Imagine your dog has been making these horribly sounding gasping/wheezing noises! What is going on? Is your dog gasping for air normal, or should you worry?

Dog Gasping for Air: Is he in respiratory distress?

Before you over-react (always keep calm, you think better calm), your dog is probably not experiencing severe respiratory distress. It is more likely your pup is experiencing something like the “reverse sneezing” condition discussed below.

But it is still important to know what could be happening!

Acute Respiratory Distress Syndrome (ARDS) is similar for both humans and dogs alike. This should be especially familiar during the era of Covid-19, the virus potentially leading to ARDS and ultimately death in many human patients.

ARDS in dogs can be caused by several conditions, including:

Signs and symptoms of ARDS can include:

Is My Dog Having an Allergic Reaction?

Is your dog gasping for air due to a severe allergic reaction (anaphylaxis)? Most dogs react differently to allergens than humans, reactions often (but not always) manifesting on the dog’s skin as a rash.

This is an evolutionary advantage for our dogs! Dogs can’t treat themselves medically and don’t have the same drugs we can use in a respiratory emergency. If a dog’s airway is closed, he would simply suffocate (unless medically treated in time).

But it is still possible.

Sometimes, a dog’s airway will begin to close due to a severe allergic reaction, but it’s pretty rare. If this does happen, we can use drugs (such as epinephrine) to help relax those passages and dilate bronchial tubes (open up the lungs). You would have to discuss this possibility with your veterinarian!

Is your Dog Panting Heavily or Breathing Heavily?

Panting is a dog’s primary method of perspiration/heat exchange. This could be due to many things, but heavy breathing might simply result from intense exercise. Can you tell the difference?

What are Brachycephalic Dog Breeds?

Many dog breeds were selectively bred by humans to have shorter skulls. Unfortunately, this doesn’t mean that dog’s upper respiratory system is shorter! It may just mean there is less room for that part of the anatomy.

This Is usually not a genetic adaptation. This happened due to human interference and isn’t beneficial to the breed’s survival.

So, what happens when you give a dog less room for air to circulate? You can start to run into breathing problems, which is exactly what happens and, in fact, there is an exact name for that condition. 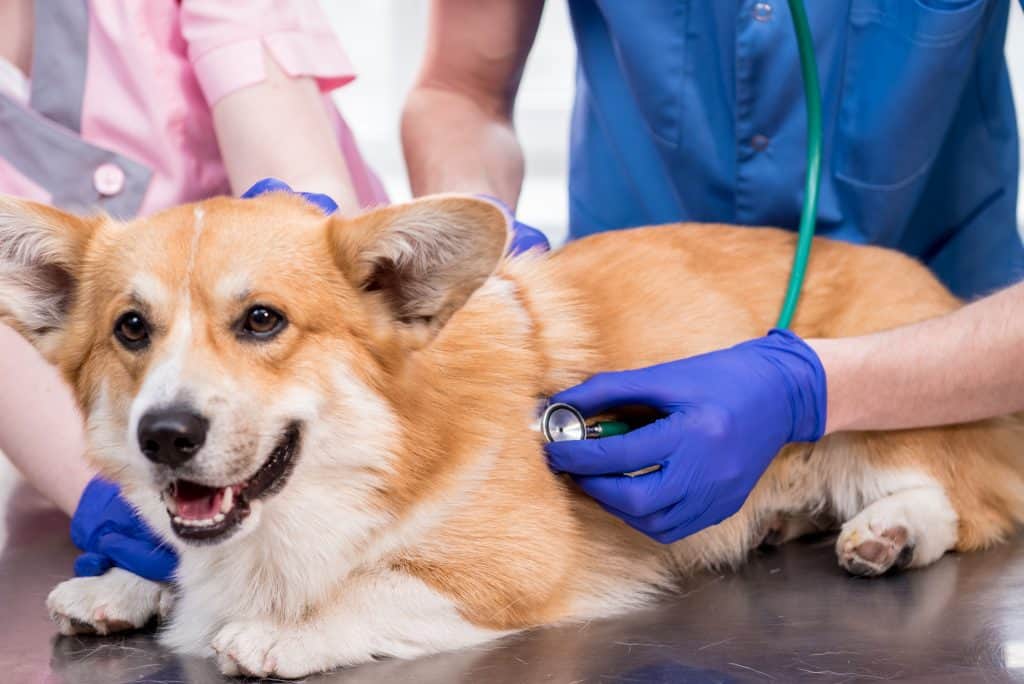 Brachycephalic Airway Syndrome is the name given to a set of upper airway issues that can affect dogs with shortened skulls.

Some Brachycephalic dog breeds include:

These dog breeds can often have trouble catching their breath, and many don’t tolerate exercise well.

Also, owners need to be cautious with these dogs if they hang around water, as they often don’t swim well.

Because of the change in air pressure, flying with these breeds isn’t recommended either because the risk for respiratory complications increases. 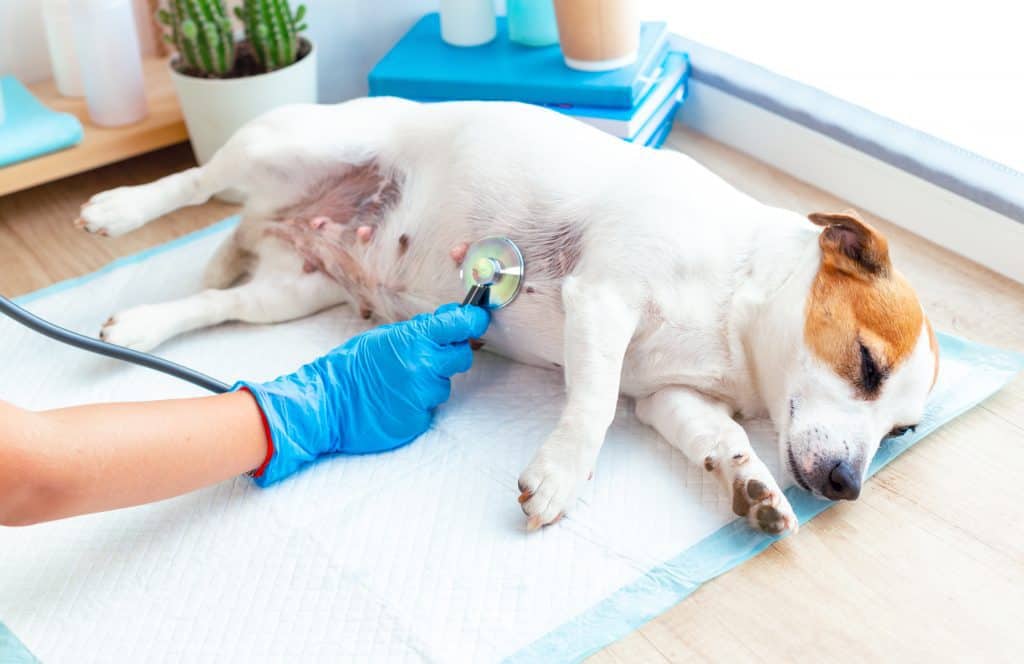 Is my dog’s trachea collapsing?

The trachea, or windpipe, is made of several rings of cartilage and connects the lungs to the throat. Your dog can’t breathe without a trachea.

If these rings lose strength and rigidity, they can flatten as air passes down to the lungs during inspiration. A collapsed trachea will make your dog gasping for air. Breeds most often impacted include:

Pressure on that area of the throat can contribute. Avoid using slip collars and use a harness that doesn’t apply pressure on the throat if your dog pulls.

What is “Reverse Sneezing” and why is my dog doing it?

Sometimes, dogs can suffer from a condition called paroxysmal respiration, or simply “reverse sneezing”. Your dog might pull in air quickly through his nose and again push it out the nose just as rapidly.

The dog will create a sort of snoring sound, seeming to inhale and sneeze simultaneously.

Though the exact cause is unknown, reverse sneezing is thought to be caused by irritation to the sinus cavity or nose. In general, it usually isn’t a cause to worry too much about but can create a perception that your dog is gasping for air. 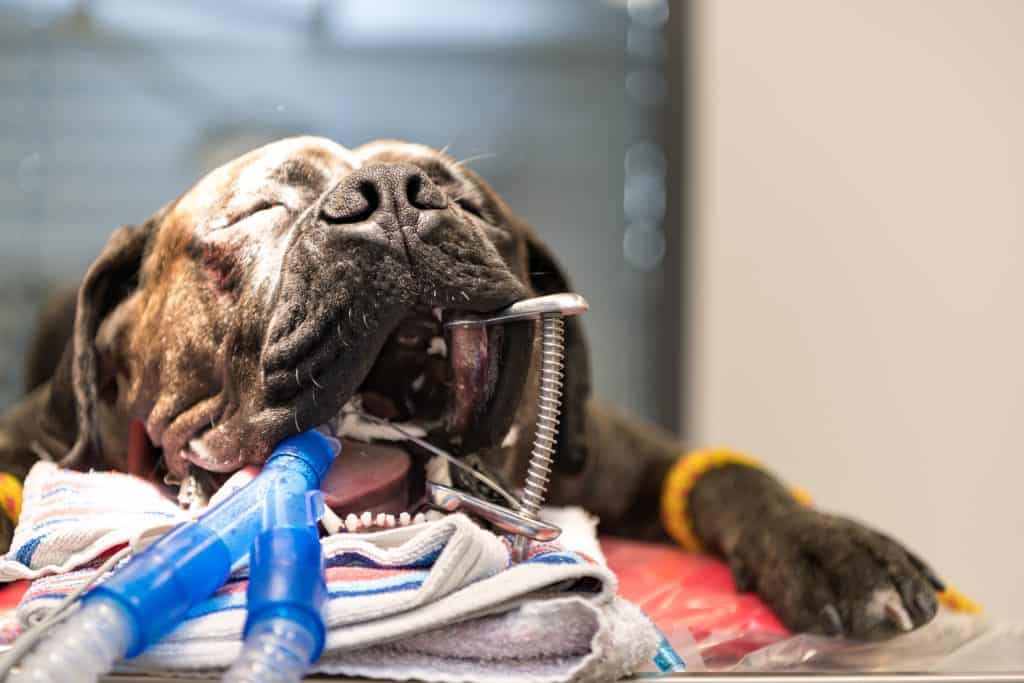 What can I do if my dog is gasping for air?

Is your dog truly in respiratory distress? You’ll have to use some of your vastly superior human judgement here. Remember to keep calm no matter what!

If your dog is indeed facing a life-threatening situation, the natural response for any dog lover is to panic. After all, they are our babies! It is very hard to think clearly when we are suffering from severe anxiety and panic. The calmer you are, the better your dog’s chances.

Dogs also often judge situations based on how human handlers react to them. A frantic human could cause the dog to become even more stressed, worsening an already poor situation.

Don’t wait to schedule an appointment with your veterinarian or wait on hold with poison control. If your dog is experiencing a true case of ARDS, you need to get to a veterinarian as soon as possible or rush to an emergency vet clinic.

Prevention tip: fluid in the lungs or chest cavity

This is common in older dogs and often connected to either lung or heart disease. Regular veterinary checkups are even more important for older dogs.