If you have ever owned a husky, you know they can be full of sass and drama and they love to talk. This breed is also known for a few unwanted personality traits, usually regarding aggression towards small dogs. People ask, “why does my husky attack small dogs,” but the answer is not always that simple.

The main reason is that huskies have a high prey drive and many behaviorists speculate this trait comes from when their ancestors used to hunt smaller critters for food and survival.

Prey drive is often the main motivator with attacks on smaller dogs but is often not the only one. There can be many reasons why your husky is showing aggression and attacking small dogs and other animals. Below is a list of possible explanations and ways to fix the problem.

Why Is My Husky Attacking Small Dogs?

There are several explanations for why your husky may be displaying aggressive behavior towards or actually attacking a small dog or other animal. Besides the excuse of their naturally strong prey drive, they may also be trying to protect you or themselves or just be lacking in the socialization department.

Huskies And Their High Prey Drive

Huskies are clearly not the only breed that displays these unwanted aggressive behaviors due to their overactive prey drive, but they are notorious for going after smaller animals, like other dogs and cats.

Having a high prey drive is something that is normal and valued with working breeds of dogs like those who herd cattle or do bird retrieving. Although, for just the average pet parent, these behaviors may become unmanageable or potentially dangerous in the wrong environment. 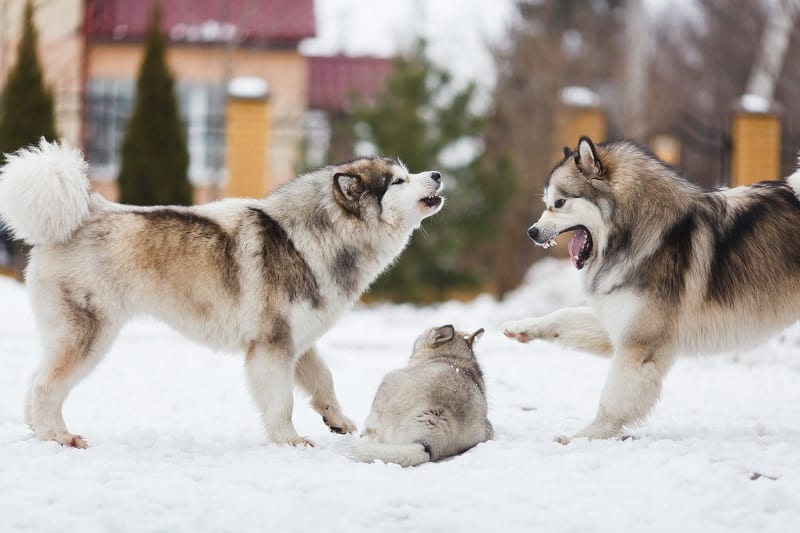 Other dog breeds known for having a high prey drive are Alaskan Malamutes, Australian Cattle Dogs, Jack Russel Terriers, Whippets and many more. These dog breeds also range significantly in size and temperament.

Lack Of Socialization with Small Dogs

Socialization is extremely important in desensitizing your dog to certain distractions, animals and people. Many dogs are unfortunately unsocialized and this can lead to dangerous situations when they are introduced to something new and different. Let’s be honest, situations like a pandemic don’t help!

It is important to take appropriate steps when introducing your husky to another dog. Always have them on a leash and keep their focus on you when others are around. Teaching them that the smaller dog is not food or a toy is a first start to preventing scary situations.

Be sure to have control in this environment with your husky. Again, always have them on a leash and in your field of view. Not watching or understanding Husky body language signs and not familiarizing yourself with your dog’s social cues could end in disaster if you allow yourself to become distracted.

Unfortunately, it is possible to teach your pet to do something undesirable, such as an aggressive behavior. If your method of trying to get them to stop an unwanted activity is to feed your husky a treat or coddle him, then you have only reinforced the negative trait. 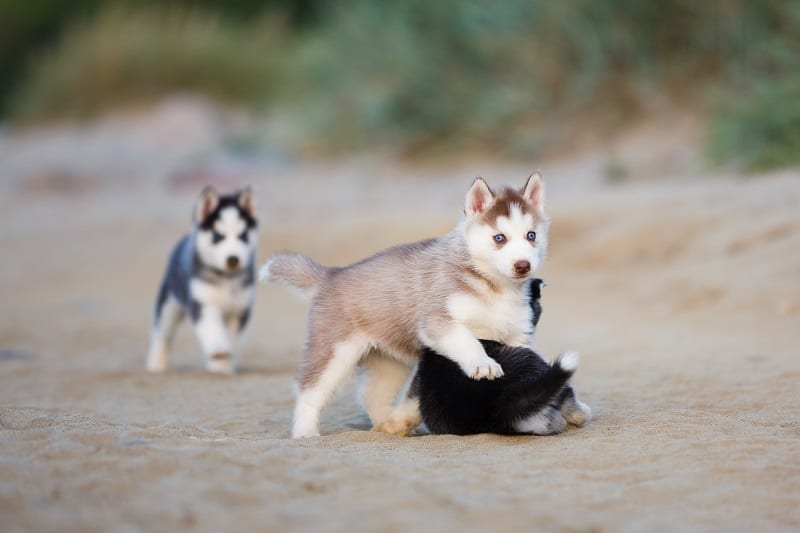 Not enforcing a negative behavior with a positive one will help them understand what is acceptable and what is not. Even if they or the situation is causing you anxiety, keeping calm and regaining your control over them is necessary to help deescalate the event.

Why Does My Husky Attack Small Dogs? Need to Dominate

Huskies are a naturally bossy and domineering breed of dog. They like to argue with owners and tell them how it is. Asserting their dominance over other dogs is not unusual for this breed and if they don’t feel the smaller dog submitting to them, they may use force.

If your husky is displaying these dominating behaviors with you or other dogs, then it would be important to provide training. Breaking them of the mindset that they are always the boss is safer for everyone in the household. They should always view you as their boss, not the other way around.

Many dogs will show aggression if they feel like they need to protect their owner from someone or something. Letting them see that the little dog is not a threat and is a friend would be the first step in teaching them to curb their aggressive tendencies. 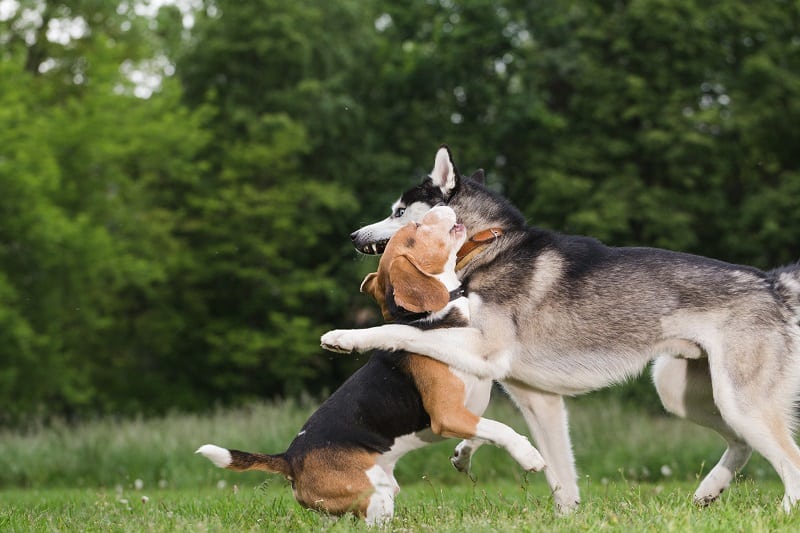 In some situations, the little dog is the initial aggressor, triggering your husky to react negatively toward him. If this is the case, then removing your dog from the situation would be best. If this is not possible, then keeping them separated until both dogs can socialize appropriately would be necessary to avoid any fighting.

Keep both dogs on a leash at all times when they are around each other!

How Can I Keep My Husky from Attacking Small Dogs?

Training is an excellent resource for many owners when unwanted behaviors are seen, especially ones with aggression towards other dogs. However, not every case is going to be a success. Age and temperament play two very large roles in how the dog will respond to training.

Having your dog on a leash when in unsure environments with other dogs or animals is safest for everyone. Your dog should be able to pay attention to you when it is leash time and making sure that they will respond to your commands is crucial in having total control over a situation.

Your dog should sit on command and should not be ignoring you. If you struggle to get your dog to focus while on a leash you will need to stop this type of activity until they can control themselves.

Redirect And Focus Their Attention on You

Redirection and focus on you as their owner are key to keeping your dog in line. Awareness and recognizing the behavior before it actually happens will help prevent any altercations.

Food is often a good motivator for keeping your dog’s attention on you. If they prefer a toy, then use them. Keeping your dog’s focus is what will truly help minimize any undesired activities. 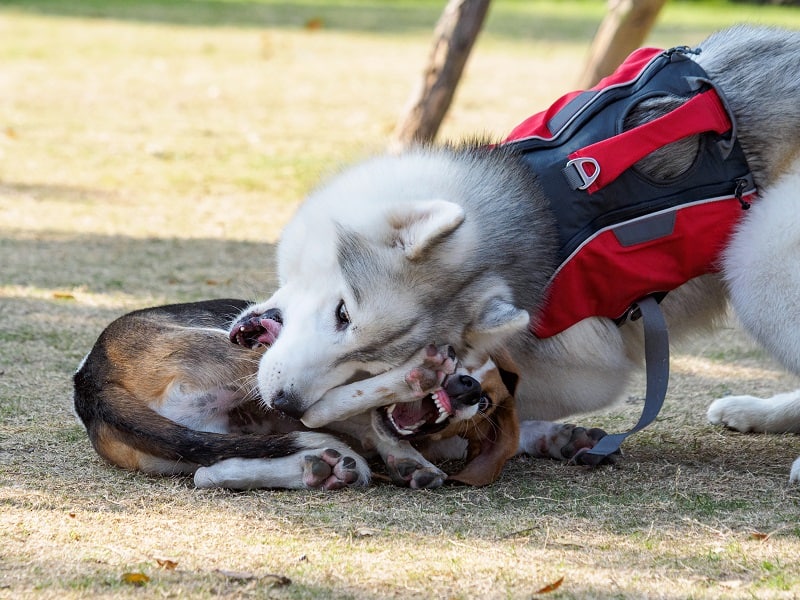 What If My Husky Lives with A Small Dog?

Sometimes fighting will occur among canines that live together, such as your husky and a small dog. If they were introduced into this situation later in life, then some precautions may be necessary to protect everyone in the home.

Keeping your husky on a leash until he can be trusted around the small dog is crucial. This is when using treats as a way to keep their focus on you is most important. You would also want to have the small dog on a leash as well to ensure it doesn’t get into the husky’s space before he is ready.

Unfortunately, the answer is mostly dependent on your husky and the steps you are willing to take to fix his behavioral issue. Sometimes success is seen when training, socialization and desensitization are performed. In rare cases, the husky is never broken of this unwanted behavior and is simply kept away from small dogs and other little animals.

Age – Can You Teach an Old Dog New Tricks?

The age of the husky does matter, but it doesn’t mean that an old dog can’t be trained. It is less likely that a long-time, bad habit and ingrained behavior like aggression can be broken from a much older pet that is stuck in his ways. 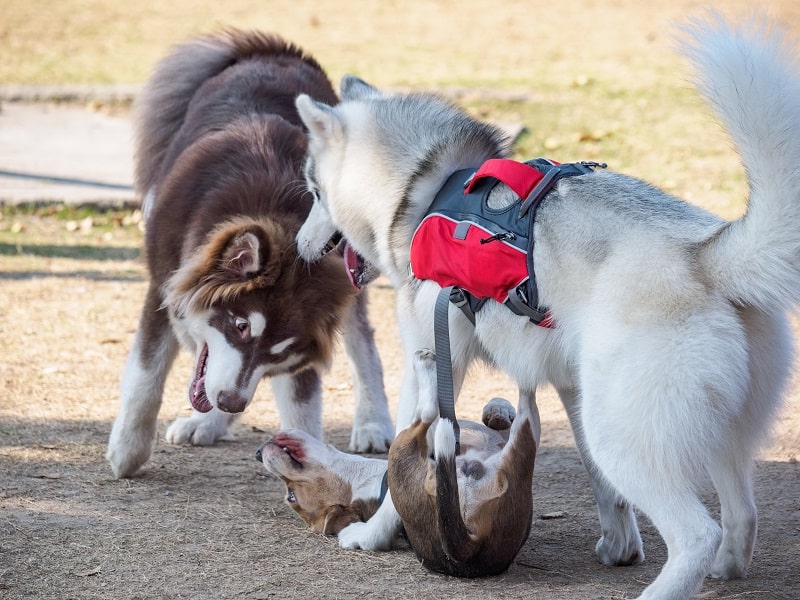 It is true though that a young dog will be much more impressionable and easier to train. They tend to be more amenable to direction and less stubborn about changing a bad or undesirable behavior.

This is why you should always socialize your pup with other dogs and people when they are young. Usually getting them comfortable with the idea of new places, humans and animals by the time they are only 3 or 4 months old will help significantly with fear and aggression in their future.

The husky breed was not created to be a protector or territorial, therefore, aggression is not necessarily common. While their aggressive nature towards small dogs is known, the majority of the dogs will friendly with people and other animals.

Your job as an owner is to start your dog off on the right foot with socialization and training, in order to ensure that they don’t develop any dangerous or unwanted behaviors.

Why does my husky attack small dogs? A lack of one or both of these crucial exercises can explain why and lead to potentially scary situations!