It is common for a dog to conscientiously eat grass. But why does my dog eat grass and weeds? Is this a way to purge himself? Does the herb act as an appetite suppressant or a food supplement? Is this normal or dangerous? Should you let your dog do it?

The following paragraphs provides all the answers to your questions.

Why does my dog eat grass and weeds?

Several hypotheses have been put forward to understand the behavior of a dog who eats grass. Let’s review them.

We can notice that the type of grass ingested by the dog is very particular carefully selected. Indeed, it is mainly quackgrass which has no known purgative properties, but is diuretic and depurative (urine and digestion).

The faeces generally do not have characteristics that would indicate an intestinal “cleansing”.

We do not find in this herb any antiparasitic principles (worms, tænia for example) which would allow the dog to deworm (internal destruction) or to evacuate parasites. Wild garlic, for example, which is a real natural dewormer, is not spontaneously ingested by the dog. 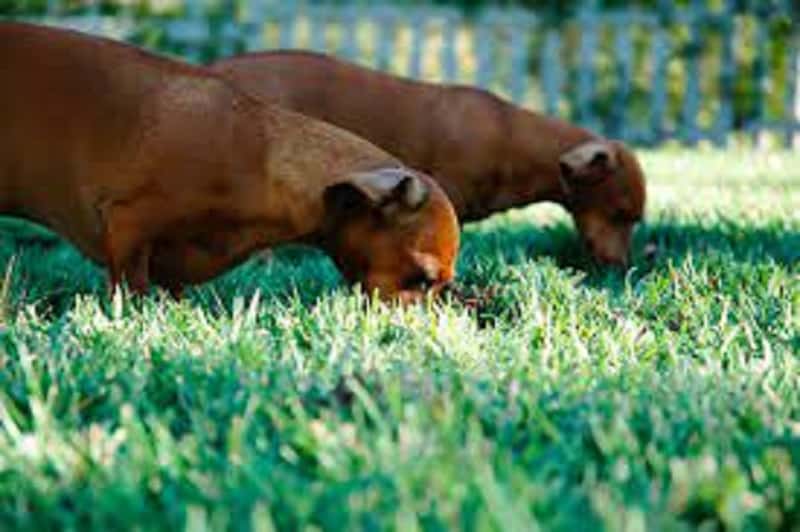 However, we observe that some dogs eat grass very occasionally to make themselves “voluntarily” vomit while others consume it regularly without, or rarely, vomiting. We can therefore think that the dog may feel the need to evacuate certain substances, without this being generalized or systematic.

Why does my dog eat grass and weeds? As an appetite suppressant

In times of food shortage, it is common for canines, especially the gray wolf, to ingest grass and / or soil. On the one hand, the earth is made up of nutritious bacteria which can keep the metabolism functional for some time. On the other hand, the herb provides hydration and a filling of the stomach avoiding the pain (stomach crying starvation).

But as the digestive cycle of the dog is greatly shortened compared to that of the wolf (8 to 12 hours for the dog against 32 to 36 hours for the wolf), it is difficult to think that between two meals the hunger is so intense that it requires filling the stomach.

We can notice that this type of grass has a very slightly sweet taste which corresponds to the taste perception of the dog. Indeed, both dogs and wolves appreciate certain fruits and berries (vitamins, natural sugars). But from there to think that the dog offers himself a little treat on a walk, it’s a bit far-fetched.

As a dietary supplement

It is sometimes argued that a dog fed only meat would suffer from a dietary imbalance. However, several arguments invalidate this theory. The type of herb ingested has no vitamins or minerals and has no caloric value that would make it a food supplement. 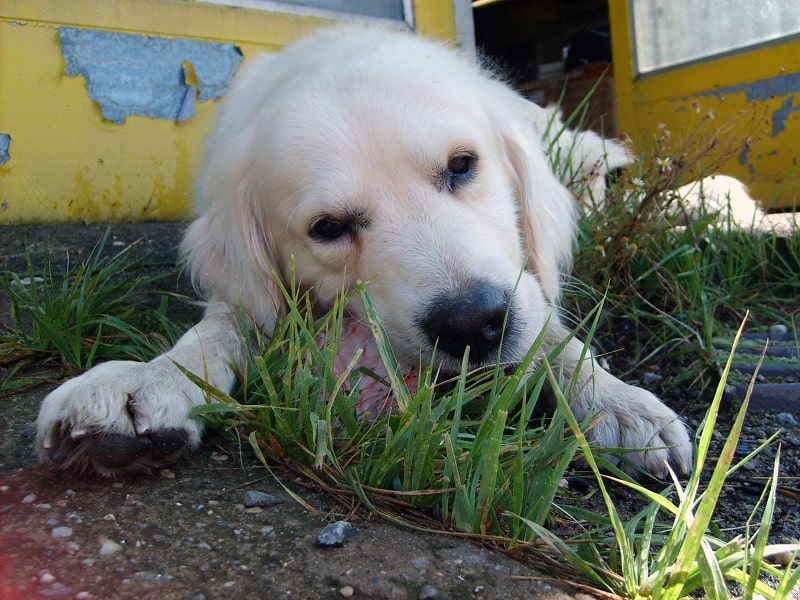 On the contrary, it is quite poor in everything. Many other common plants (wild spinach for example) would be much more suitable.

It is not specific to meat-fed dogs to eat grass, some hardly ever do. Plus, adding vegetables and fruit to meat doesn’t stop weed ingestion.

Nearly 85% of dogs are fed industrial food (branded, organic or veterinary) and are proportionally more concerned by the consumption of grass. Even vegetarian dogs, who have neither more nor less health problems than others (by following certain specific rules), ingest grass.

Why does my dog eat grass and weeds? An eating disorder

The ingestion of earth, sand, plants, gravel, and even coprophagia, would be a deviance in eating behavior called “PICA”. With respect to coprophagia, it is most often observed that it is industrial food which causes it. The partial digestion of certain ingredients has the consequence that the vitamins and synthetic flavors are found in the excreta, which them makes it “edible” for other dogs, even for itself.

Urine can also contain these substances and make certain indigestible ingredients edible (earth, gravel, sand, indigestible or even harmful plants). Some chemicals blown in the wind can also have the same effect.

It’s worth noting that the smell and not the taste guides the dog to an ingredient. By trying to deceive his flair to make everything and anything appetizing to him, the dog actually reaches a form of deviance in his eating behavior. 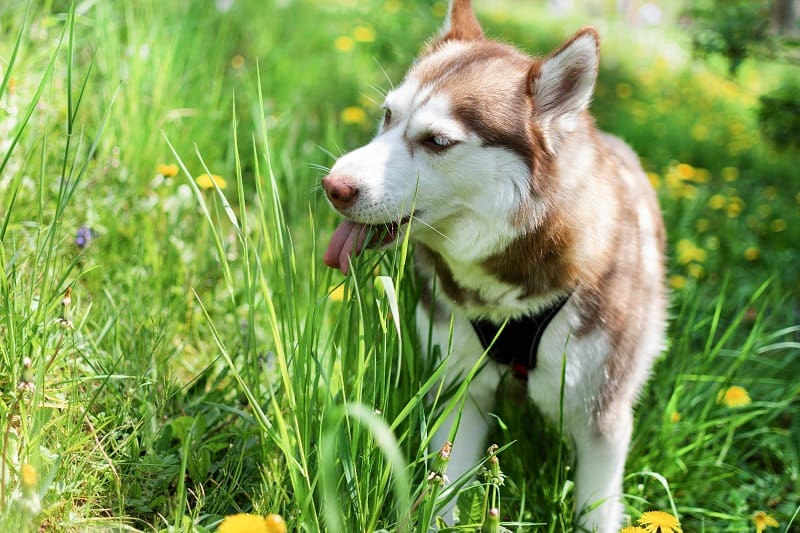 To hydrate and digest better

If there is one characteristic linked to quackgrass, it is its very high water content. We also notice that the grass ball that is found in the excrement comes out relatively dry and undigested, which can reasonably be expected to have been freed from the water it contained.

It is a common practice for many wild animals to consume grass for hydration. It would even be preferable for the dog and particularly his renal system (storage of urine for marking) to promote as much as possible a good dietary hydration (meat and raw vegetables). This practice could then be correlated with the diuretic virtues of quackgrass which would thus improve the functioning of the renal system.

While it is undeniable that the ingestion of grass has natural (hydration and sometimes digestion) and phylogenetic (specific to the species, ancestral) causes, some cases require special attention.

Why does my dog eat grass and weeds? Vomiting

If the dog suddenly begins to eat grass and vomit repeatedly, something is wrong and a veterinarian consultation is necessary. The presence of blood or abnormal material in the vomiting should also alert you and lead to a consultation. Occasional vomiting bile requires a little monitoring for a few days but may be perfectly normal (it is often the case). 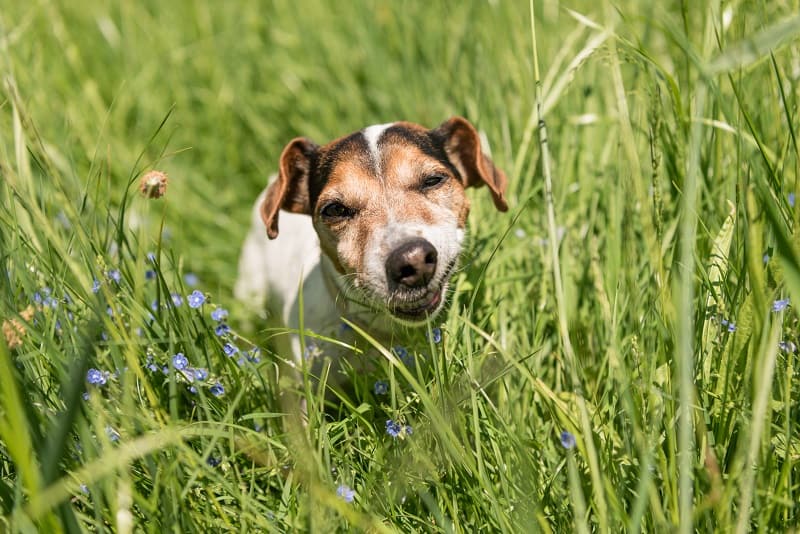 If the grass ingestion is followed by diarrhea or a significant change in the consistency or composition of the feces, whether it lasts or repeats, don’t let it drag on either.

A dog who will eat a little weed or soil from time to time is not abnormal. But if this behavior sets in or appears suddenly and the dog swallows a bit of everything, see a behaviorist as soon as possible to identify the cause (lack or incomprehension of relationships, lack of stimulation, unsuitable space, substitution behavior, etc.). Tests may also be necessary (blood, urine and feces).

Should you let a dog eat grass?

Ingestion of grass by a dog is normal and corresponds to a poorly understood need, perhaps only phylogenetic (ancestral). But an animal, by definition, knows what is good for it, and the general opinion would be more in favor of letting it be. 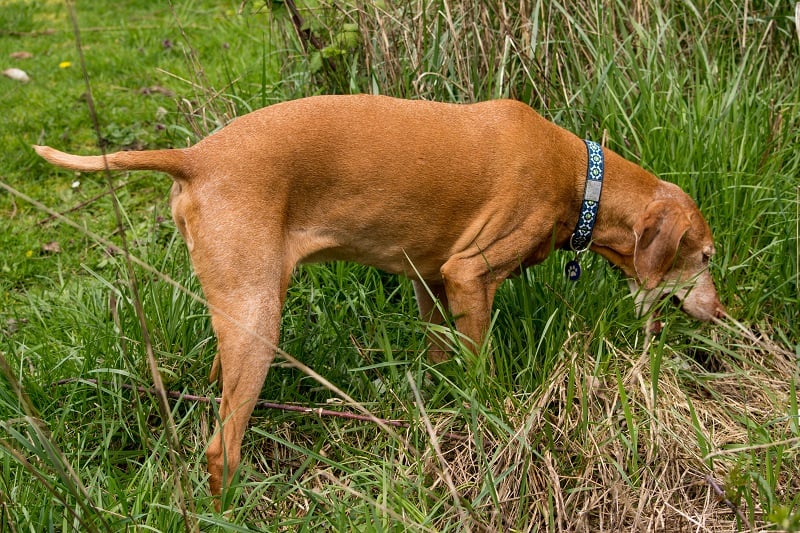 However, vigilance must be constant, for various reasons. Consumption of the herb can indicate a clinical sign that can range from a simple transient digestive problem to intestinal obstruction. The grass can be contaminated and cause very serious conditions such as parasites and bacteria like Staphylococcus aureus (gastro, spondylodiscitis, leukemia, etc.), poisoning (pesticides, toxins, etc.), various and varied diseases, etc.

In general, sudden and unusual ingestion of grass and weed, or causing sudden, abnormal and repetitive phenomena (especially over a short period), should be treated as soon as possible. Regular deworming of grazing dogs is essential and elementary, whether naturally (garlic) or chemically.