Dogs howl from time to time as a response to their environment. We often find dogs howling at loud sounds such as sirens but no breed of dogs howls like good old huskies do. Husky owners notice that their pals howl more than other breeds. But, why do huskies howl? Are they being dramatic or is it just in their nature?

Why Do Huskies Howl? Here’s why

While it is true that your huskies can be a little dramatic, their howling has been passed down to them from their ancestors. Evolutionary biologists have shown that all domestic breeds of dogs are descendants of wolves, however; huskies are much more closely related to wolves than other breeds containing about 25% of their genetic attributes which sums up their uncanny resemblance to that of wolves. Their howling is also a result of that.

What is Your Friend Husky Trying to Tell You When He is Howling?

There is an extremely popular myth that huskies howl only as a sign of sadness or loneliness which in reality could not be further than the truth. Yes, huskies do use their howls as their prime way of communication rather than barking but it certainly does not mean that they are expressing such feeling.

Many wildlife scientists have tried to crack the code but no one has been able to align the patterns. In short, we have yet to fully understand why huskies howl.

Here, we might as well bust another old myth. It is widely thought that wolves howl at the moon. Now, wolves are very closely related to huskies. If that was true, it would suggest that maybe huskies would also howl at the moon but that is highly incorrect. None of them howl at the moon. There is an explanation for that. Wolves are predators. They hunt at night.

Whenever they spot prey, they howl to express excitement. Also on those cold nights, it was easy for them to reach their pack through loud howling. Even though their descendants have been domesticated and do not need those behaviors anymore, they still have them. Now, they use their howling mostly to grab their owner’s attention. It certainly does not mean that they are always howling out of loneliness.

To know why a husky might be howling; it is extremely important to understand their body language. 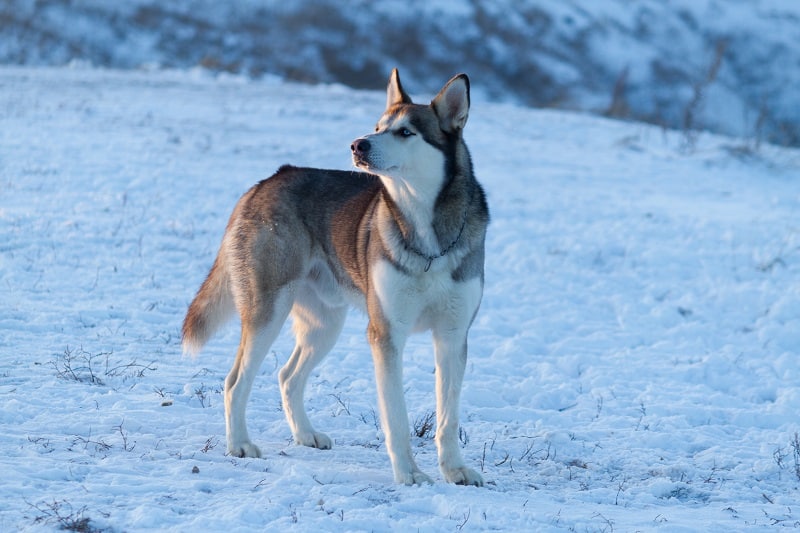 Why do huskies howl? A look at 3 main causes

You may listen to music in the company of your dog and see him start to howl. You might even have thought that this reaction was due to your dog not being comfortable with this type of stimulus, but according to experts, this is usually not the case. So why is your dog playing wolf?

A dog that howls while listening to music is actually trying to accompany the melody with its howl. Obviously he does not try to reproduce the same melody, but by his howling he participates in the music and tries to interact with it.

According to current knowledge on canine behavior, a dog who is howling is not disturbed but rather he expresses pleasure in the melody being played. So there is nothing to worry about when faced with a dog who plays wolf to the sound of music. 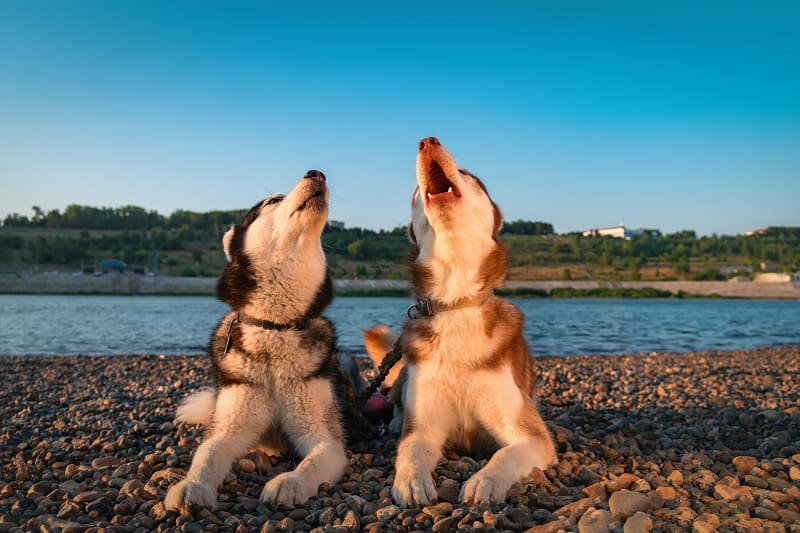 Is a dog always comfortable with music? Of course not, but in this case your Husky will not howl and try to move away from the sound source. When listening to music, try to ensure that your dog has a quiet place to go if he does not want to be exposed to the sound stimulus.

The high sensitivity and highly developed hearing that dogs enjoy in general are still the subject of many studies today, so we have a much better comprehension of a dog’s senses. 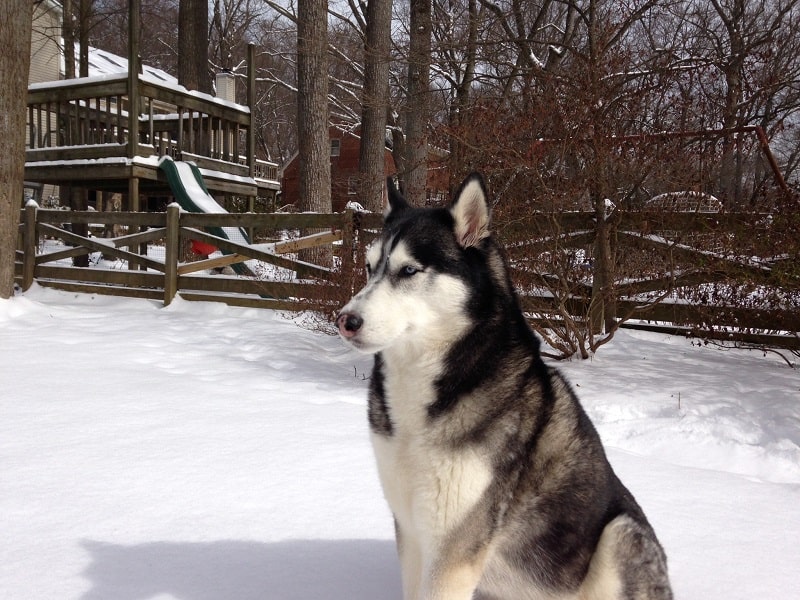 Besides the fact that this is a high pitched sound that can sometimes be annoying for some dogs, there are other reasons dogs howl when an ambulance passes.

Sometimes dogs howl when they hear sirens because it reminds them of the howls of their fellows.

It’s important to point out that howling itself has several social response meanings, the most relevant being sadness, social isolation or fear of being alone.

Remember that dogs communicate their emotions in different ways, for example through vocalization and body posture which allow them to express themselves properly. This helps us assess their needs and understand certain behaviors they may adopt.

Even if no animal is in distress, the dog can sense a call for help, so he responds to it. In addition, dogs also communicate their presence in this way. 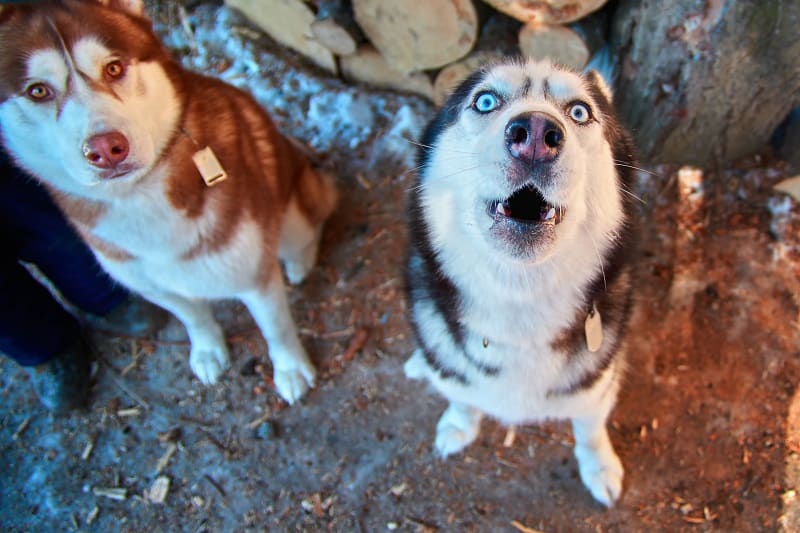 When Do the Howls Begin?

Although puppy huskies do not fully howl, they try to make some grunting noises that resemble tiny howls especially when they get to the age of 3-4 months. A husky typically starts howling when he is around 6-7 months old but it does not always have to be the case. It can vary from dog to dog. That number is just a general rule. Also, did you know that not every husky howl? If your husky is not howling check out the next section!

Why Your Pup is Not Howling Yet?

There may be a lot of reasons behind that but one thing is for sure that there is nothing to be worried about when a husky does not howl. Huskies have this trait embedded in their behavior. They naturally howl sometimes to communicate but just like humans, not all huskies are the same. Some pups just do not want to howl and that is completely all right.

Maybe they have not picked up that behavior. Huskies are more likely to howl readily when they are surrounded by others like them. If your friend is not around other huskies, he may just never learn to howl.

However, if your dog has suddenly stopped howling after doing so for a long time something might be up:

They can stop howling because of age. Indeed, as they grow older, they tend to lose their hearing abilities which can stop them from hearing noises that usually trigger their howling. They can also stop howling when they are not feeling well or have been injured. So, pay attention to their behavior and take good care of them! 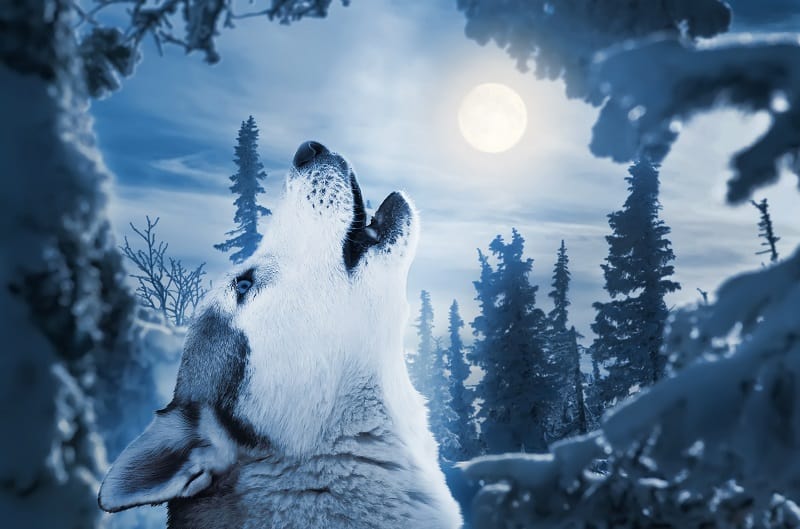 How to Stop Excessive Howling?

That is all your pup needs to reduce his howling. It is necessary to keep in mind that this behavior is deeply embedded in their genes so you can never stop them from doing it when they are exposed to signs triggering their howl. They might also howl to get your attention or when they are excited to see you.

So, training might never completely stop them from howling but it will help in specific situations, such your husky howling at night and constantly waking you up … and the neighbors!