Every dog owner must have watched in amazement, at least once in his life, his loyal companion happily chewing his bone. For a dog, nothing can truly replaces a bone. But why do dogs like bones so much?

It is strange that a dog continues to chew the bone even though there is no more meat around. Not only does he chew it, but he completely crushes it. At the end of the meal, he will have swallowed most of the bone. 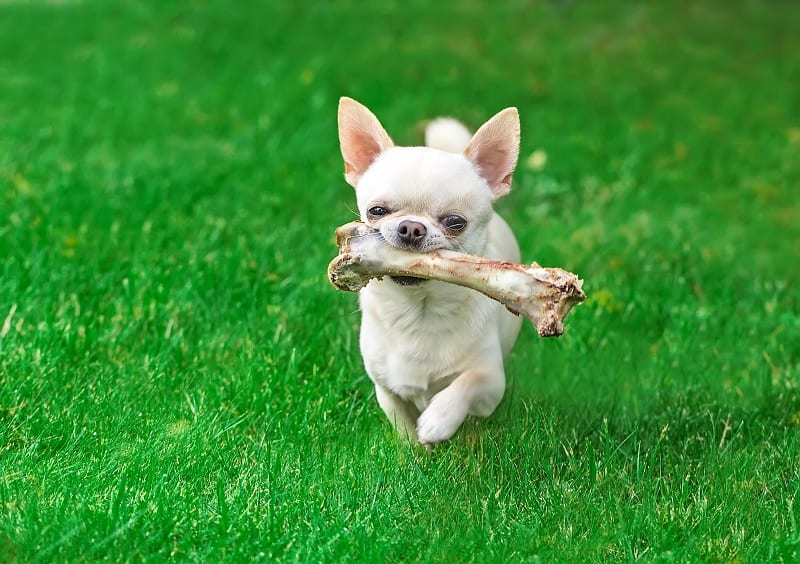 It is intriguing to see an animal so crazy about such a mundane thing. The dog loves the bone so much that he can spend hours working on it.

Ever wondered why dogs love bones?

There are a few good reasons dogs are attracted to bones. First of all, they can be tasty mainly because of the meat left around. And they are also very nutritious, not that dogs are aware of this. The meat on the bones is high in protein, the bone marrow is high in fat, and the bones themselves are high in calcium. 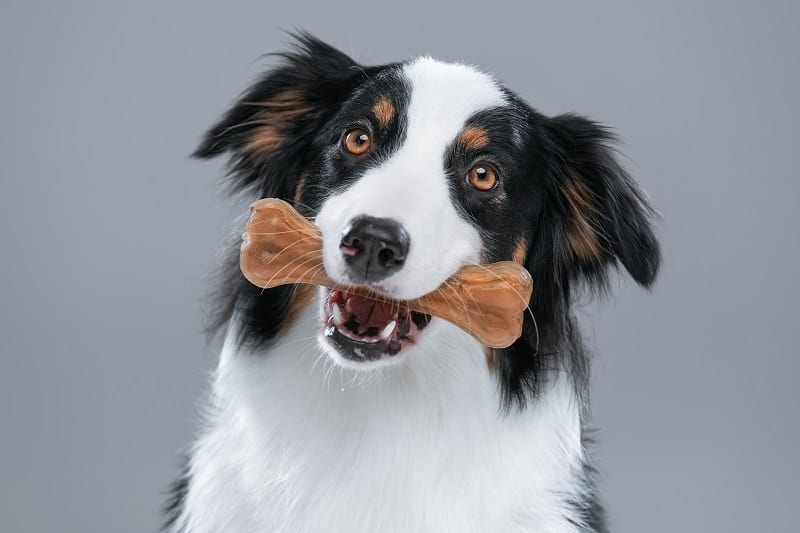 For the pleasure of chewing!

Chewing bones is also fun for dogs. They also love to chew anything they find in their path, it is an innate need for them. Whether it’s bones, shoes, furniture, or anything else lying around your home, dogs won’t miss an opportunity to gnaw on anything.

But chewing also calms boredom and can stimulate the release of endorphins, which are the hormones associated with happiness. Chewing also brings benefits for dogs’ teeth. The repetitive rubbing of bone against their teeth helps remove plaque and thus helps reduce tartar buildup. 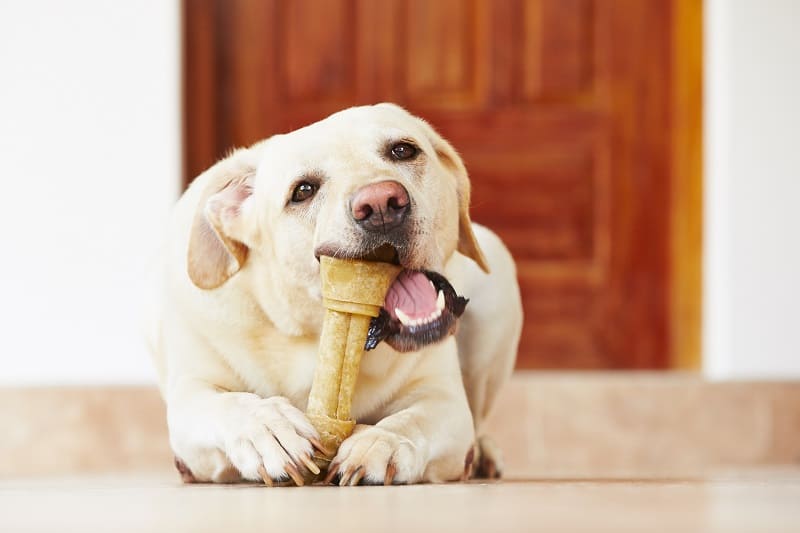 It’s great to give your dog a bone, but not just any bones. Some cause serious health problems, including injuries to the esophagus, stomach and teeth. Precautions must therefore be taken.

An ancestral activity, gnawing bones is one of the greatest pleasures of dogs, who consider them to be real treats. Moreover, several benefits are attributed to chewing a bone.

The first being the preservation of the oral health of the animal. Thanks to the friction of the teeth against the bone, dental plaques causing the appearance of tartar are gradually eliminated. This complements well a periodic brushing of your dog’s teeth.

It also cleans the inside of the mouth and ensures better breath for the animal. And since bones contain minerals like calcium, all of these properties are beneficial for the dog. 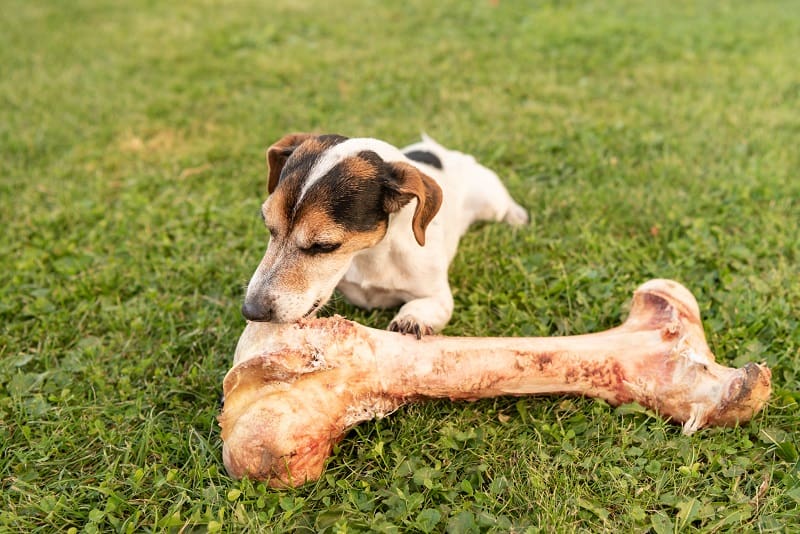 What bones to give him?

In view of its many benefits, giving bones to your four-legged friend is therefore highly recommended. However, you must choose them carefully because not all are suitable for your dog. Rabbit and chicken bones as well as fragile, pointed or breakable bones are to be avoided.

Because they break easily, bones become sources of injury such as bleeding from the rectum, broken teeth, bleeding from the gums and tongue, bones stuck in the esophagus causing digestive problems. Surgery may even be needed in the event of trapped fragments.

The best bone for dogs is beef marrow bone, preferably from the middle of a femur. This type of bone is hard and will not give in to pressure from the jaw. Raw bones are preferred because they are less easy to chew on.

However, it is important to pay particular attention to the sanitary quality of the food so as not to cause food poisoning. The bone should also be large enough that the animal cannot swallow it, thus preventing intestinal obstruction or suffocation. 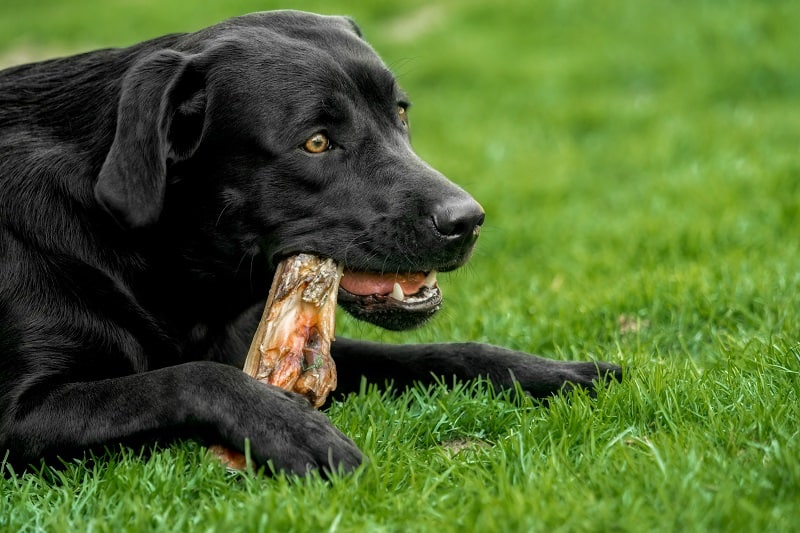 While your dog is eating the bones, it is important to supervise the dog to ensure that he does not swallow his treat all at once or sizeable fragments. He must stay alone in a quiet corner because he can become aggressive if you get too close.

Children should understand that they should never disturb the doggie when he eats his bone. He might believe that they want to take it from him and as a way to protect it he may have a negative reaction.

Why do dogs like bones so much? Final tips

Another important point is that it is absolutely necessary to take the bone away before the dog buries it somewhere. Under the ground, the food can rot and become fragile, which can be dangerous for your canine friend.

Make sure you distract your dog away from the bone and quickly pick it up and trash it.

With respect to frequency of consumption, it is recommended to give your dog a bone once or twice a month. This will be more than enough to satisfy his needs and will limit the risks of food imbalance and digestive disorders.

Also, check out this article: Can Dogs Eat Rib Bones?