Ever wonder why do dogs lick other dogs? The question every dog owner asks from time to time. The answer may surprise you. Dogs lick each other in order to show affection and dominance as well as for grooming purposes.

Some dog owners even ask if it is because they taste salt or sugar on their tongue? Nope! It’s actually part of the dog’s instinctual behaviors passed down through generation after generation since the wolf’s age.

So next time you see your pup licking another pup, you must know what is they really trying to say with that wet sloppy kiss?

Why do dogs lick other dogs?

The one thing that all dogs love to do is lick themselves and other dogs. But why? The answer may be in what they are licking. When observing their beloved pups closely, owners have noticed some interesting patterns regarding what gets licked most often. 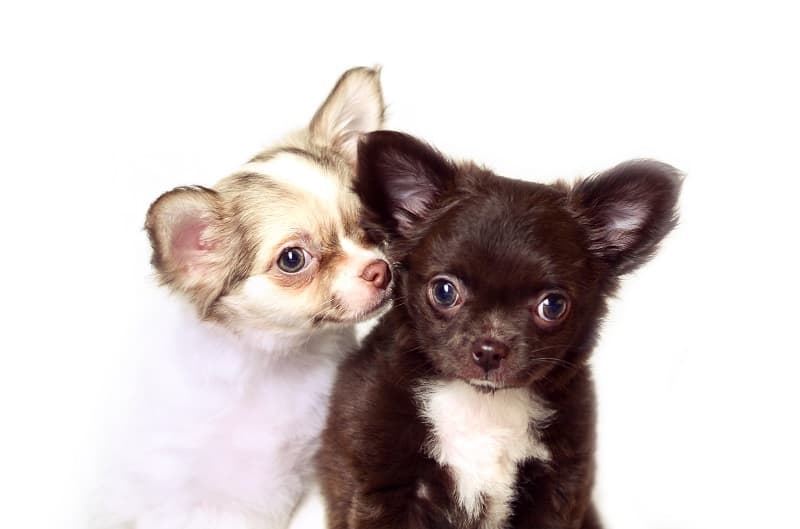 There are many different areas of the body that may be the object of interest but here the 3 main ones:

Dogs have a special obsession with their ears. Some dogs start playing with ears of other pups as soon as they are old enough to walk. And this is especially true of puppies who find the floppy, wagging ears irresistible and exciting.

Luckily most adult dogs will indulge a little playful ear tugging from their puppy friends. Not all adult dogs like this behavior. Many adult dogs growl or snap back to tell the pup that they’ve had enough of this game.

Dogs have a variety of ways to keep themselves clean and well-groomed, including licking. Dogs may lick ears of other pups when they’re sleeping near one another or as part of their grooming habits. This can indicate that the dogs enjoy interacting with each other on a more intimate level, especially if it is reciprocated.

Dogs have been known to emit pheromones from the skin near and around their ears. The effect of pheromones is to attract other animals, and it appears as though this applies even when they are adults. 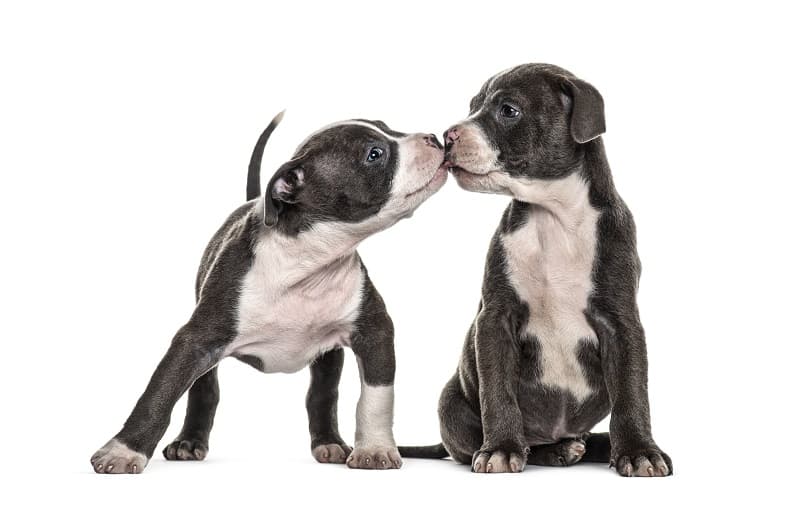 Similarly, when a dog licks the ears, they may be trying to signal that they are not about to fight. Sometimes they do this to ask for forgiveness after playing rough.

Why do dogs lick other dogs? The mouth area is attractive

Puppies do things that may seem gross to the average person, but they’re actually just following their natural instincts. Puppy licking behavior comes from when puppies would lick their mother’s mouth and hope for her food in return. This action was meant as an “encouragement” for the mother dog so she would regurgitate food back up for them.

As dogs grow, they may still lick faces to greet other dogs and people. When a dog jumps on you, he is trying to come near your face to say “Hello”. You often see them licking other lips or mouth when greeting because it’s like saying, “I’m friendly”.

However, a dog may engage in this obsessive behavior because he lacks any other socially acceptable way to initiate play.

Dogs spend so much time licking each other that they know when something is amiss. Some dogs will lick inside the mouths of their pals, trying to find a sore or tumor. In some cases, one might try this because he senses something out of the norm in his friend, like an infection in gums or even a tumor growing in them. 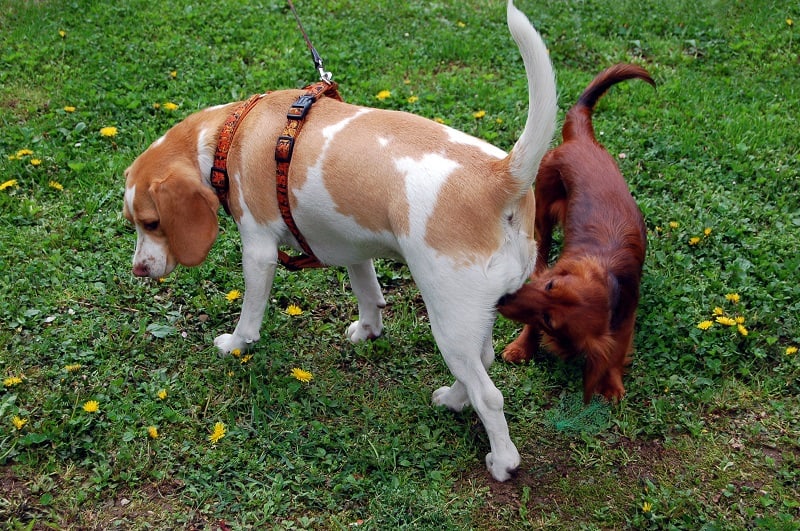 When two dogs meet each other they’ll be curious about each other’s private parts. Apocrine sweat glands that emit pheromones are present all over the dog body, especially in their rear area. These pheromones can trigger a response from another animal nearby or even detect one from further away.

Due to these pheromones, dogs are naturally drawn towards these areas. When dogs smell the rear area of other dogs, they learn things about other animals like their health, age, mood, and gender.

If this is an ideal greeting, the dogs should be satisfied with a quick glance at each other’s private areas. If a dog continue to lick another too long, this may signify that they want to spend more time together. They will eventually have their needs met by way of either spending some quality alone time or initiating playtime.

A sudden obsession of licking another dog’s genitals can often mean that the otherwise normally healthy animal is sick. Dogs who suddenly enjoy licking a fellow canine may be trying to communicate something about their health state as well. 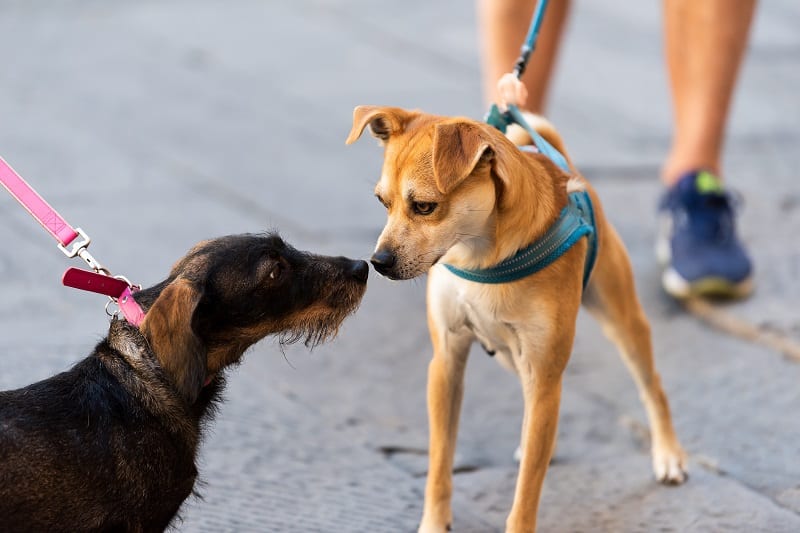 Why do dogs lick other dogs? Is it normal?

Licking other dogs is a sign of social behavior, but, if this behavior, continues for too long, it is sign of an issue that requires investigation. If you notice your dog licking himself or other dogs more than usual, it may indicate some sort of illness that the vet should investigate to diagnose the exact medical condition.

What to do if persists for too long?

We all know that dogs are curious when they see something new, but if yours can’t seem to stop licking other dogs in sight no matter where he is, there may be something more going on than just a little boredom or natural instinct. There could also be medical problems behind the behavior that needs addressing before your pup ends up hurting himself and others around him.

If your dog’s behavior is becoming obsessive and it interferes with his quality of life, there are steps you can take to help him. It may be helpful for both the dog and owner if they engage in environmental enrichment as well as physical activity. If these efforts don’t work or have been unsuccessful so far, consult a trainer on how to address the issue more effectively. 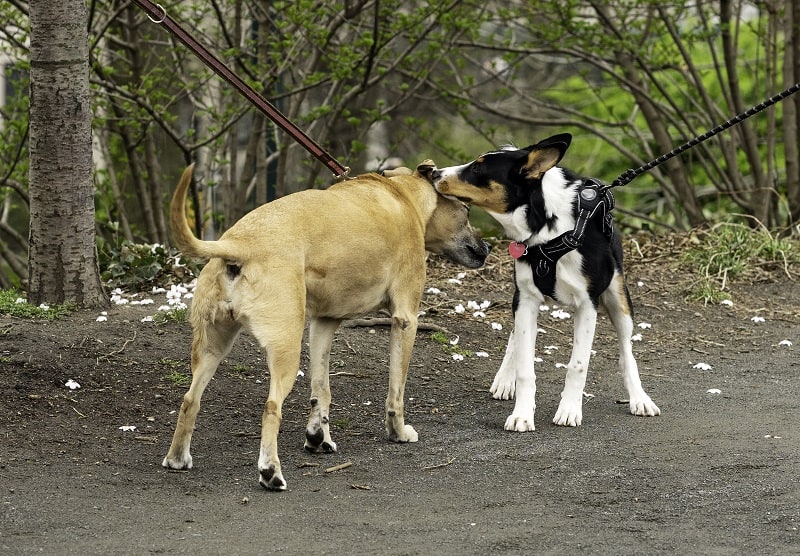 Why do dogs lick other dogs? Final recommendation

Dogs lick other dogs for numerous reasons, but if this licking is more than normal, it is a serious problem. You should keep a close eye on your dog and identify the reason he is doing it and quickly consult with your vet if you find something seems