After peeing on the ground, a dog may engage in an unusual action, such as kicking his legs against the ground, which dog owners may find difficult to understand. Why do dogs kick after they pee?

Dogs may have their own set of valid reasons to kick back with their legs after peeing, but here in this article, we discuss all the reasons behind this phenomenon. After all, dogs are able to communicate and provide us with their particular explanations; we can only make educated guesses. So, here are intriguing “possibilities” that could be at the root of this strange behavior.

Why do dogs kick after they pee? A Matter of Scent

A dog’s nose is in charge and plays a significant role in various canine activities, from sniffing the ground to the rears of other dogs to even kicking back with the hind legs shortly after peeing.

The message dogs send when they conclude their business rather than setting up a cover-up is that they are not satisfied with the situation.

The interdigital glands on the feet of dogs produce scent; thus, when they kick, it is likely that they are attempting to leave a scent trail that other dogs may detect and identify. Interdigital glands are not only utilized for marking but are also employed for warning purposes. 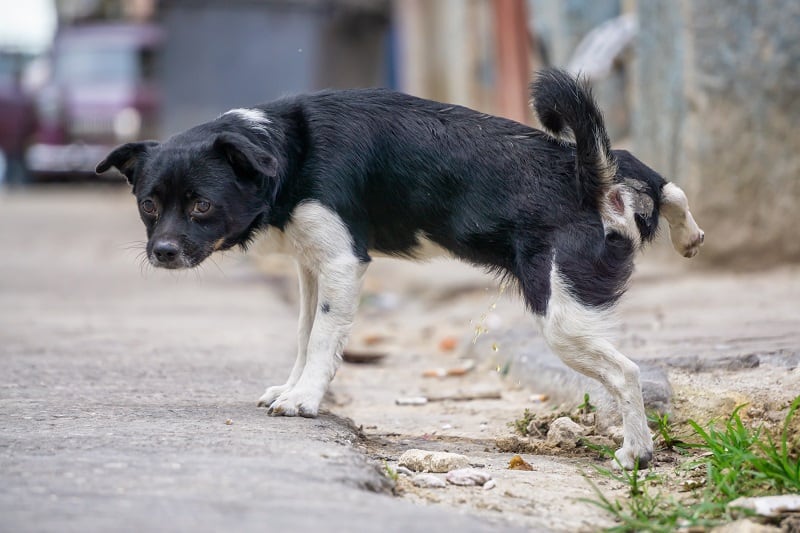 Perhaps this explains why agitated dogs tend to sweat from their paws in addition to the reasons stated above. Along with the sweat secretions, they may leave critical “alarm messages” that may alert other canines to the existence of a potential threat!

A Matter of Vision

Of course, canines rely heavily on their sense of smell, but their eyes are also quite vital! Due to this, there is a likelihood that when a dog kicks back with his rear legs, he is also attempting to leave some form of visual marking.

Such visual markings act similarly to an arrow, instructing other canines to follow the end of the line of scraped soil to locate the pee source. This damaged ground, combined with its aroma and the presence of urine discovered a short distance away, helps to emphasize the fact that “Rover was here.”

It is not always necessary for a dog to kick the dirt with his back legs as part of his elimination regimen. As with everything dog-related, there are no hard and fast rules because dogs are individuals with their own minor quirks in their behavior that must be respected. 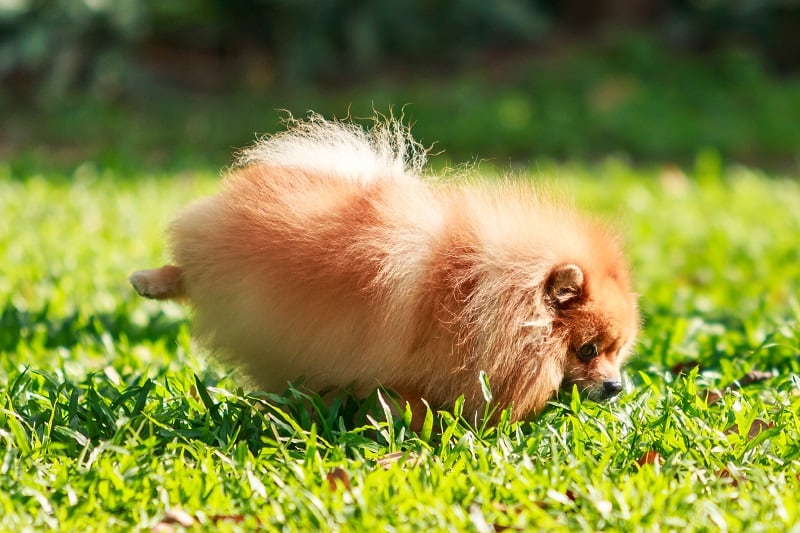 Because of this, owners have reported that their dogs may scratch up dirt when detecting scents left behind by other dogs or possibly another animal. When faced with this situation, one would ask if the dog’s kicking up dirt action is a way for him to mark over the scent, similar to how he would do with pee or feces.

A matter of higher surfaces

Dogs mark high objects, such as trees or wall corners, since the height helps the scent to travel farther through the air and then be exactly at the nose level for others to smell and identify the marking. Furthermore, height is a significant status signal in the dog world – the higher up you are on the hierarchy, the more critical or dominant you are.

Establishing authority over a vertical surface is one method of achieving this. In addition, if your dog can mark higher than other dogs, his message is less likely to be concealed by other dogs, and his urine marking is, therefore, more effective than other dogs. Male dogs have discovered that hiking their leg permits them to aim their urine higher into the air.

Even seen some female competitors perform a hand-stand-like maneuver in order to participate! A dog may mark up to 80 times an hour and always have urine on hand to designate that unique location as theirs, which is remarkable.

Dog urine’s chemical makeup will fluctuate depending on a variety of factors, including the dog’s emotional condition, his or her age, gender, health, and readiness for sexual activity. Canines will be able to smell if the prior dog was fearful, in heat, or even suffering from a sickness, just as they would if they were calling cards. 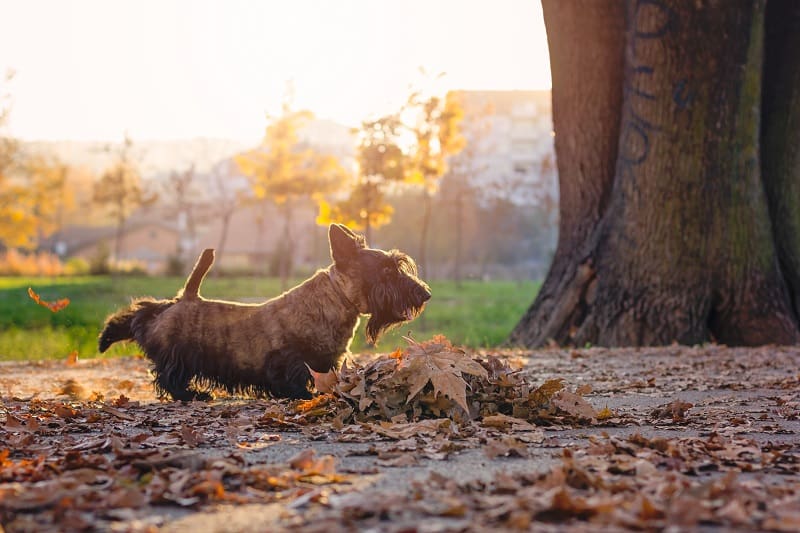 What about dogs who appear to kick their legs when they are excited?

Some dog owners have reported witnessing their dogs kick their hind legs in the same manner as bulls immediately before charging into battle. Dog owners often refer to this action as “the happy dance” because it frequently occurs when dogs are about to begin playing or when they are about to embark on a walking excursion.

Why did my dog scratch the ground after peeing?

If you own a dog or a puppy, you must be OK with the idea of smearing dirt and grass all over their face and body. It happens due to the dog’s propensity to kick the ground violently after he has peed. Ground scratching is the term used to describe this behavior.

Dog scratching behavior may seem like a peculiar and bothersome habit for some pet parents, but new research has found several interesting facts about the behavior. The main thing is that all canines do not scratch the ground. This behavior is only seen in stressed and anxious dogs and some other dogs with bad vices from a very young age.

According to research, both sexes are known to scratch the ground, but only approximately 10% of the population will refrain from engaging in this behavior. The ordinary course of events for a dog to show this scratching behavior is after emptying feces, but this usually happens more when the dog smells “familiar scents” or “smell unfamiliar excreta.” 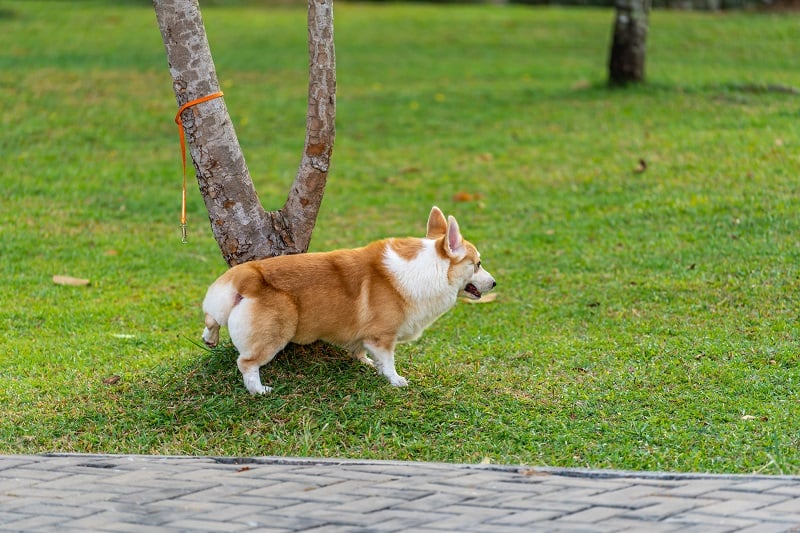 A scratching behavior not limited to canines

For example, when it comes to wolves, their social behavior of group living is associated with ground scratching behavior, which the herd’s leader wolves do to indicate their own territorial boundaries. A common tendency is to scratch the surface of the ground. A group of wolves may attack you on your path if they want to; the scratching signs may signal to other species members that they have entered an area of territory that they are not familiar with.

Scratching behavior is a form of marking shown by wolves and coyotes, and it has two distinct characteristics, same as dogs mentioned above, i.e., to leave a smell and show a visual sign.

Why do dogs kick after they pee? To communicate

The secretions secreted by the sweat glands of our canine companions contain pheromones, which are scent molecules. So, it is probable that a canine sends a powerful warning signal to other dogs that he is in his own area. It is challenging to determine what type of message can be transmitted to other species members because of the uncertainty surrounding the function of the pheromone generated by the sweat glands of the foot.

Dog have their own domain that they control and manage. It is their nature. Furthermore, it appears that this ground scratching behavior is not a method to alert/warn other canines to “go from this area,” but instead a way of informing that you are in someone else’s area. The dog’s scratching on the ground can be explained as follows: “When dogs become familiar with one another, they have no problem, but if they are not acquainted, they want the other dog to leave the spot in any condition.”” 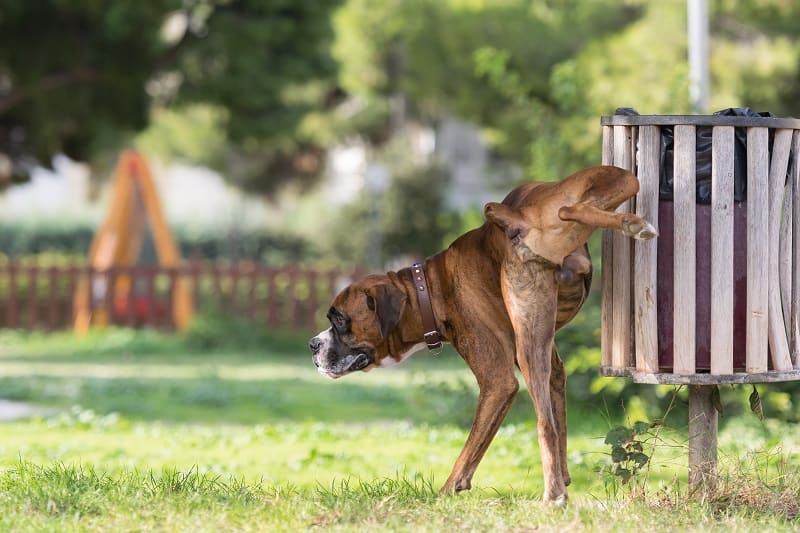 The scratching of the ground is more common in those canines that are worried and insecure than normal, well-trained dogs. However, it appears that not all furry friends who engage in this behavior are experiencing discomfort.

What about after pooping?

What is causing my dog to kick his hind legs when he is lying on the ground?

Dog kicks their hind legs while lying on the ground to show love and affection. Some of the canines respond to this by rolling over and exposing their stomach. It’s possible that your dog was dreaming about the scenario and was reenacting it while sleeping, which would explain this hind leg kicking behavior. 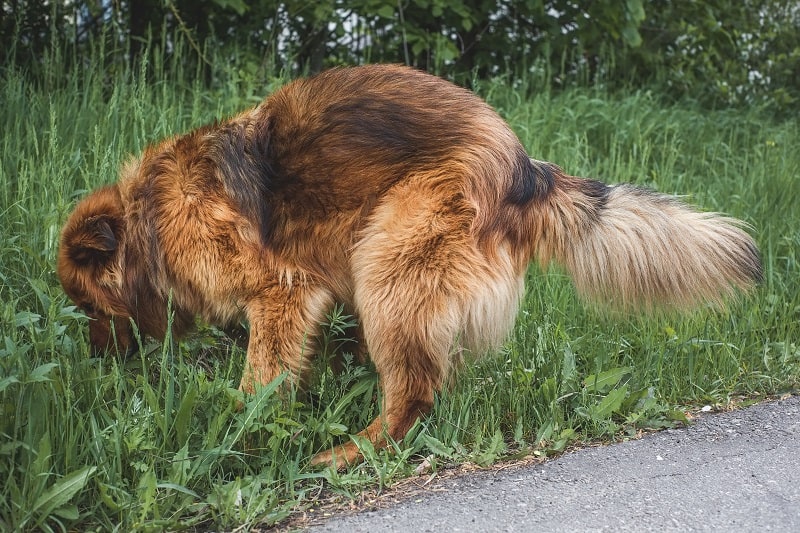 When I scratch my dog, he kicks his rear quarters like a bull. Why is this happening?

Your dog usually kicks its hind legs or rear quarters when they are rubbed or petted. Your dog is most likely enjoying the feeling, particularly if you’re petting him on its neck with your hand. Canines have their own distinct behavior of expressing themselves, which may involve scuffing their hindquarters.

Why do dogs kick after they pee: Final word

Next time your dog kicks his leg or spends a little too much time smelling that light pole, don’t be embarrassed or offended. Instead, laugh it off. Try to think of it as a personal advertisement that your dog is leaving for anyone who happens to pass by!