Your dog is constipated, it can happen, it can sometimes show some disturbances just like humans. The important thing is to know what to do when dogs are constipated.

What is less common is when this transit disorder affects their energy, decreases their appetite or even causes vomiting. So before you panic, it is better to know the causes of this disorder and, if the problem persists, make sure to treat it as soon as possible. Here is a guide to recognizing the symptoms and helping your dog best in this situation.

How to tell if there is no stool

If you walk your dog on the leash, and he only defecates when you are around, it is easy to detect the frequency. What is less obvious is when he has a large land available, with permission to relieve himself at leisure. We will therefore assume that you are not tracking it, in which case you may recognize constipation by the symptoms described below.

The warning signs are a lack of appetite which, coupled with abnormal fatigue, manifested by a lack of activity. If this condition persists and nothing stimulates him, not even the games he usually enjoys playing, it is because he is unwell. At this stage you must be vigilant, if possible, pay particular attention to his stool. 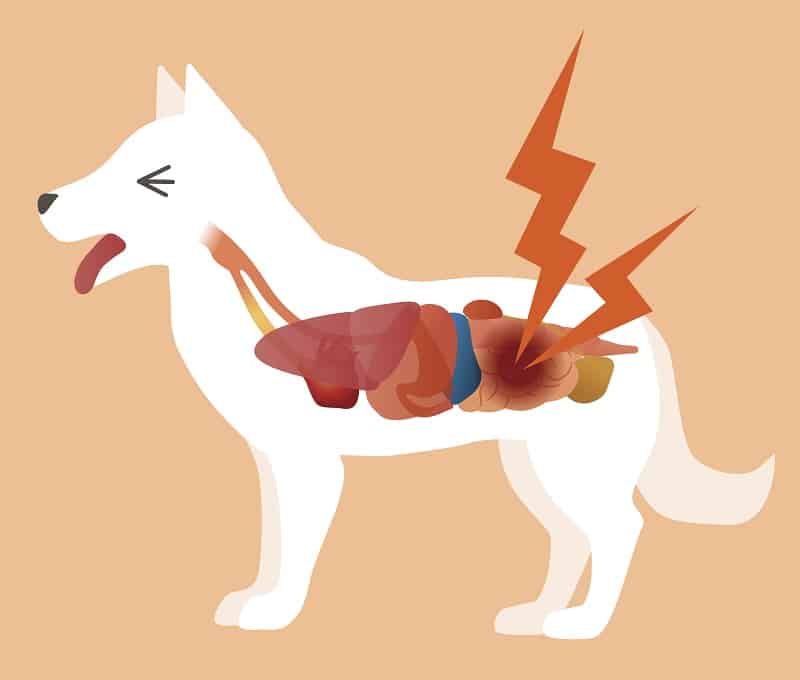 The clues that should alert you

A dog is expected to have bowel activity at least twice a day. When he is constipated it becomes problematic, he is unsuccessful or eliminates small, hard, dry faeces. Sometimes his attempts are painful and you may observe that your dog is pushing strangely or moaning.

Just as if he forces himself and searches for the place that seems most comfortable to him, this may be a sign of difficulty in relieving himself. At this stage, a constipated dog usually loses its appetite or even begins to vomit. Pay special attention to your dog and check his stools for blood content and if his stomach is unusually swollen. If you notice any of these symptoms, do not delay in seeing a veterinarian.

When age is the issue

As with any human being, your dog’s organs age over time and may develop certain symptoms. Their system is no longer as functional as before, the kidneys and the liver no longer perform their functions properly and the same goes with the intestinal functions. Prescribing laxatives is becoming common, as is a diet adapted to one’s pathology. Vegetables, combined with suitable kibble, can prevent your dog from needing to take too much medication, which is ideal. There are also kibbles specially designed for older dogs or dogs with sensitive stomachs.

When dogs are constipated: the right treatment

Even if the constipation is only transient, the best thing to do is to put your dog on a diet, while making sure to keep him well hydrated. You can also gently stroke his stomach as massaging the abdomen can stimulate the digestion and therefore help him better relieve himself. Another home remedy is to add a little olive oil to your dog’s food. But take into account that these are just homemade recipes that may not be enough in cases of severe constipation!

Your dog needs the right food for his needs, especially when he is old. Food fortified with psyllium seed husks is especially recommended when dogs are constipated. These swell in the dog’s stomach and help soften the stool, so that it is more easily excreted. If your dog often shows symptoms of constipation, even moderate ones, you can, as a preventive measure, gradually replace his current food with specially developed kibble to promote the digestive functions.

Address the lack of exercise

The more sedentary your dog is, the less stimulated his colon will be to facilitate the passage of food through his intestines. Increasing his physical activity can prevent clumping of food in the system. Walks with your dog don’t have to be particularly long, but try to go out with them at least three times a day, especially if they have digestive issues. These outings will make him exercise and also give him frequent opportunities to defecate. This can prevent your dog from being constipated, as having to hold back for too long can cause constipation. When your canine friend has lazy intestines and wants to go outside, allow him to go on demand!

Avoid recurrence at all costs by adopting new habits

Lack of exercise and inadequate nutrition can cause constipation in your dog. When your canine friend finally manages to relieve himself normally, and a veterinarian has ruled out any serious medical causes of constipation, adopt new habits to prevent a rapid recurrence of the disease.

Once all these precautions are taken, if your dog relapses, consult a veterinarian. By examining your dog closely, if necessary by performing a digital rectal examination, he will be in the best position to find suitable solutions.

When constipation leads to or after surgery

Who says surgical operation implies general anesthesia. The products injected to put your companion to sleep during the procedure are not in question. It is the inaction of the functions put to sleep which must resume their normal course. If you have had an operation before, you know that you will only be fed again if you have had gas. As for the exit, it is only considered if you have had a bowel movement. Well … it’s the same for your dog! 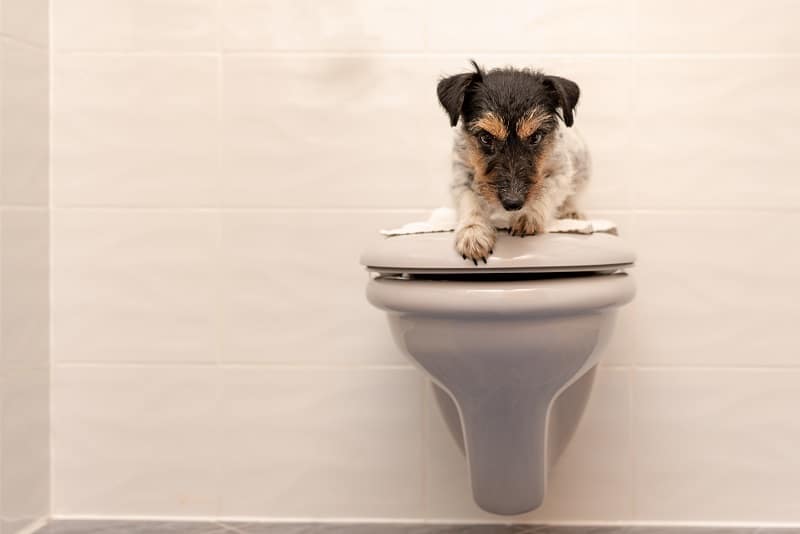 His bowels are in rest mode

Until your dog has pooped, he is not considered to be back on his feet. The emission of feces is a sign that its functions have resumed their role, a sine qua non condition for a good recovery. This phase can be more or less long but unlike humans, dogs are resistant to pain, so this should be quick.

When dogs are constipated: the most frequent causes

If your dog’s condition required surgery, it is because he has developed a condition that has led to severe constipation. This may be due to a disease such as cancer, kidney or liver failure, which usually affects older dogs. Before reaching this extreme point, your veterinarian may have prescribed treatment or even infusions, but this is not always sufficient.

If there is a cause and effect relationship that is beyond us, it is because dogs are sometimes “eaters of foreign objects”. If this is the case with your dog and his bowel is no longer working normally, it is possible that his bad habit has caused a bowel obstruction. This should alert you and lead you to act quickly: 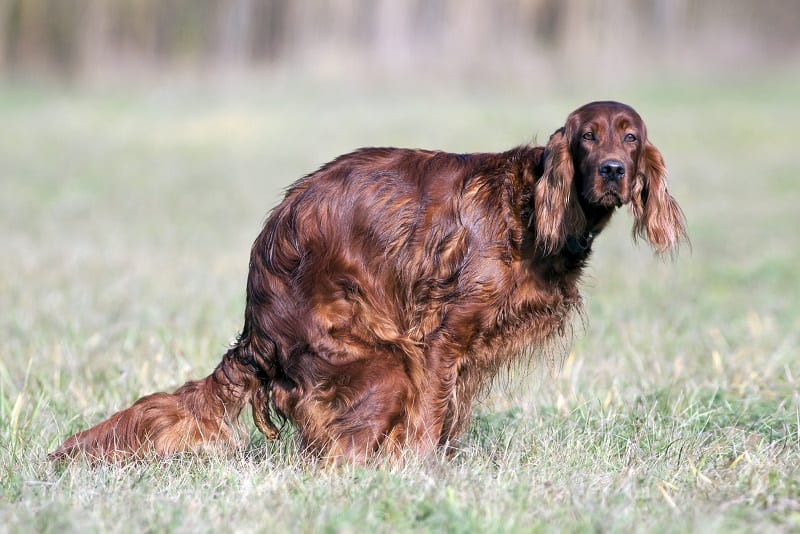 Other reasons to worry

When dogs are constipated because of underlying phenomena

Parathyroidism or hyperthyroidism can put your dog in endocrine conditions that are conducive to causing constipation. Tests exist to detect the level of follicle stimulating hormones (FSH) and they are very useful for measuring the effects on the body and providing a remedy.

However, constipation is sometimes of neurological origin, in which case the lesions disrupt the nerves which act on the movements of the intestines or quite simply linked to the presence of parasites. By examining your dog’s feces you can quickly find out! Treatment with a veterinarian is essential in this case. 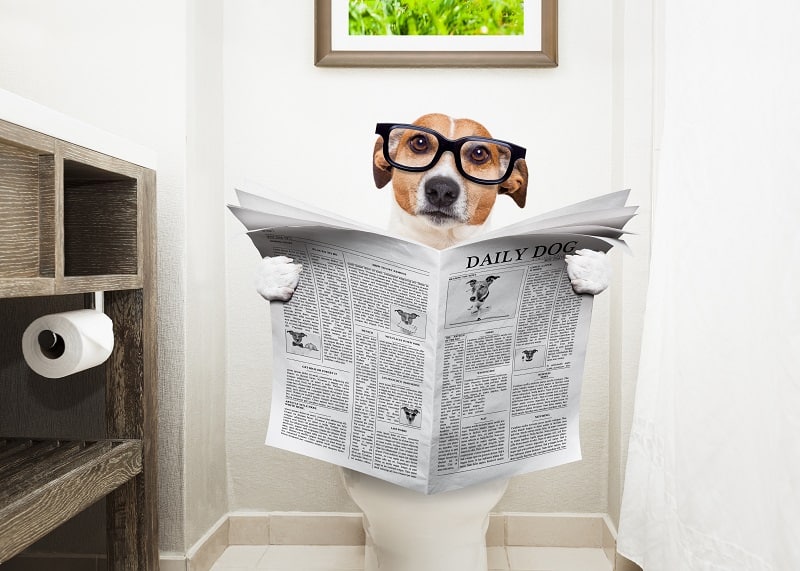 Stuffing or absorption of hair

Dogs with long coats are more often prone to constipation, this is because their feces can get blocked around the anus. Likewise, the dog may have absorbed hair, in which case hairballs form in the digestive tract. Regular brushing and haircut and a good shower can help.

Before proceeding with cutting long-haired dogs, moisten the tangled area well! The procedure is simple, but if this is a problem for you, take your dog to a groomer. The professional groomer can also take the opportunity to thin his coat.

How to approach care

The older your dog, the greater the risk of constipation. This is due to the fact that he is less active. Visits to the veterinarian will have to be more frequent and natural or medical remedies will probably be prescribed. If the constipation is serious, the dog will be given fluids intravenously to rehydrate the bowel. Poor posture due to joint pain can also prevent your dog from defecating normally. These can be relieved by treatments adapted to its morphology.

Even though constipation is one of the most uncomfortable problems, solutions exist for each specific condition. However, a healthy and balanced diet, implemented from an early age, consists in favoring premium food promoting healthy functions of the digestive system.