Vasculitis in dogs’ ears is an inflammatory response of the blood vessels in the skin. There is not always an obvious reason or cause behind this condition. Sometimes vasculitis of the dogs’ ears is caused by an adverse response to a drug or vaccination. Other times it is due to a tick-borne disease like Lyme and Ehrlichia, or just an autoimmune reaction to an unknown situation.

Types of Vasculitis in Dogs’ Ears

Vasculitis can be classified as infectious or non-infectious. 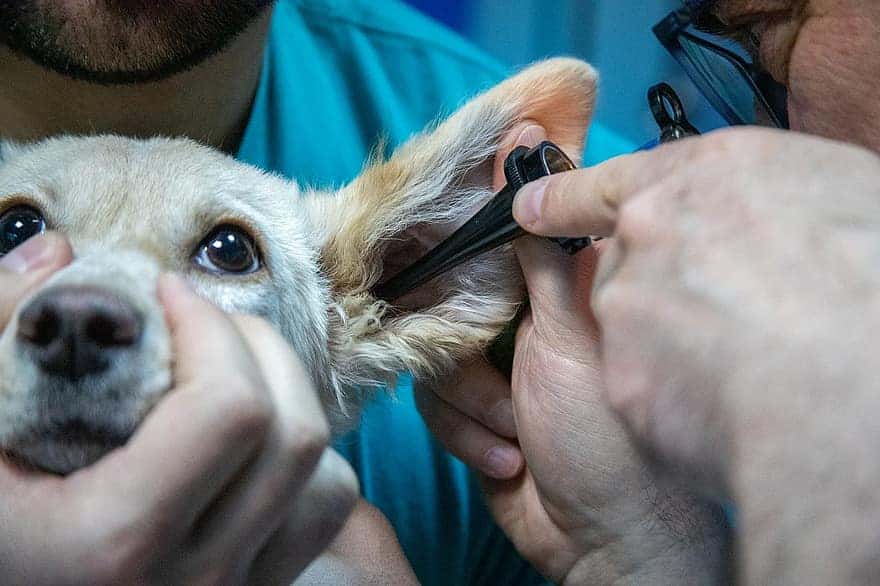 Symptoms of Vasculitis of The Dogs’ Ears

Vasculitis in dogs’ ears is also called pinnal vasculitis and is more commonly seen on the ear pinna, which is the flap of the ear. It can also be seen on the paw pads and other parts of the body such as the nose and tail, and on rare occasions internally.

Typically, the lesions are wedge-shaped and crusty, starting at the tip of the pinna and working its way down the ear.

This list of pinnal vasculitis symptoms is not exhaustive but reflects commonly observed conditions:

On occasion, symptoms of the autoimmune disease, Lupus Erythematosus, can be seen as well with vasculitis.

Some forms of vasculitis, like the proliferative thrombovascular necrosis type, can actually cause the tissue on the pinna to die, starting at the ear tips. Usually, this is due to a blood clot or decreased blood flow to the vessels in the ears. 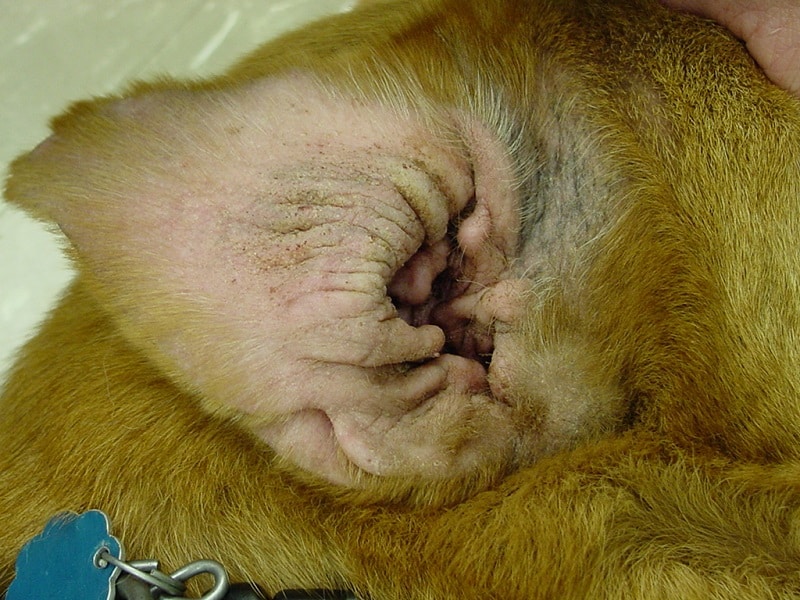 What Causes Vasculitis In Dogs’ Ears?

This disease is one that has been tricky for pathologists and other specialists to pinpoint a direct cause in canines. There have been some studies in human medicine that have actually helped the veterinary side with respect to testing that can be done for vasculitis.

Typically, the cause will be unknown unless the symptoms coincide with the start of a new drug or vaccination. An idiopathic diagnosis is not uncommon in many vasculitis cases.

Science has also shown that there can be a few other potential reasons such as:

Which Dogs Are More Affected by Vasculitis of The Ear?

Vasculitis does not seem to affect any particular breed or age but can be seen more frequently in German Shepherds, Rottweilers and some terrier breeds. Age and gender also do not seem to play a role in who is affected by this condition.

German Shepherds are one of the breeds that can develop vasculitis lesions on the paws as well as the ears and tail. This usually happens when they are very young and undergoing their puppy vaccinations. It would be wise to discontinue vaccinating the dog until the vasculitis is well controlled.

Pinnal vasculitis with tissue necrosis can be seen in dogs that have had their ears cropped. They will be susceptible to painful and exudative ear lesions along the outer edge. This is due to the nature of their pinna cartilage, causing an inflammatory response. This usually affects dogs like Boxers, Schnauzers and Doberman Pinschers, early in their life. 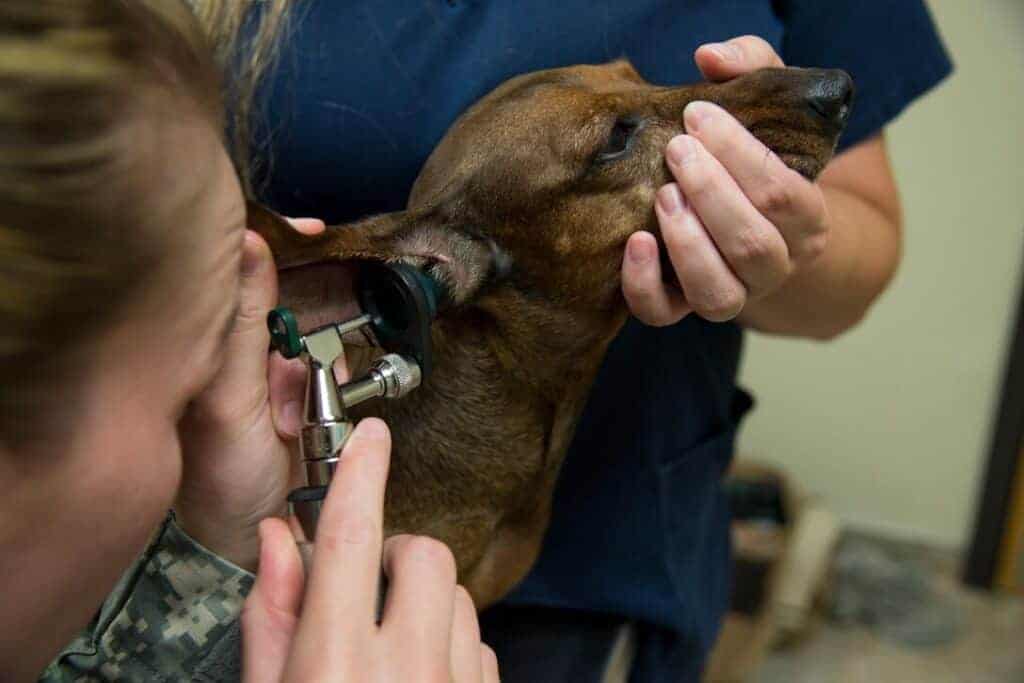 How Do We Diagnose Vasculitis of The Dogs’ Ear?

A veterinarian can offer professional advice on how to appropriately diagnose this condition in your dog. If he is showing clinical symptoms, then it would be important to pursue any recommended testing.

Most of the time, there are obvious symptoms seen during the veterinarian’s physical exam, such as lesions on the ear pinna. If your dog does show any clear signs, then further examination will be necessary to truly diagnose the condition.

Samples to the lab

Even if it may seem obvious, your vet may still insist on sending a tissue biopsy to the lab for confirmatory diagnostic purposes. It would be pertinent for them to send in a healthy sample of tissue along with the affected tissue for comparison.

It would be more responsible to have a true definitive diagnosis with a tissue biopsy reviewed by a dermatopathologist, to rule out the potential for other similar-looking diseases.

When dealing with vasculitis in dogs’ ears, either of the ear pinna or any other affected part of the body, it is important to note that running blood tests is also a crucial step in screening your dog’s condition. In some cases, vasculitis can affect other parts of the body, such as the liver and kidney functions. 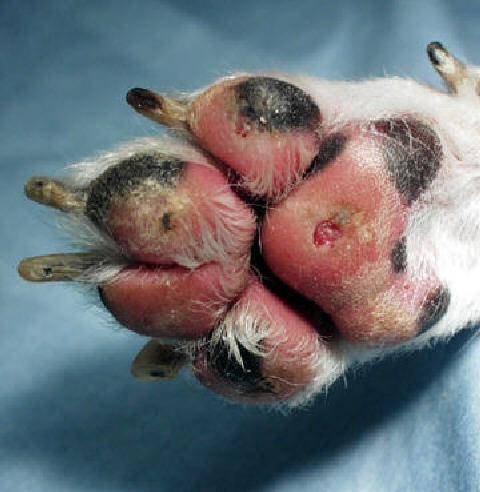 How Do I Treat My Dog’s Vasculitis?

Once there is a confirmed diagnosis of pinnal vasculitis either through biopsy or a physical exam, treatment can be established.

Treatment If Caused By A Rickettsial Disease

If it is determined that the cause is a Rickettsial disease, such as Lyme, Ehrlichia and Anaplasma, then treating it with doxycycline or other similar medication will be ideal. Keeping them on a good flea and tick prevention program is also key to stay away from any other inflammatory responses to a tick bite.

Treatment If Caused By A Vaccination Or Drug

When the cause of pinnal vasculitis is a vaccination-related issue, then avoiding the suspected vaccine is the first place to start. While having your dog vaccinated is very important, sometimes their physiology can’t handle it.

Rabies vaccines have been known to cause vasculitis in dogs. Usually, symptoms of alopecia are the first observed, occasionally followed by scaly or crusty lesions and scarring of the injection site and pinna.

Titers can always be performed in cases of vaccine sensitivities. The other option is to wait until the vasculitis is well controlled.

In other instances, it is important to eliminate any suspected drugs or supplements that the dog could be reacting to. Discontinuing all oral medications is necessary to rule out which one could be the cause.

Again, identifying the underlying issue is the first step in treatment for vasculitis of the ears. If neoplasia was found to be the cause, then treatment of the cancer is clearly the priority. Hopefully, after removal of the maligned areas and some minor drug therapy, the dog’s quality of life will greatly improve.

As mentioned above, every patient’s treatment depends on the confirmed or suspected underlying cause and diagnosis. In many cases, treating with a glucocorticoid or other immunosuppressive or immunomodulating drug will be beneficial in treating the symptoms and giving the dog comfort.

A commonly used glucocorticoid for pinnal vasculitis is called Synotic, which is a veterinary-specific drug. It usually works very well to control the inflammatory lesions, specifically on the ear.

If this doesn’t provide the desired results then adding a stronger oral steroid may be necessary. Unfortunately, oral steroids come with a lot more side effects than the topical application of Synotic.

Several dermatologists agree that starting with Pentoxifylline instead of jumping immediately to steroids is a good strategy when treating pinnal vasculitis. This drug is an immunomodulator that works by reducing the body’s reactivity to leukocytes.

Using Pentoxifylline in conjunction with a topical cyclosporine derivative drug, called Tacrolimus, is also quite effective in minimizing symptoms and discomfort arising from .

If no relief is seen with this drug protocol then it is standard to go to prednisone or other steroid use. This is not as ideal, as chronic steroid use comes with its own list of potential future problems.

There is a supplement called Niacinamide that works in more mild cases of vasculitis that affects the ear pinna, the nose and feet. It helps to reduce some inflammatory responses associated with conditions of a suppressed immune system.

Niacinamide does have some minor side effects of vomiting, diarrhea and lethargy. Discontinue if these are noted.

Life-long management for some dogs

Unfortunately for some dogs, pinnal or other forms of vasculitis, is a life-long condition, especially if it is found to be caused by an autoimmune disease. Chronic vasculitis is usually treated as it flares up with steroids, assuming it isn’t well maintained with something topical.

Diagnosing the cause of the vasculitis is crucial in dictating an appropriate treatment.

Like many dermatologic issues, patience is key with respect to a Vasculitis In Dogs’ Ears. It can sometimes take several months to minimize or eliminate the nasty symptoms.