What is the best food for a French Bulldog? Where can you find it, and how does your current dog food match up?

The Best Food for a French Bulldog

Rather than ask yourself about any particular breed, what should the average dog eat? Just like humans all have the same basic nutritional requirements, so do dogs. Your French Bulldog is going to need the same basic nutrients as a Beagle or Great Dane (if perhaps less of them).

Dogs are scientifically classified as carnivores, looking from a taxonomy perspective. In reality, they might be closer to omnivores and can consume from both plant and animal sources.

That being said, today’s domestic dogs evolved from an animal that found most nutrition from animal sources. 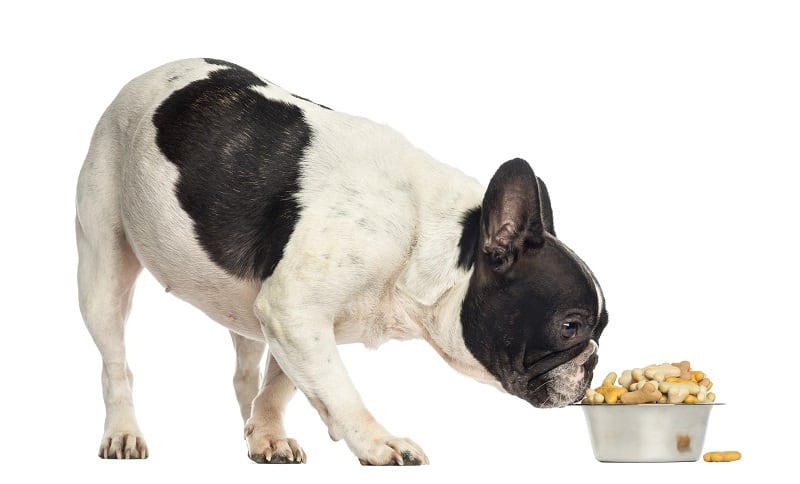 Now you’ll have to look at the number of calories you’re feeding your dog! All dog breeds will need the same basic types of nutrients, but the amount of those nutrients will depend on your dog’s lifestyle.

A healthy adult male French Bulldog will usually weigh between 20-28 lbs (9-12 kg), while a female will weigh 4 pounds less on average. Anything over 28 pounds is considered overweight and will disqualify a competing Frenchie, according to the American Kennel Club.

These certainly aren’t high energy dogs! In fact, the breed is considered low to moderate energy. This means your Frenchie probably won’t be burning tons of calories running all over the place.

How old is your French Bulldog? As a dog ages, its metabolism will begin to slow down. He won’t be as active as a younger dog, which means he won’t be burning as many calories. 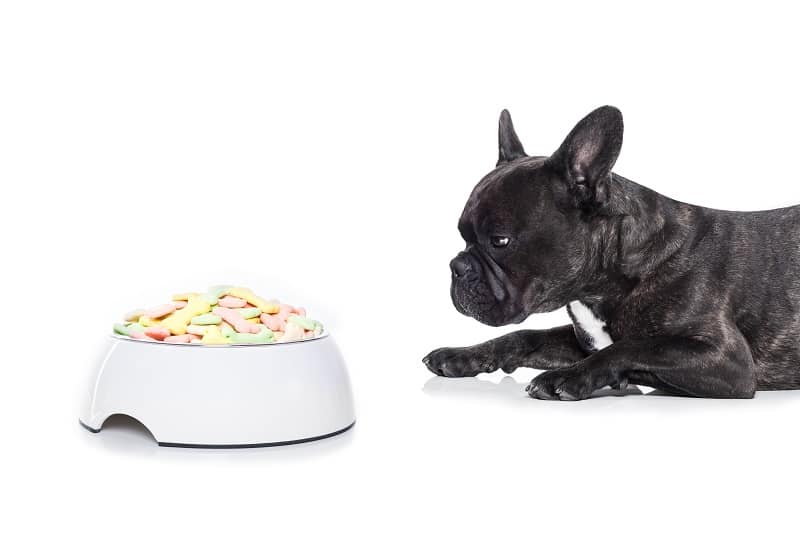 The same amount of calories he consumed as a younger dog could cause weight gain now. Excess weight could add pressure on any arthritic joints your dog might have, in addition to causing a host of other problems.

On Average, French Bulldogs will need about 25-30 calories per pound of body weight per day.

Remember, this will change slightly depending on your Frenchie’s activity level and age! 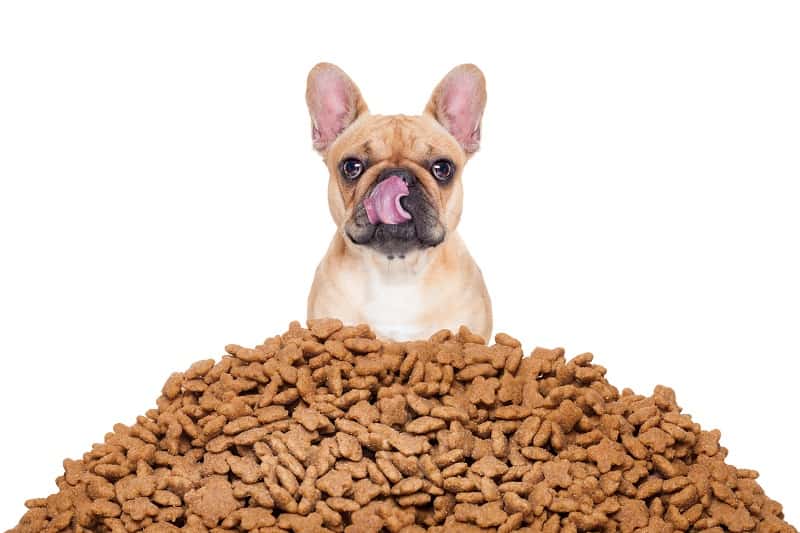 Here we’ll list the top 15 ingredients in one of the absolute best-manufactured dog foods available on the market today. Ingredients are listed in order of amounts, so anything beyond these won’t make a significant percentage.

The top 3 Ingredients are Meat Sources

Many cheaper manufacturers will fill their foods with mainly plant products. Plants are cheaper to grow, despite animal sources being preferred. It’s also harder to find the correct essential amino acids in plants.

Not only are eggs protein-rich, but they are also packed with a wealth of vitamins and minerals! Many dog foods already contain eggs. You’ll find two separate sources above. 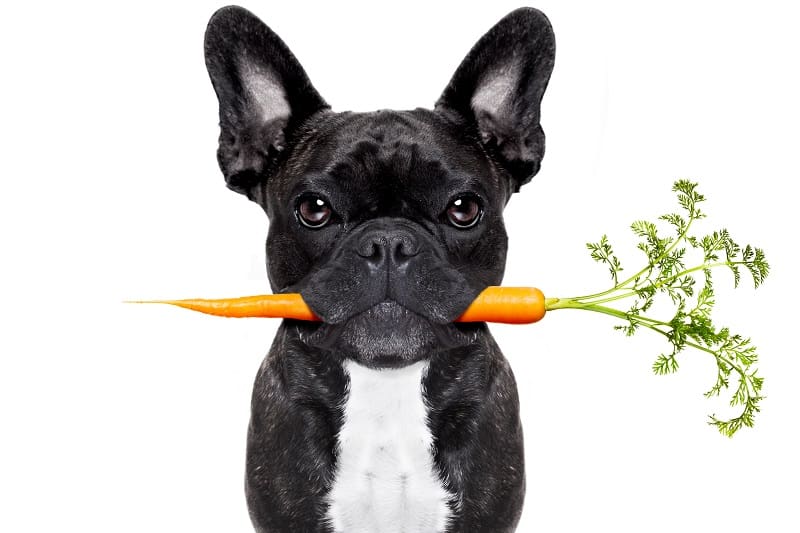 Fruits, veggies and grains certainly aren’t the most important part of a dog’s diet, but they offer nutrients meat doesn’t. Even wild wolves will scavenge for plant sources occasionally. You should never stick with animal meat alone.

However, they are listed further down the ingredient tree. Vegetables need to be there because they are important, but not as important as the animal sources listed above them.

Though meat is very valuable as a source of nutrition for our dogs, vegetables, fruits and even grains offer valuable nutrients also. Great dog food should include all four!

How Often Should a French Bulldog Eat?

You shouldn’t be caring for a puppy younger than eight weeks (unless you are the breeder), so let’s start there. A young puppy should be fed three meals a day, according to your dog food nutritional labelling.

Too many human foods, in general, aren’t good for any dog! They are often too high in carbohydrates and sodium. The foods listed below can be especially dangerous, and should absolutely never be fed to your dog.

Raw diets have become a huge craze in recent years! The basic idea is that nutrients are lost during cooking. If raw meats are fine for wolves, why not dogs?

Our dogs aren’t wolves and didn’t inherit many of the bacterial resistances from their mothers that wild animals do. No dog is immune to intestinal parasites, and you would be risking exposure with raw meats.

The small amount of nutritional quality lost during the rendering process doesn’t warrant the risk you would be taking here! The best food for a French Bulldog, or any other breed, should be cooked.