Growling German shepherds do nothing other than express themselves and this is not a negative behavior, on the contrary. Humans very often equate growling with outright aggression. Now, let’s see it from the dog’s point of view. How can he express fear or anxiety? He’ll bark, cry, growl, bark and do a whole bunch of facial expressions to get you across. Grunting is an integral part of the dog’s communication kit.

What does the growl mean? What are the causes?

The meaning of the growl can vary widely. Indeed, German shepherds will use the growl in different ways and at different times depending on who they are and how they express themselves and communicate. In general, we can say that growling signals 3 situations the dog may be experiencing fear, pain and defense. 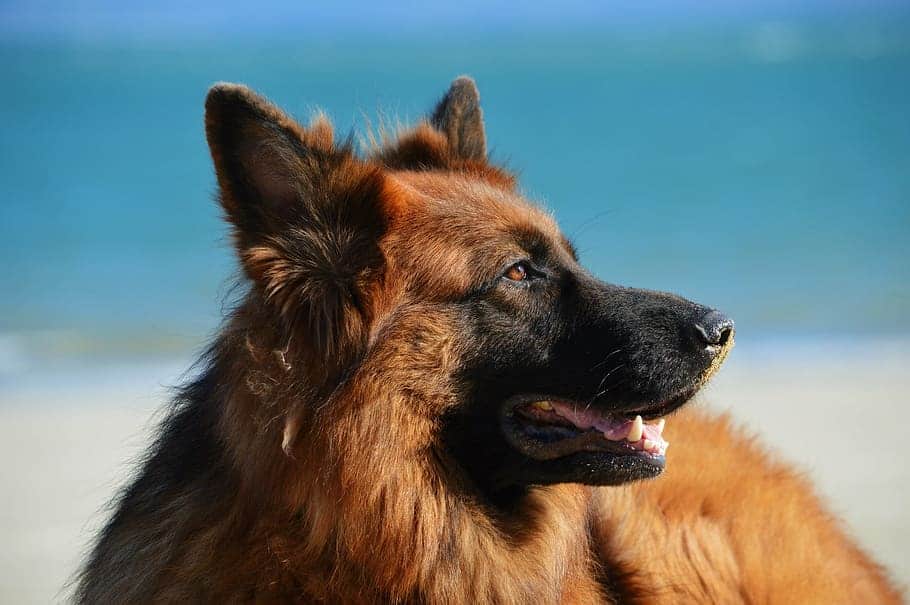 Growling German shepherds that have no reason

Good news, there is no such thing (unless the dog has a neurological problem, for example, but it is very rare and there are other signs). If your German shepherd is growling, stop whatever you are doing and figure out WHY. This is the only way you can fix the problem. What were you doing? What was he doing? In which place? Close to what/who?

German shepherds that growl when scolded

I am one of those who will tell you that an “aggressive reaction leads to an aggressive response.” If you are pushed into the street, you have 2 options. Say nothing and leave with lowered head: inhibit yourself. Or say something calmly, shouting, pushing the other, fighting. It all depends on who you are.

Tell yourself that it’s the same for your dog. If you scold him, and even worse if you use punitive methods such as training whip, rolled newspaper or even spanking, taking by the skin of the neck, howling, etc. you are actually assaulting your dog. He saw it like that. 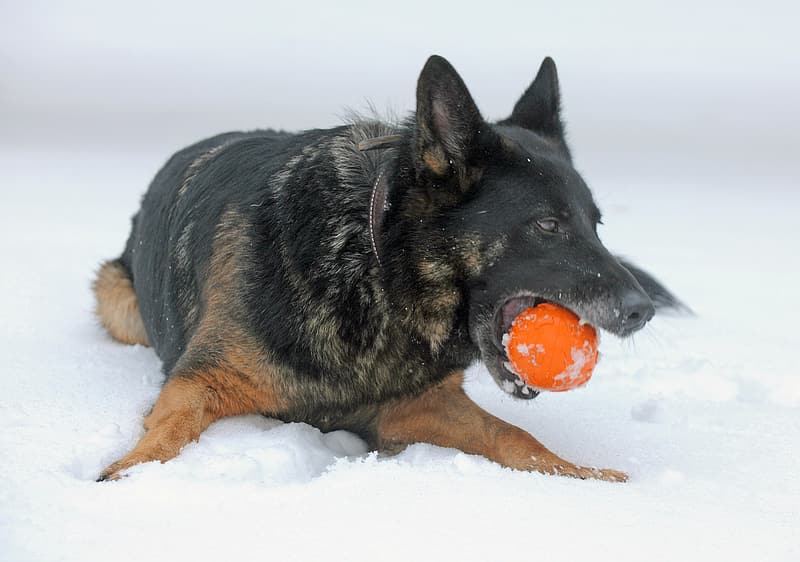 It starts with a growl! He warns you that he is afraid or in pain or that he will defend himself. This is the start of a phase of aggression, but it is only a message. Your dog doesn’t want to bite you, he wants you to stop assaulting him! You are doing it wrong with him, the relationship of trust is breaking down and he does not understand you. You need to reconsider the way you reprimand and reward him!

The dog that growls at people

Growling German shepherds may be afraid or suspicious of people. This can come from a lack of familiarization with all human morpho-types (man, woman, child, tall, short, fat, white, black, with hood, on a bicycle, on a scooter etc.) or from a bad experience. For example, if your dog has been abused or has had a traumatic experience, he may be afraid of people who fit that morphotype or go so far as to generalize to all unknown humans.

In such a situation, a dog needs to gradually get familiar with humans without ever forcing the process. The dog will come forward when he is ready. If you force him, he will be even more reluctant and will go into a state of panic. 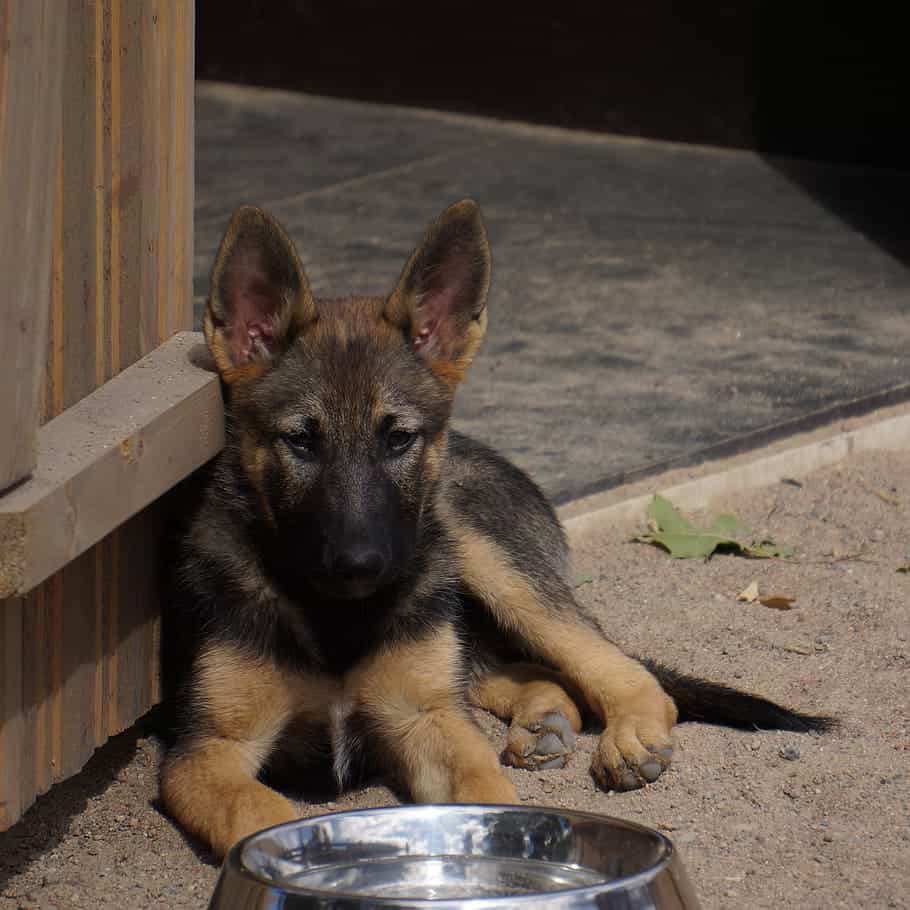 The German shepherd who growls at his master or family members

If your dog growls at you, or at a family member, he may be doing resource protection. It is then interesting to watch the event and analyze it. Who, what, where, when, how and what, in order to determine WHY the dog is growling. This helps to act on the cause. Check that this is not one of the reasons mentioned above.

Growling German shepherds may not be comfortable getting a hug or other form of physical contact. Indeed, some dogs are not tactile so they do not appreciate the petting and cuddling that we humans love. If your dog is not inclined to come asking for petting and contact, he may simply not like it.

When you pet him, does he turn his head away from you? Is he moving away? Also check that it is not painful. I am thinking in particular of old dogs with osteoarthritis. It is not visible but our caresses can cause pain.

Finally, a dog does not like to be restrained in the arms of humans. He also doesn’t like people bending over him, better squat down. These two things make your dog more uncomfortable. If you have children, it is up to you to manage how kids interact with your dog and ensure your children respect his living space. 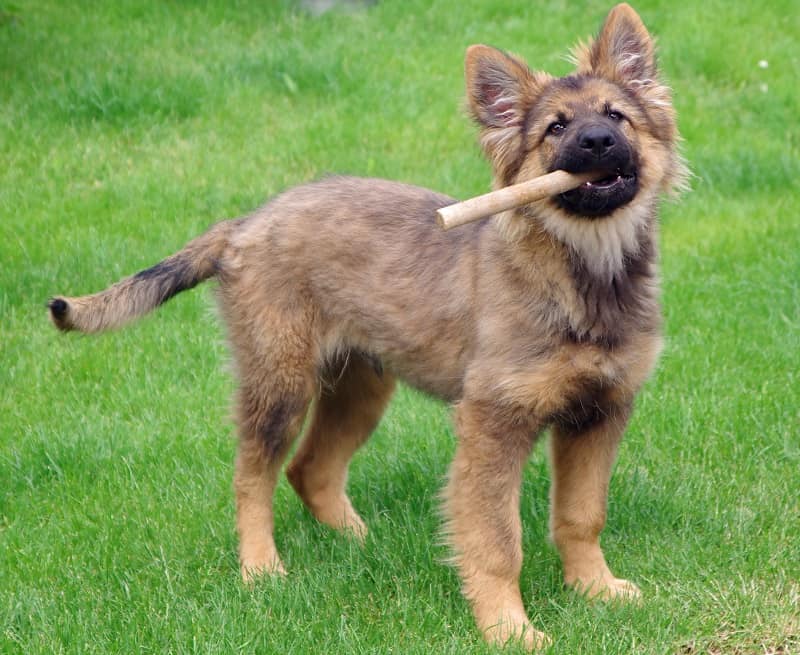 This is a great classic when you get close to your dog and his bowl while he is eating. This can happen with a puppy as well as an adopted adult German shepherd. Where does it come from? In puppies, this may be due to having had a single bowl for the whole litter. This set up food competition and pushing the dog to eat fast in order to have as much food as possible.

In adopted adult dogs, they may not always have had enough to eat and this creates a resource protection reaction. Clearly, he protects his food because he is afraid of running out of it.

In these cases, teach your dog that you are there to give and not to take. So, do not put your hand in the bowl and do not take it away from the dog. This creates the opposite effect of what is wanted. On the contrary, give him something extra when you pass by!

It’s also important to feed him in a quiet place out of the way. Remove the bowl only when it is empty and your dog has walked away. 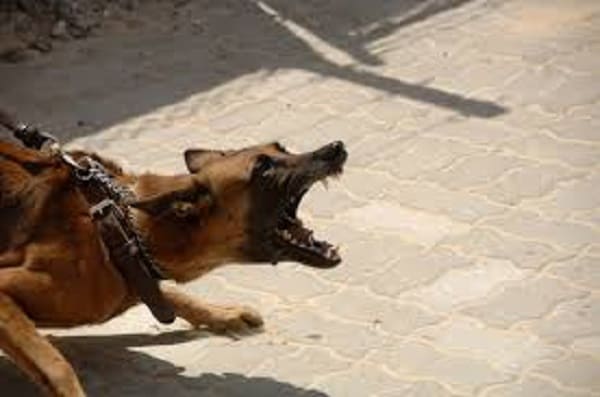 The dog who growls when he plays

Growling German shepherds may not like the fact that you take his toy away while playing. In this case, he is afraid of losing it and again here, he is trying to protect his belongings. Don’t mess around with such situation, there is no need to work on the “give” or “leave” until the relationship of trust is established.

Once the trust is in place, you can play take a toy and give it back immediately and your dog will likely forget the sense that you are going to take it without giving it back.

There is another growl, the dog can growl while playing. When excited, he may growl to show his desire to play over and over again. No worries, this is perfectly normal and in no way a threat or a sign of discomfort!

Should I be concerned if my German shepherd is growling?

I would say “not necessarily”, however, you have to better understand the cause! Try to understand what is going on, especially if the growl is sudden. If you don’t get it, don’t get angry and panic. Call on a canine expert to explain the reason for the behavior and how to resolve it.

Growling German shepherds communicate their discomfort in all kinds of ways. When it comes to the growl, yes, this is the beginning of an aggressive phase. There are different stages before it comes to an actual assault. 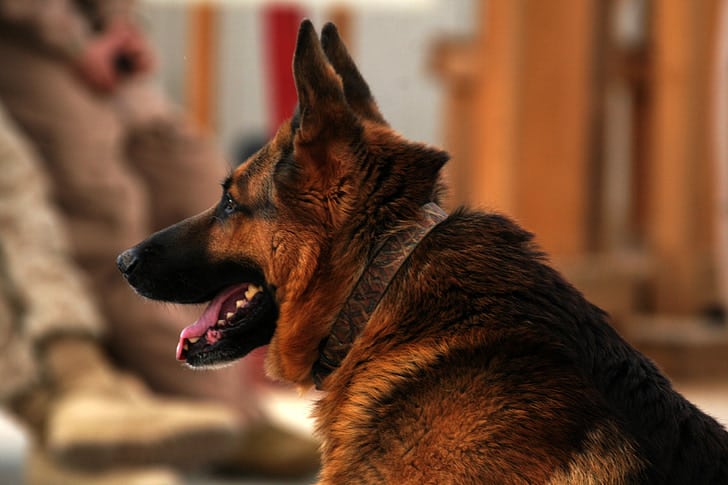 Know that the next phase may become worse if the dog feels misunderstood, not respected, in danger, etc. Ask yourself what stage he is at. The growl is nothing more than a warning, a threat and it should not be underestimated, but it should not be feared either.

How to stop your dog from growling?

You will no doubt understand, the answer is clearly to find the cause! Tell yourself that to prevent aggression from escalating you must:

What if two dogs growl at each other?

To this point, we have mainly covered the interaction between growling German shepherds and humans. It obviously also exists between dogs and it is much more effective because they speak the same language. If your dog growls at or is growled at another dog, do not intervene. Humans only scramble canine communication when they intervene and in fact make matters worse.

Don’t do anything, don’t ask him to stop, don’t touch him (that will make him stronger), walk away. Your dog will follow you. If your dog has a tendency to growl, use a lanyard. Try to understand what type of dog he is growling at: male, female, neutered/sterilized or not, tied up or released, in what type of places.

If it’s your dog who is being growled at, he must understand that he has to go. Your dog and yourself must understand that a growling dog is asking for space. This is especially important with a puppy. If you have an adult dog who does not respect the communication signals of other dogs, it may be necessary to consult with an expert to understand and manage such situation. The safety of your dog is at stake!