In this article, we will discuss how to use a dog whistle, particularly the ultrasonic model, as it is becoming particularly popular in the market today.

Ultrasonic whistles emit sounds, perceptible only by dogs (and cats!), cover a distance of up to several kilometers. It provides certainty for dog owners to be heard by their canine friend, particularly when he is outside.

How do ultrasonic dog whistles work? How to use them and are they really effective?

This article answers all the questions you ask about these accessories so popular with dog trainers!

What is an ultrasonic dog whistle?

Also called Galton’s whistle, named after Sir Francis Galton who first described it, the ultrasonic whistle emits whistles whose frequency is not picked up by the human ear. 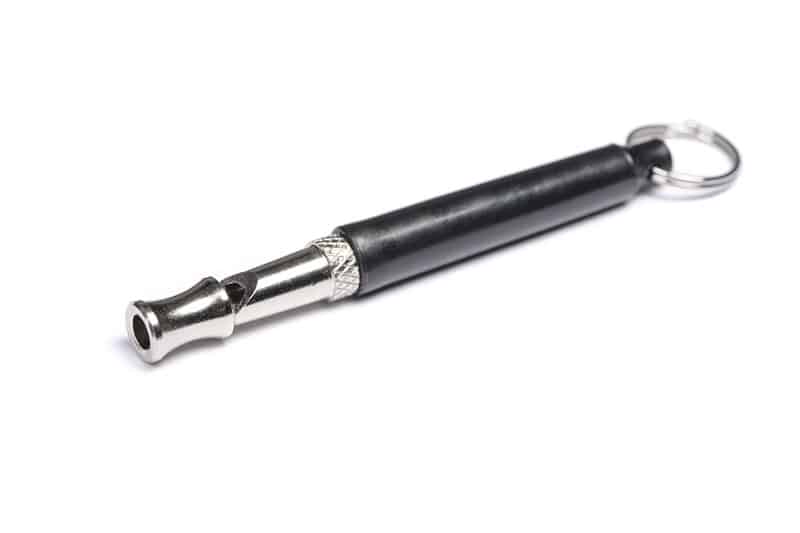 Initially used to test the limits of human hearing, the ultrasonic whistle was subsequently challenged with animal hearing, which led Sir Galton to find that dogs managed to perceive hissing sounds inaudible to humans.

Now, ultrasound whistles are commonly used in the field of animal training, and more particularly canine!

There are a large number of models, some allowing you to modulate the whistles to produce distinct sounds which may correspond to different orders.

How to use a dog whistle?

The ultrasonic whistle works in the same way as a classic whistle, the handler just needs to blow into it to produce a sound that only dogs will be able to hear.

The frequency of the sounds produced by these accessories, measured in Hertz (Hz), blithely exceeds 20,000 Hz, the maximum perceived by a human child.

With age, human perception of high-pitched sounds decreases to no longer exceed 16,000 Hz after 30 years. 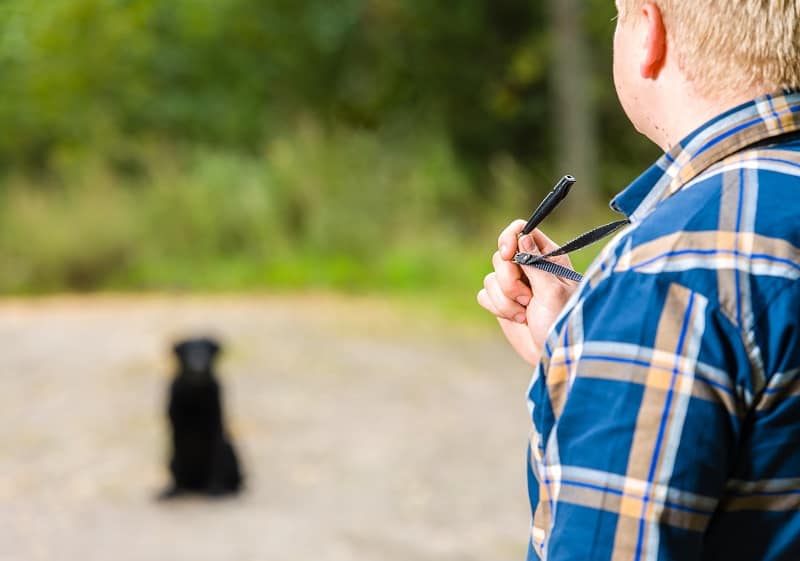 We are therefore very far from the acuity of canine hearing, capable of hearing sounds with a sound frequency of up to 44,000 Hz!

For the record, experts assume that this hearing ability is directly related to the primitive nature of dogs, which are thus able to hear the high-pitched squeals of smaller prey.

The whistles emitted by the ultrasonic whistles are in a frequency generally ranging from 12,000Hz to 58,000Hz, depending on the quality of the product and the breath of the user.

Inaudible to the user, the sound produced is however very well perceived by the dog who is particularly sensitive to high-pitched sounds!

Why use an ultrasonic whistle?

The ultrasonic whistle has the invaluable advantage of producing a constant sound, regardless of the environment in which it is emitted or the emotional state of the user.

The sound perceived by the dog is therefore easily identifiable and leaves no room for misunderstanding. If your doggie does not run, it is certainly because he prefers to turn a deaf ear and not because he did not understand or heard the order!

The sound emitted by this whistle also has the advantage of being easily recognizable by the dog, because it is outside the frequencies usually emitted by humans. 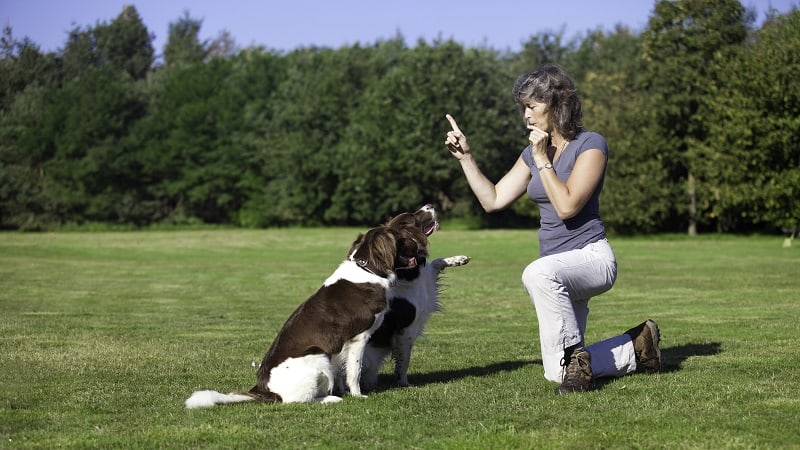 Also, in a particularly noisy environment (crowd, urban environment, etc.), it guarantees you will be perfectly heard and understood by your canine friend.

Thanks to these characteristics, the ultrasonic whistle is formidably effective in educating our dog friends and bringing out their full potential!

It also fits perfectly in a positive education process, because it does not require the dog owner to raise the tone to try to be obeyed when the dog runs too far away.

The use of the whistle promotes stability with the dog as the master can maintain great consistency in his education and make himself understood more quickly by his companion.

As mentioned earlier, ultrasonic whistles are completely inaudible to humans and allow you to educate your dog without disturbing your neighbors.

How to use a dog whistle for different commands

The ultrasonic whistle can be used in a variety of situations, although it is most widely used in training dogs to recall.

The range of whistles emitted (up to 3 kilometers depending on the wind and terrain) allows the master to be heard by his companion even when he is at a good distance.

This characteristic is particularly interesting in the case of lost dogs. Guided by the high-pitched sound of the whistle, they may be able to find their way back much more easily. 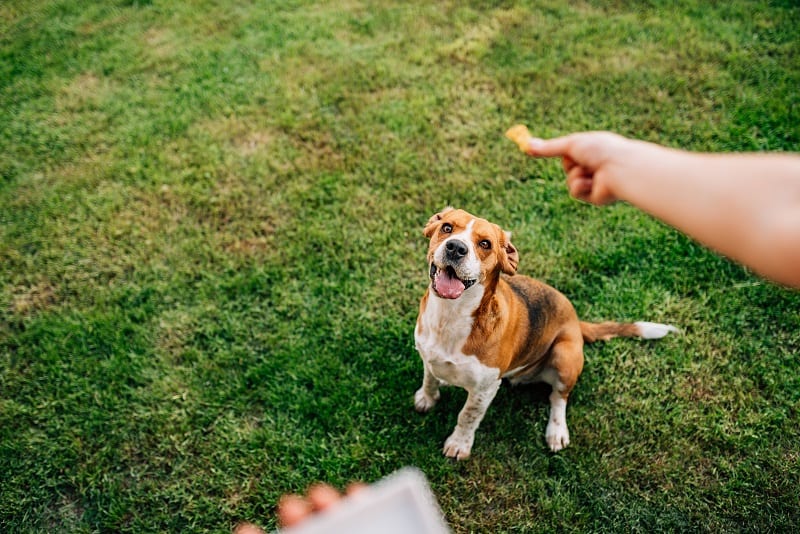 The sound frequency emitted by Galton’s whistle also stands out from ambient sounds, allowing your dog to hear you even in a noisy environment.

If the ultrasonic whistle is often used to work on recall, it is quite simply because it is an essential command in the education of your canine companion.

Once the recall is perfectly mastered, with or without the whistle, it is possible to teach your dog friemd other more advanced commands with the ultrasound whistle.

The Galton’s whistle can be particularly useful for the owner to calm the dog down when he is a little too enthusiastic!

The ultrasonic whistle to repel dogs

The high frequency sound of the ultrasonic whistle is often perceived as unpleasant for the dog until there are positive signals associated with it.

Also, it is extremely effective in warding off unwanted dogs that would take your garden for their playground!

Therefore, it is important to work with your dog on the commands given using the ultrasonic whistle in a closed place so as not to frighten him while he gets used to this strange noise.

Remember to give your dog plenty of praise when you achieve the desired result so that he quickly perceives the shrill sound of the whistle as a one that announces some form of reward such as a treat or congratulations. 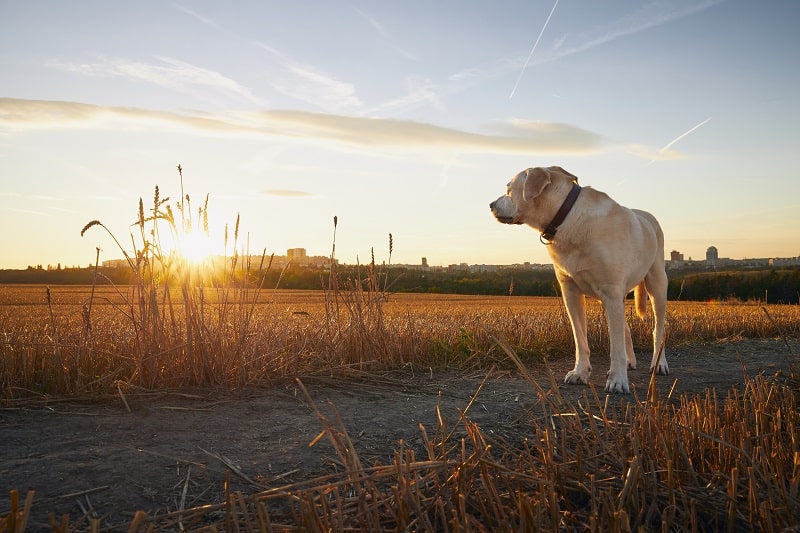 Ultrasonic whistles are also widely used to train dogs that are a little too vocal! In this case, the high frequency sound is used as a “punishment” for the unpleasant barking.

Of course, the sound used in this case cannot then be used for the recall or any other order associated with a positive action.

Be careful, however, not to use ultrasound indiscriminately. Dogs generally react much better to positive education, that is to say based on the reward for their good behavior rather than on a sanction for their mistakes!

There are many models of ultrasonic whistles, which makes the choice particularly complex for such a simplistic tool! I recommend that you opt for whistles with adjustable tones, especially if you plan to teach several different commands to your canine friend, such as recall, calm down, sit, etc.).

In addition, it will allow you to test different frequencies to determine which one your dog is most receptive to!
Learning how to use a dog whistle can very beneficial to both the dog and the owner and is almost an essential element of a dog training process.