This article will teach you how to train a pug puppy not to bite and jump. First don’t panic, you have a normal and healthy puppy! You might as well put it into perspective! However, these behaviors can be unpleasant and many solutions are available to change the behavior of your pug.

First, you have to understand that often times puppies jump on us for attention, quite simply! Talking to them, pushing them away or shouting will often have the effect of further arousing and exciting your puppy, since it gets your attention! Is this really what you want?

Second, it’s okay to be mad at your puppy if it hurts you, or, worse, knocks your kids down! However, avoid falling into the trap of punishing your puppy by scaring or hurting him! For example: 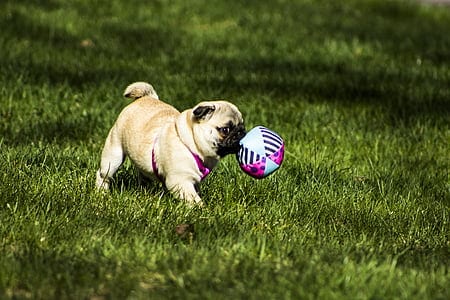 What do we do with the puppy that jumps?

Ignore the puppy that jumps (we tell him absolutely nothing). Your puppy wants your attention! Giving it to him will make him want to jump on you again! Don’t push him away, don’t tell him no! Show him that he doesn’t exist when he’s not behaving well! The best reaction is to note the situation making your puppy jump, and to teach him a more acceptable behavior. For example, show you pug to sit calmly!

The situation that makes the puppy jump

For example, before going out for a walk, use the sit command to better control the jumps and excitement related to putting on his leash. Or at meal time make your puppy pug sit down to receive his bowl of food! What if your puppy gets excited when you lower the bowl to the ground? Raise it and repeat the exercise until your puppy is calm!

Other examples include teaching your dog to sit down before getting of its cage or opening the door before going out of the house. What if the dog refuses to sit? Wait! Teach your dog that until it is seated, the door will not open! 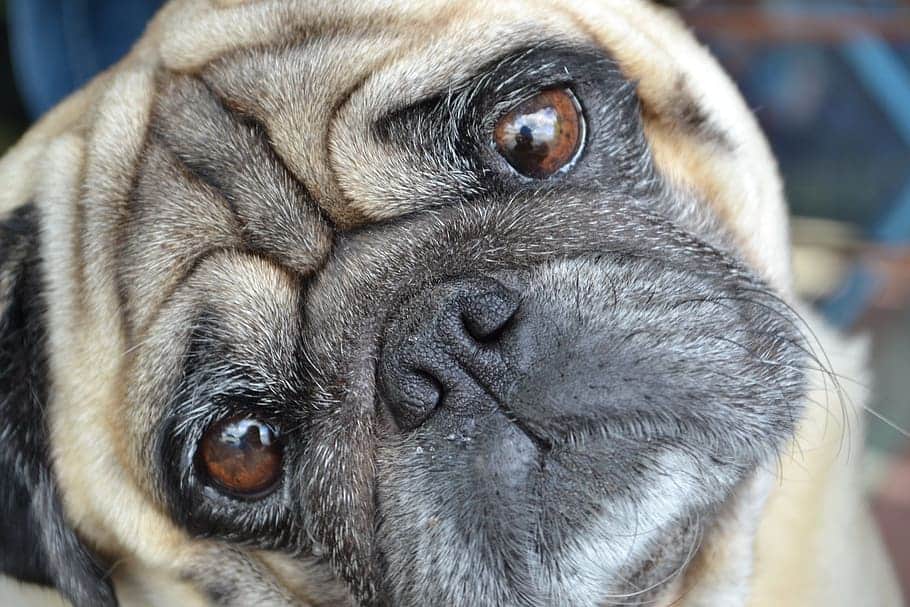 When your puppy jumps on you, it is because he wants attention! Show him that jumping is a completely ineffective way to get it! This punishment is not intended to scare or hurt your puppy. Its purpose is to take away what he desires when he engages in behavior that is deemed unacceptable. A bit like with a child who is “deprived” of the right to watch television since he has raised his voice towards his parents!

When your dog jumps on you you go to another room that is not accessible by your dog or simply get out of the house. You should repeat the withdrawal as long as your puppy jumps at you It is important to be consistent! In general, 15 to 30 seconds of “withdrawal” is more than enough! If your puppy keeps going and is having trouble calming down, you could calmly install him in his cage, in an enclosure, behind a fence or in a room with an interactive game and or a good bone to chew at to help calm him down and at the same time prevent him from practicing bad behavior. The more your dog practices the bad behavior, the more it will do it and the more difficult it will be to eliminate it. Putting your dog in the cage should not be a punishment, you should not force it into it. Your dog must also already be trained in the cage.

It is important when you decide to punish your dog (by removing a privilege) to be consistent! If you punish him once for X behavior, the behavior will not stop! You have to do it every time! Otherwise, he will not be able to make the link between his behavior and the consequence, because it too variable.

It is normal that your puppy, the first few times, continues to jump despite the withdrawals, because he has not yet understood. It usually requires several repetitions to get your puppy pug to gradually eliminate the behavior and calm down. 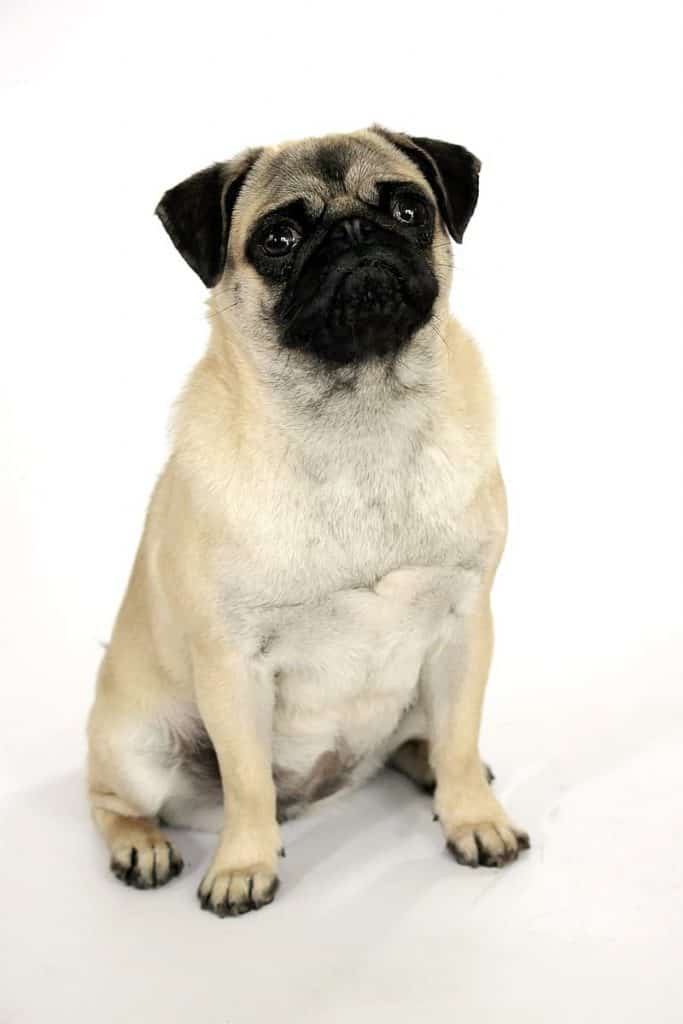 How to train a pug puppy not to bite?

Now is the time to teach your little shark what to bite … or not! First, engaging in interesting activities with your puppy will do a lot to make you “less interesting”! Jumps, bites and nibbles included! Little pug is a ball of energy and he needs interesting toys to chew on.

There are 3 types of chewing in puppies, to play, to demonstrate discomfort and over stimulation. How do you make the difference? When the puppy nibbles to “play”, it will usually come to you! When it nibbles because it is uncomfortable, it happens in a context where you handle or pet it. For example, you take him in your arms and he nibbles your hands. It’s not a game! Same thing if you touch it in a discomforting area and it bites you to stop the interaction.

With the puppy coming towards us and nibbling at us, we assume that it does so because it wants our attention or because it wants to play! It is also possible that it is too stimulated and tries to relieve himself by chewing something … you!

How to train a pug puppy not to bite: Use the withdrawal technique

If your pug puppy does not bite or nibble hard (that is, he does not put a lot of pressure and hurts you), you can redirect it to his favorite toy. If he nibbles hard (you feel great pressure, a lack of control, a pinch) use the withdrawal technique. 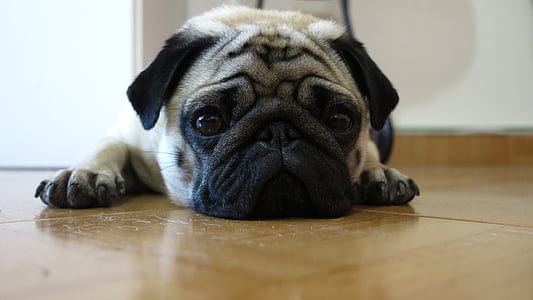 The purpose of these exercises is not to prohibit all nibbling! The goal is to make your puppy understand that his mouth has a certain strength and that he must learn to control it! So later, if it comes to bite, it will be able to control its mouth and will not create significant damage! This is one of the most important exercises to teach your puppy!

Good news, the nibbles “to play” disappear by themselves over time in more than 95% in this case, without any training! However, around 4 and 5 months, when your puppy loses its puppy teeth and its adult teeth grow, it will start chewing again! Do not worry, it’s normal.

This does not mean that your puppy is a monster or that it “regresses” or that it tests you! Giving her lots of fresh and frozen bones and toys will go a long way in getting you through these difficult weeks.

I also suggest that you play “pull a toy” with your puppy, which will teach him exactly the difference between a toy and your hands, in addition to being a great exercise in self-control and a return to calm.

How to train a pug puppy not to bite – Watch this great video!

Inhibiting its bite is important but do it the right way!

Take advantage of this period in your puppy’s life to teach him to control the strength of his bite! It will be his best life insurance! Why? Because if one day he bites a dog or a human (for example if he is afraid or upset) he will know how to control his mouth and avoid doing major damage.

Don’t think your puppy will never bite! Because anything with teeth can bite! Remember that a puppy that jumps and nibbles is quite normal. I understand that these behaviors are most frustrating and sometimes painful. However, be patient and remember the following principles: