Before we discuss how to stop a dog from pooping in the house, a distinction must be made between uncleanliness and incontinence.

In the case of incontinence, the dog does not control its needs, due to a malformation or an illness. The urine and/or stools come out on their own, while the dog is in the basket, walking, etc. It is then a medical problem, which should be addressed by a veterinarian.

In the case of uncleanliness, on the contrary, the dog defecates voluntarily, in an inappropriate place. The approach to the problem will be different depending on whether you are in the presence of a puppy or an adult dog.

When a young dog arrives at the house and it is not yet clean, it is most often an education issue. The puppy has not yet understood that it is forbidden to do this indoors. Moreover, his sphincters may not be fully functional before the age of four months.

Some puppies may already be well educated but can “forget”, especially at night, until that age. As well, you can’t hold responsible a puppy suffering from diarrhea, which prevents him from restraining himself.

How to educate the puppy

Dogs respond better to rewards than to punishments. Indeed, for a punishment to be effective, it must be applied systematically, and ideally, while the wrongdoing is being committed. 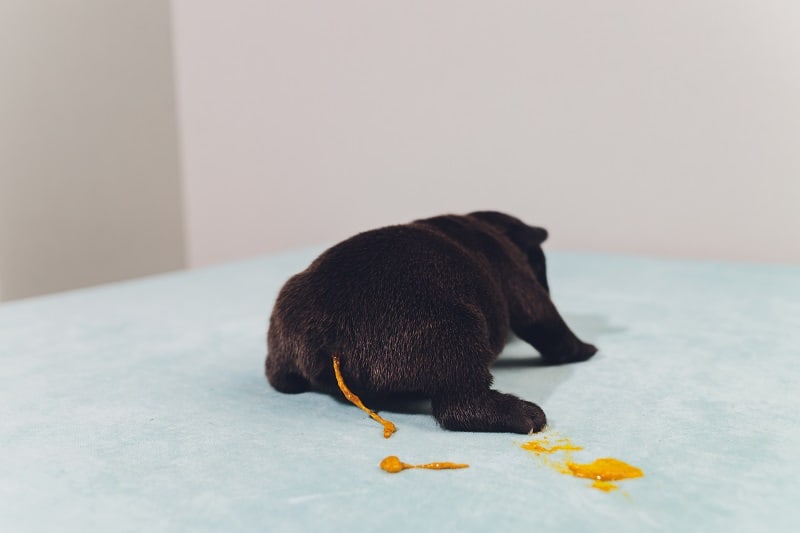 If the puppy is defecating on the mat one out of 10 times, the punishment should be immediate, otherwise it will be quite ineffective.

Education for cleanliness will be based on rewards and positive reinforcement. You must congratulate the puppy every time he does outside, be very demonstrative for he understands that what he did is very good.

Take the puppy out whenever you anticipate he needs to defecate, particularly in the morning when getting up, after play, after eating, when we see that he is going around in circles, etc.

Outside, we will stay next to him until he has defecated, and when he is finished, we will congratulate him abundantly with rewards he enjoys such as caresses, toys or treats.

The same process should be followed if you go out for a walk or visiting friends and family. 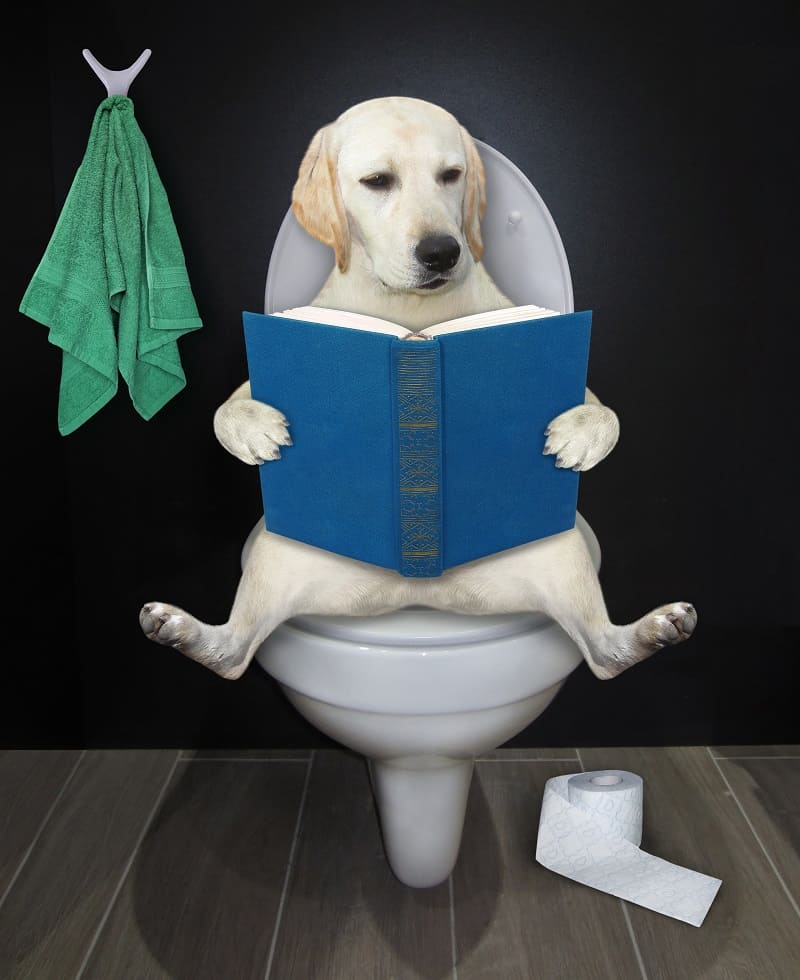 How to stop a dog from pooping in the house: after the fact behavior

What attitude should you adopt when the puppy has defecated indoors? As we discussed above, the punishments are not very effective, except when the puppy is caught in the act. We can then shout a “no” very loudly, clap the hands, or somehow distract him, after which the puppy will be brought out.

If you arrive a few minutes too late, scolding the puppy is useless! Sticking his nose into his poop before correcting him, in particular, is totally ineffective.

On one hand, dogs love to sniff excrement and forcing your dog to put his nose in it before correcting his behavior will seem incomprehensible to them. On the other hand, the puppy will associate the punishment to the presence of poop on the ground and not to the action of defecating indoors, which can go back several hours.

Therefore, the punishment will not prevent the puppy from starting over and he will be puzzled by these punishments and will be afraid each time he sees one of his droppings on the ground, which will make the owner say, wrongly: “he looks guilty, he knows very well he did wrong.” 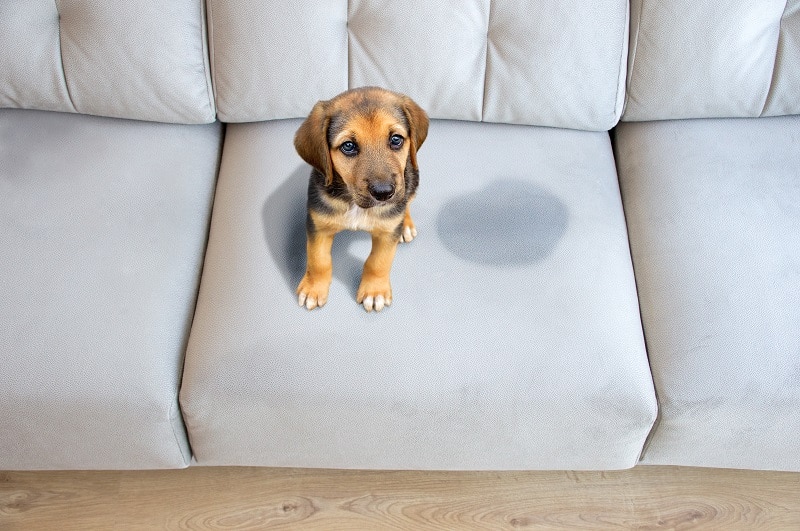 When you discover the wrongdoing the best attitude to adopt is to pretend you haven’t noticed it. Then, take the puppy out of the room before cleaning up. He would certainly find it very amusing to see you down on your knees cleaning up his mess. Then, bring the puppy at the right place outside, wait for him to poop again, then congratulate him!

What about the newspaper stunt?

Some owners try to teach the puppy to defecate on a newspaper on the ground. In most cases, this practice should be avoided.

This training should be reserved for small dogs who will be locked up for long periods of time, knowing that this can lead to persistent behavior in some dogs who do not understand why they can do on the newspaper and not on the carpet.

He does it when he’s excited!

Some puppies urinate under them when they are very excited, especially when the master comes back home or when they are afraid. This is emotional urination, which passes most often with age. We should not punish the puppy in this case. 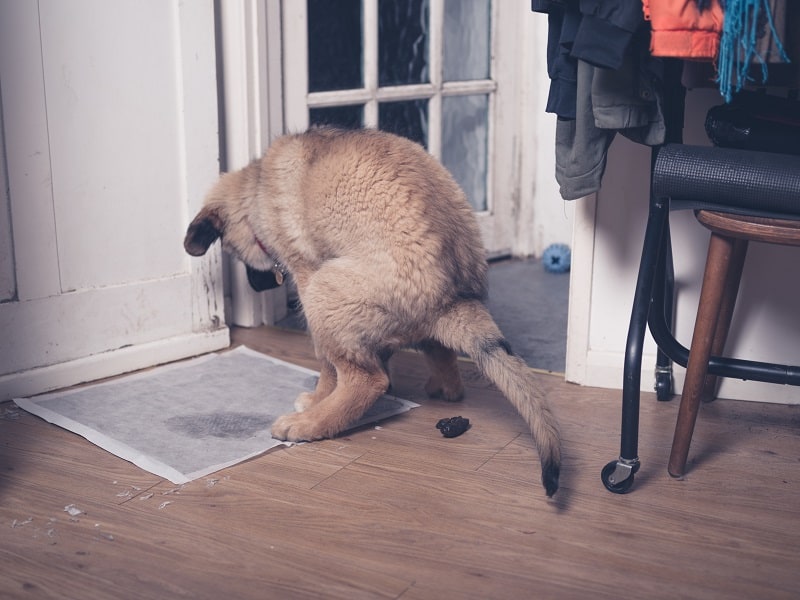 First because he does not control these urine emissions.

Second, because in dogs, squatting and emitting a jet of urine is a sign of submission (in addition to fear). Scolding a puppy in the event of emotional urination increases the risk he will urinate even more!

What if my puppy has genetics or health issues?

More rarely, the puppy’s uncleanliness may result from a behavioral disorder. The uncleanliness will then have unusual characteristics, for example, a puppy does all its needs in his basket, which is contrary to the natural behavior of the dog.

Or the misbehavior persists well past the age of four months, despite an appropriate education.

Or the problem may be associated with other behavioral anomalies, for example, a puppy who is afraid of everything, who eats only at night when no one is looking at him … or on the contrary who is always on the move, nibbles without controls, destroys whatever it finds.

We are then in the presence of a real behavioral disorder (reactional depression, deprivation syndrome, hypersensitivity-hyperactivity syndrome, etc.), which can have serious consequences. In such cases, you should consult a veterinarian as soon as possible.

How to stop a dog from pooping in the house: the adult dog

The case of the messy adult is often more complicated than that of the puppy. The issue could be a lack of toilet training, in the case, for example, of a stray dog taken in as an adult who was not trained when he was a puppy.

It could be even a kennel dog who has always defecated in the yard and who decides to return to the house at four or five years old.

In such cases, the education techniques are the same as for the puppy, but the results will be more difficult to attain and will take much longer to obtain. 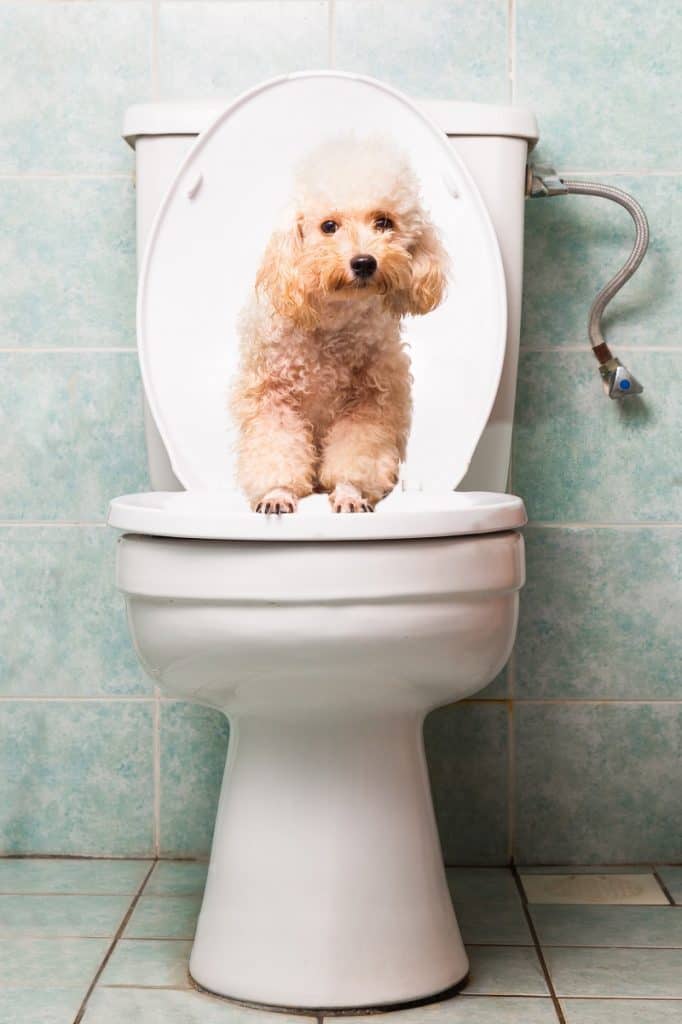 In most cases, however, the uncleanliness of the adult dog is due to a behavioral disorder. Hypersensitivity-hyperactivity syndrome, anxiety, hierarchical conflict, confusion state in the elderly dog, to name a few, are common conditions leading to the problem.

The appearance of the droppings, their location in the house, and other aspects of the dog’s behavior, will help identify different possibilities. Uncleanliness can only be cured if the root cause of the behavioral disorder is identified and treated, within the framework of a behavioral consultation.

As a final word, according to the results of a study published in 2013, castration, whether surgical or chemical with a desloreline implant, improved urine marking behavior of dogs, by around 50%.