I wonder how long it takes for the vet to get the question during a consultation, how long does a male dog have to wear the cone after neutering?

Many pet owners refer to it as the “the collar of shame” because it bears the title of a comedy movie from Pixar studios. Film that I urge you to see, collar of shame or not.

No, it’s true, who had the idea of creating this instrument of “torture” that is used on a regular basis? In principle, it’s very simple idea with a simple objective. A plastic dish attached to the collar, the objective of which is to prevent the dog from licking or scratching any part of the body. 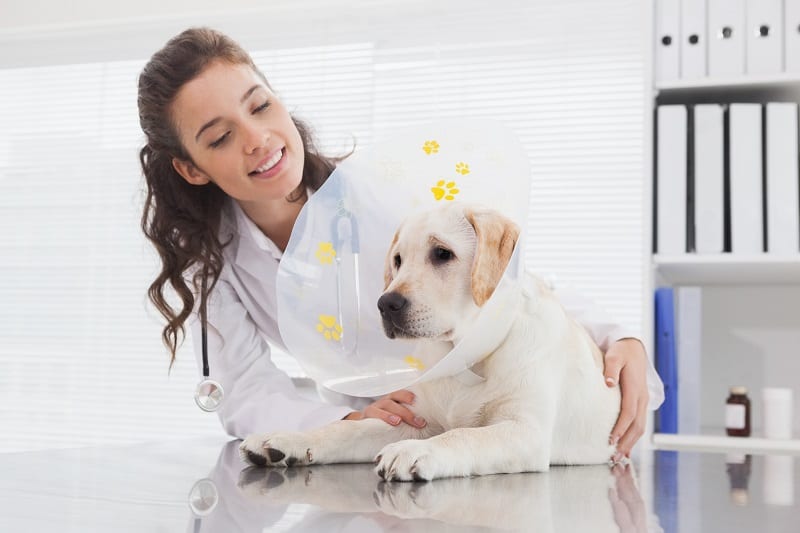 The veterinary collar, also called cone, is a protective accessory for dogs. Used temporarily, often after an operation or an accident, prevents the dog from biting, licking or scratching. And keeps him away from dramatic consequences.

More specifically, it is commonly used to prevent a dog from licking stitches, a wound, a bandage, a drain, etc. Its size will depend on the dog’s anatomy, of course, but also on the area to be protected. Given the flexibility and agility of some dog breeds, it is better to use a cone to protect a wound on the back or on a leg.

Little appreciated by dogs and by their master, the veterinary collar is nevertheless essential in many specific situations such as: 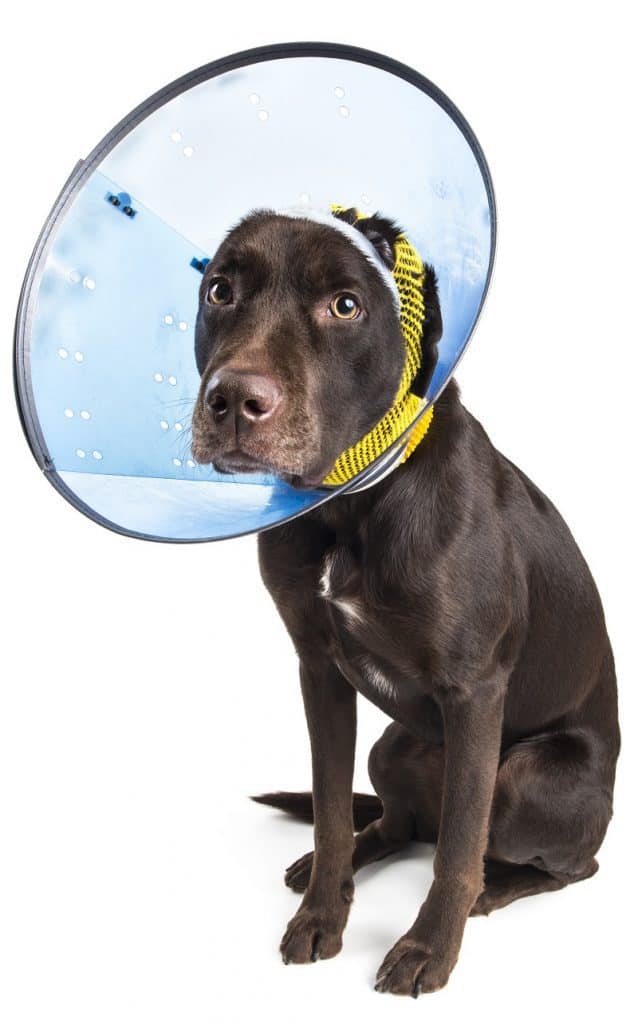 In the above cases, the veterinarian will make the recommendation to put a cone on the dog for safety precautions.

It is important to get the idea out of your head that dogs know what’s good for them. They won’t spare their stitches if they itch. They won’t refrain from licking like mad an open wound if it itches. And no, licking a wound is not good for the healing process!

At best, in the minutes following an accident, the licking removes some of the dirt, but afterwards, the tongue is a real bulldozer which plows the very fragile scar granulation tissue, slowing down, or even preventing, the proper progress of said healing.

How long does a male dog have to wear the cone after neutering? Anecdote #1

A veterinary reported that he had to put down a dog following a simple castration with no history of some health disorder. Three days after the operation, the wound must have started to itch and it’s quite normal. 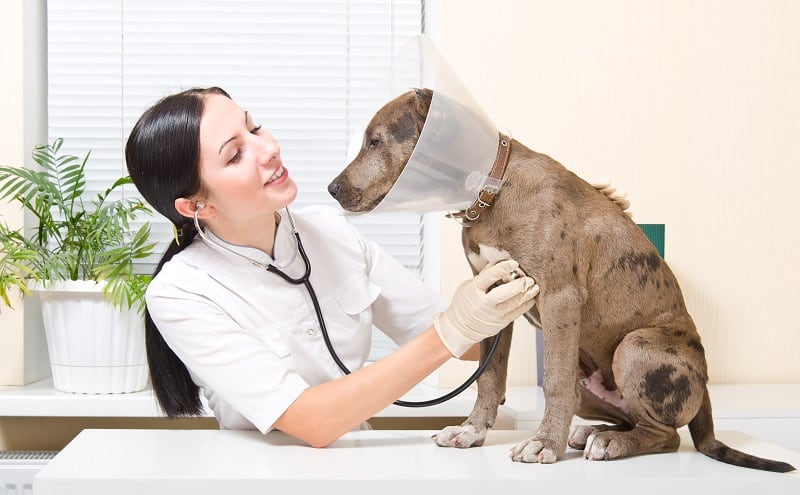 However, the dog licked himself, nibbled no doubt, and popped the cutaneous and then subcutaneous suture. Then he literally devoured himself until he reached his intestines, which he ended up cutting. The damage was catastrophic and the result of a few minutes of inattention without a collar.

How long does a dog need to wear a collar after surgery? Anecdote #2

Along the same lines a bitch had blown the abdominal sutures after a caesarean. She also nibbled her intestines and died the next day.
The veterinarian reported that the dog owner, an informed breeder, had mentioned just after the caesarean that she never put a collar on her dog because it is useless anyway as she is very wise. It probably only took a few minutes for the dog to tear off the bandage and satisfy his urge to scratch.

There are tons of similar stories, hopefully less dramatic. Re-intervention with wound trimming to re-suture, installation of staples, tearing of drains, etc. etc. That’s why veterinarian always recommend a collar after surgery, especially on dogs. 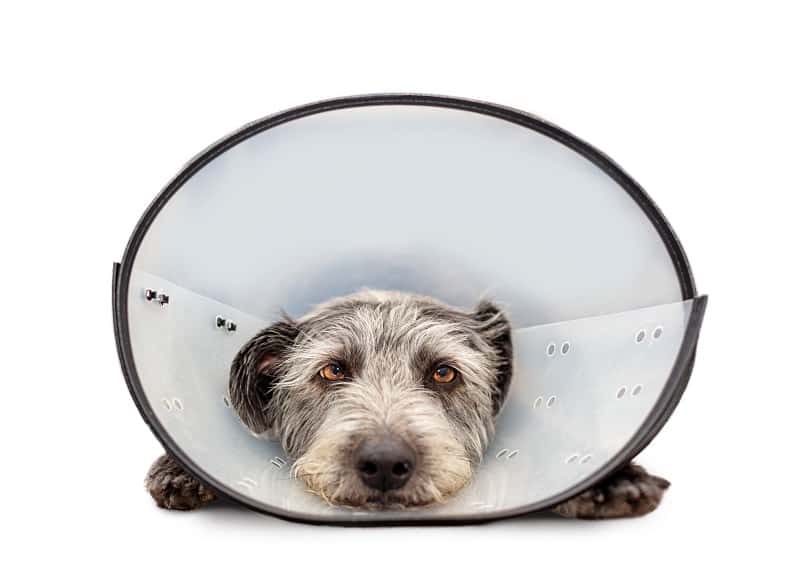 They don’t trust the animal for a moment. A scar is like a mosquito bite. When we scratch, at the moment, it’s exhilarating, so we continue, we scratch, we rub, we itch, we sometimes tear. The more you scratch, the more it itches. It’s a vicious circle from which the dog will never get out of.

So please don’t underestimate the benefits of a dog collar.

Disadvantages of a dog cone

Collars are not perfect and can even be dangerous for young children or elderly people when a dog gets excited and runs them over and blows up their legs, or the like. Also, beware of furniture with a dog wearing a collar is running around the house!

Protective cones also cause a number of inconveniences to the dog:

How long does a male dog have to wear the cone after neutering?

The collar must be left on for the entire healing period. This period generally lasts between two to three weeks. Do not remove the dog cone before the time recommended by the veterinarian. If your dog opens up or infects his wound, it may require aanother expensive surgery! 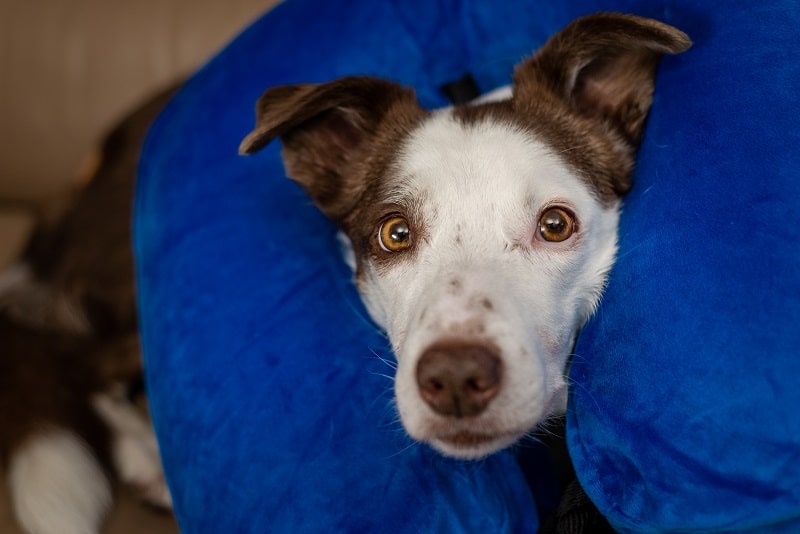 Of course, there are other means of restraint, as a number of dogs cannot stand the collar (although most get used to it after a day or two). Bandages, shackles, buoys, these are solutions which are not suitable to all situations but which can be worth considering.

There are also a few alternatives to the rigid plastic collar: 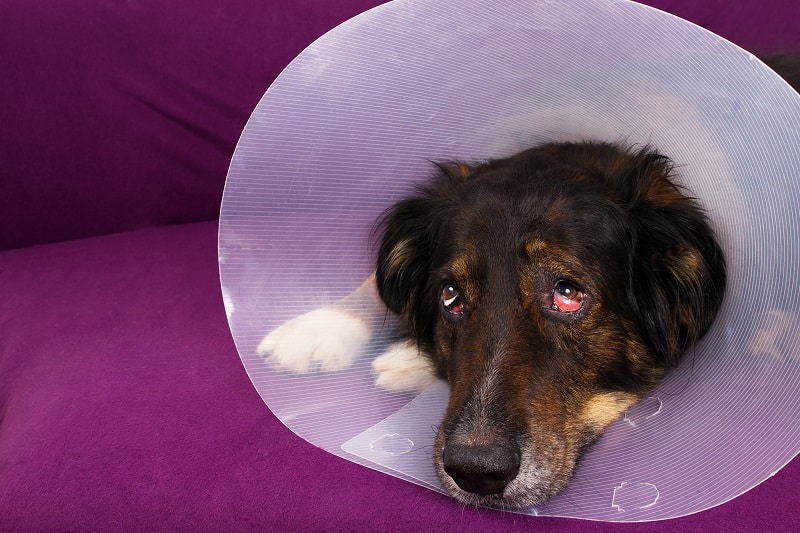 Cost of a dog collar

Your veterinarian clinic usually supplies the rigid plastic collar for your dog. However, you may want to opt for an inflatable or a flexible fit collar, which are in the $20 to $40 price range.

Supervision of the dog

The discomfort of the collar and the postoperative pain can influence the mood of the dog and make him aggressive. We must ensure that he does not try to remove it.

On the other hand, if your dog is obedient, you can remove his collar when you can watch him (for example to facilitate meals). But be careful that he does not touch his wound.