Service, assistance, police and army dogs, our canine friends are used in various fields for their particularly developed senses, more specifically their olfactory capabilities. How do dogs know you’re sick? In the medical world, dogs’ senses are used to assist in the diagnosis of human health issues.

Dogs have the ability to sniff and detect narcotics, missing persons, explosives, and a lot of other things thanks to their highly developed olfactory senses. What is commonly referred to as a dog’s nose, which in broader terms would refer to its olfactory system, is made up of several elements that allow it to perceive odors much better than humans, by as much as 100,000 times! This is due to the fact that dogs have approximately 220 million olfactory receptors while human have only 5 million. Talk about sniffing power! 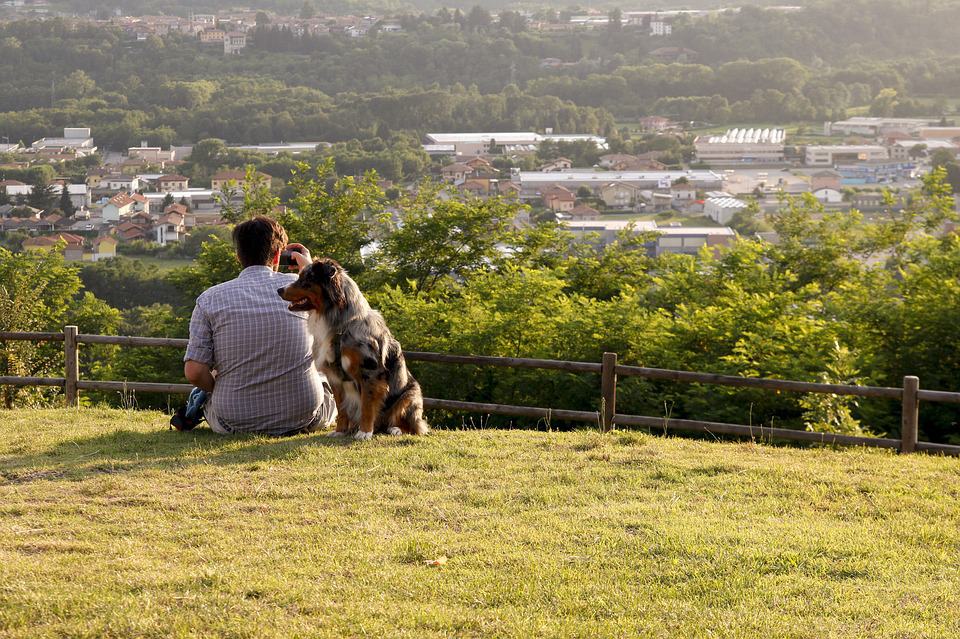 This is also why our 4-legged friends can detect certain medical pathologies even before you know them. How do dogs know you’re sick? Discover 6 diseases your dog can sense in humans:

Dogs have the ability to detect cancer at an early stage and from samples of human urine or saliva, with the precision of modern equipment!

Our canine friends can detect a chemical compound that the body secretes during an episode of hypoglycemia, which helps the dog to alert its owner and prevent him from being disoriented or losing consciousness.

This is a serious brain disorder that affects the sleep cycles and the normal periods of the day a human is up or sleeping. The patient may fall asleep while walking, which is life threatening. Dogs can detect biochemical changes in the form of a scent and therefore alert their owners before a seizure. 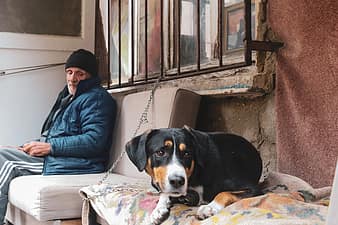 Although migraine is not a serious pathology, it is nonetheless restrictive, even disabling. According to studies, dogs can alert their owners an hour or even two before the onset of the headache. Assistance dogs are specially trained for this. They can help the person affected better prepare and take medication before the migraine starts hitting and therefore mitigate its effects.

Dogs sense our emotions and can sense our stress and anxiety. They may even sense our fear, which manifests as hormones that the dog picks up.

There is some controversy around the detection of epileptic seizures and convulsions by dogs, as there is no specific scent or marker that alerts on their onset. But the trainers educate the dogs to help patients during and after the attack. This issue merits a more in-depth discussion on the dog’s ability to detect the advent of such condition. 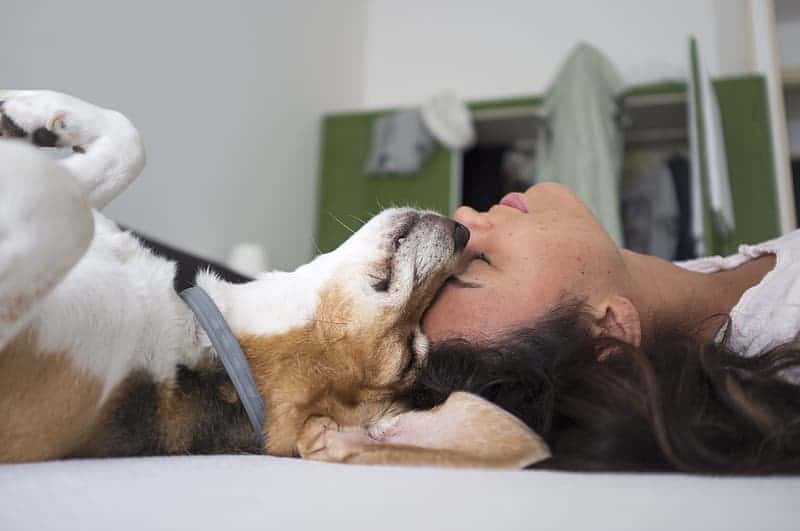 6. How do dogs know you’re sick? – Anticipation of an epileptic seizure

As mentioned above, the scientific world has obtained strong evidence of a dog’s capacity to detect certain human health conditions, such as cancer and diabetes with his only flair. But we know a little less that it is also capable of sensing the onset of an epileptic seizure.

With an olfactory sense 200,000 to 2 million times better than that of humans, depending on the species, the dog can has the potential to be a formidable asset for people suffering from epileptic crisis in their daily life.

Here’s the actual story of Shelly Ryan who normally sees warning signs such as a hand tremor or a migraine five to ten minutes before a seizure. But thanks to her dog Bouncer, a two-year-old female Labrador, she is warned 15 to 20 minutes in advance. Alerted by her senses, the dog comes to lick her hands insistently. Sometimes she puts her paws on her mistress’s knees and licks her cheek. “As soon as she does that, I will immediately lie down,” explains the 34-year-old woman living in Wolcott.

Bouncer, who has never had any specific training, is one of the growing number of assistance dogs specializing in epilepsy. According to Assistance Dogs International, a coalition of associations bringing together 160 members around the world, 31 associations offer assistance dogs for epilepsy, while demand is growing. 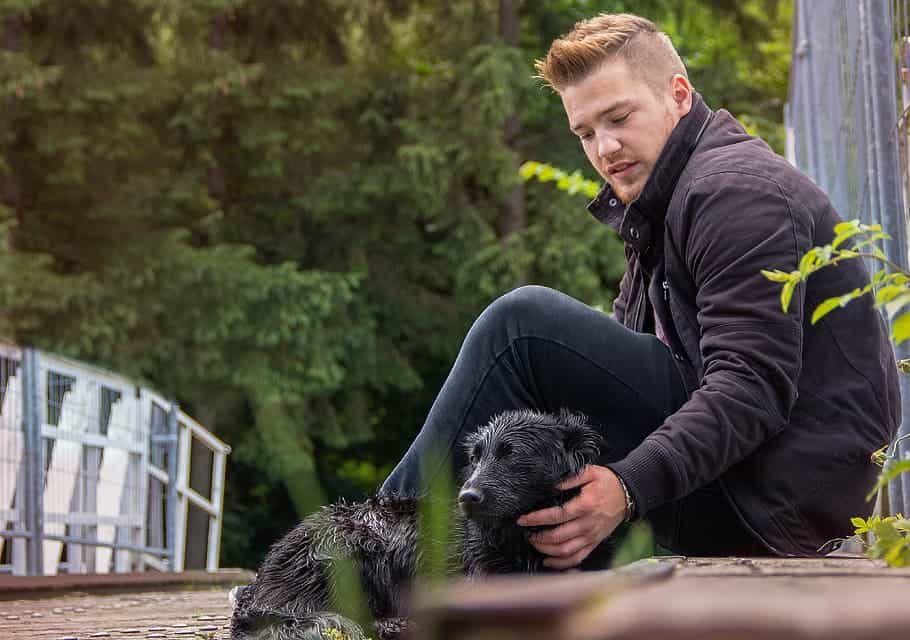 How do dogs know you’re sick? While researchers are not unanimous on the meaning of the dog’s behavior and its senses, those who train them assure that man’s best friend can do much more than go for the slippers or drool on the newspaper.

For Frances Rosemeyer, program coordinator at Canine Assistants, an organization that trains and provides assistance dogs, this flair “is not a quality that is developed in training, it is like a sixth sense”.

Dogs placed with patients affected with epilepsy have proven their ability to detect a seizure before it occurs. According to Rosemeyer, who places around 70 dogs each year, “These will give a warning that a crisis is going to occur. And it is the dog who decides on the type of warning”: barking, scratching the ground, licking or even sometimes pushing his master towards a chair.

Roger Reep, professor of neuroscience at the University of Florida, reported in a preliminary study in 1998 that dogs made good use of their extraordinary sense of smell to perceive internal body odor that was almost undetectable and was clearly associated with epileptic seizures. 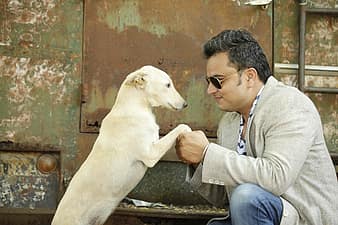 “Whenever something as basic as a change in brain waves occurs, it makes sense that it triggers a nervous system response,” notes Professor Reep.

Deborah Dalziel, who worked with Professor Reep on this study, warns anyone wishing to acquire such dogs. “Not everyone can interact with these dogs like that,” she says, pointing out the difficulty this poses for owners who are often very sick. You must also be able to know how to give orders, continue training and decipher the dog’s behavior.

“You have to learn to trust your dog because your life is literally put in their … paws” she says. Potential buyers of such assistance dogs should also be wary of companies that offer such animals for large sums, without the guarantee of adequate training.

Darlene Sullivan, CEO of Canine Partners for Life, a Pennsylvania-based not for profit organization, shares 15 years of experience identifying dogs capable of sniffing the approach of a crisis. But she points out that no animal is actively trained for this specific responsibility. During the two years of training, “you get used to live with these extremely intelligent and affectionate dogs. I call them the dogs that never sleep, they close their eyes, but if the wind picks up, they will quickly wake up”.