French Bulldog puppy training is not difficult at all, but only for those who want to quickly teach their commands and not wait for a later and so-called more appropriate time. So that you know, that time may never come as the puppy grows every second, turning into an adult family member with its own foundations, rules of behavior and its own point of view on the world around him.

In the absence of upbringing and training, a dog’s worldview can differ significantly from yours. So judge for yourself, is it worth to engage in education starting in the early months of the French Bulldog’s life?

Read on as this article will provide all the information you need to establish an appropriate connection with your French Bulldog, in the shortest possible and move in the right direction.

As long as the puppy is small, as the dog handlers say, you can “mold” him the way you want, like an ideal and calm animal from plasticine. As you gradually establish a connection, he will perceive you as standing higher in rank. Again, if you start raising a puppy at around 2-3 months, up to 5 months the character can be formed. Pass that period, things will get more difficult. 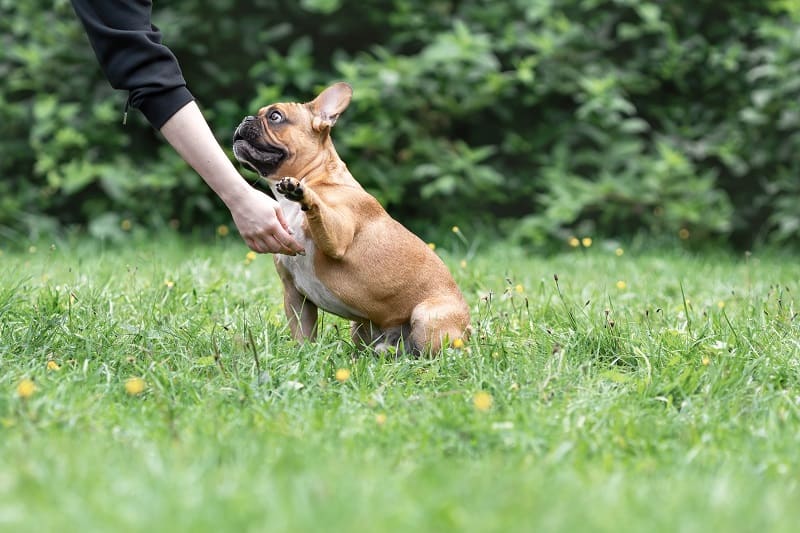 The difficulty lies in the fact that the puppies are very playful and inattentive at the age of 2 months. They are often distracted by sound and movement. Therefore, you need to conduct training sessions in a remote and quiet area at all times.

You should set up your puppy in an area away from heating appliances, TVs, kitchen microwaves, coffee makers and washing and drying machine. All this can scare your puppy and he will simply become uncomfortable with the learning process.

No matter how hard we try to evade the French Bulldog puppy training process or are tempted to quickly quit the education process because the puppy is completely distracted with other things, you need to be persistent and keep going. It will pay off with high interest in the future.

Just imagine yourself with a smart French Bulldog on the street, proudly walking beside you on a harness with a leash, not trying to evade or not barking at the first running cat he sees. It is for such a calm and disciplined behavior that you and those around you need to fight for. Believe me, the education efforts are not that huge and so much worth it.

Another plus with early training is the safety of the dog itself. All the “tidbits” lying on the street will be happily eaten by the yard dogs or cleaned away by public service. Your dog will not be tempted to bend over and pick up garbage, thereby preserving his stomach and his health.

Highlights of the learning process

Try to get the dog used to you, your presence, and your voice as quickly as possible. Several rules will help him remember his name:

It should be close to a sound and not a growl. The type of sound containing letters such as “r”, “h”, “w”, “z”, “f”, should be avoided as much as possible. A suitable name for a French bulldog should consist of 1 or 2 syllables.

Always say his name in positive situations and avoid saying it when you are in punishing mode.

French Bulldog puppy training is not easy, particularly when it comes to potty training. With small dogs, who still do not know how to fulfill their needs at the right place, it’s usually necessary to use paper or fabric pads or even a crate to prevent the dog from doing it everywhere in the house. Of course, we must start potty training your puppy as soon as possible. 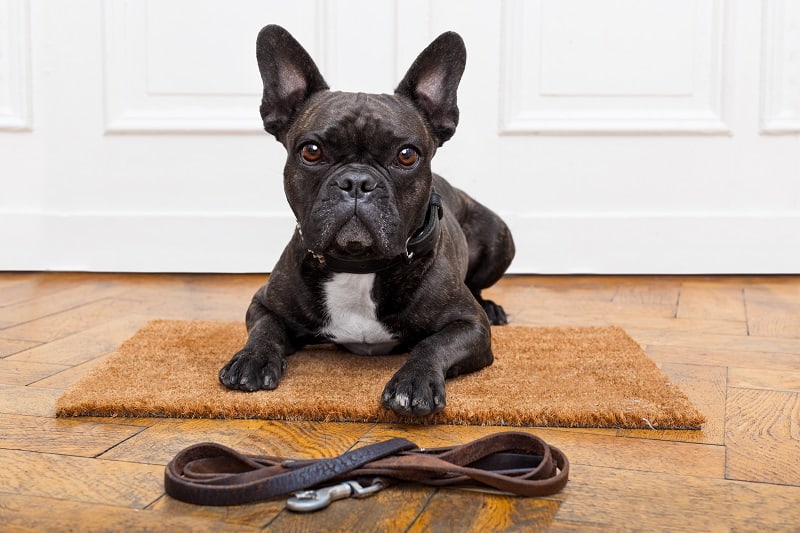 Therefore, start the routine right away and take him out first thing in the morning, after each meal (6 times a day), after drinking and after play time. If you start teaching him at a very young age, that’s great, your carpets, flooring and other accessories will stay in good condition!

As the dog ages, he may develop a sense of dominance and possibly have problems with the toilet, but any corrective training should be much easier at that stage.

If your French Bulldog understands where to go to relieve himself but there are times when you do not have time to bring him to the toilet, you need to monitor his behavior and adjust accordingly.

Remember that a French Bulldog is typically not prone to ask to go outside and will tend to stretch things to the last minute because he feels much better in the house.

With the wrong upbringing, the French Bulldog can get angry, grow up aggressive and growl for no reason. The dog has no serious intentions to bite, but only to intimidate, so there is no need to put a muzzle on. Besides, due to the structure of the muzzle and throat, wearing such “accessory” is not recommended. Focus instead on the education process and you will never need to take on such intense measures. 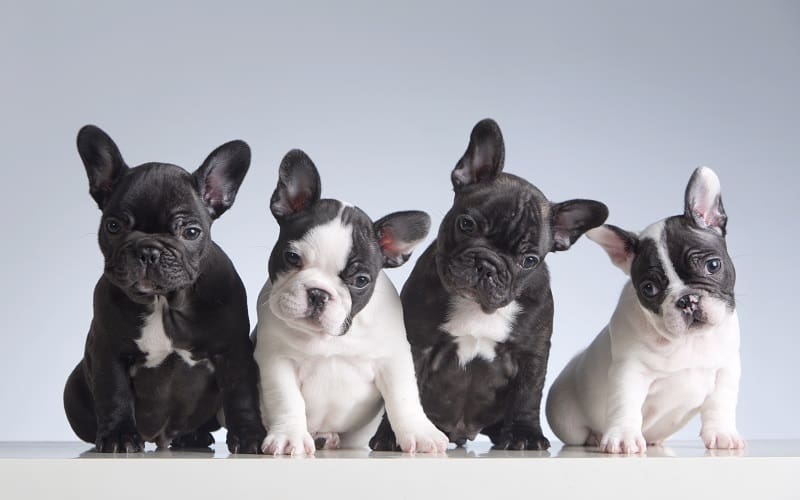 If you don’t know how to train your dog to obey you, here are some rules for successful parenting:

French Bulldog training is very important in education. You should train the basic commands as this will help with his self-control and discipline.

When teaching basic commands, try not to overload the puppy and stick with one for a week or so. Keep in mind, your puppy has to grasp many other behavior lessons, is going through toilet training, is memorizing names and many other things. So be easy on him! 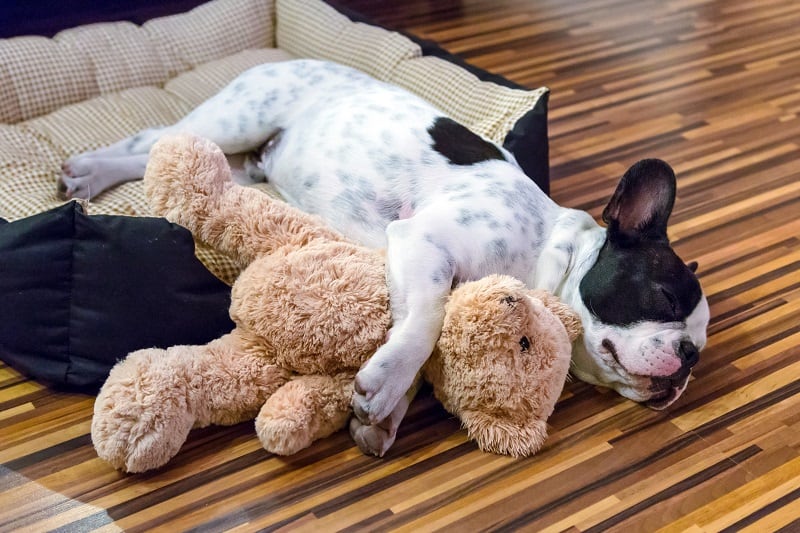 For example, if at the age of 4-5 months your puppy chews on everything including your furniture, then he is teething. Milk ones fall out and new ones grow, permanent and strong. Make it easier for him by providing him teethers, chewing toys and bones. However, under no circumstances should you give him natural bones. Try to educate the puppy so that he knows what he needs to chew on, to wean him from biting your hand, perhaps by putting a toy in his mouth.

At that age, it is very important to pronounce words of a teaching nature. When feeding, there are also nuances, because the puppy can look into your plate with a tearful glance, waiting for “manna from heaven”. But no, you will not be led to such “temptation”.

Feeding is a positive emotion

Feed at specific and consistent times in a day with a moderate amount of food in the bowl. Hold the bowl with your hand and call your dog by name. Hold the bowl in this position while the puppy is eating, so he will understand that you need to respect the master and obey him, because food brings a lot of positive emotions. Basically, like any game that builds contact. Let it be held under the auspices of the bulldog, “I will follow the command and receive a reward”.