French Bulldog allergies are one of the most common diseases of this breed. Such a reaction indicates an increased sensitivity of the dog to some form of irritant such as food, medicines household chemicals, parasites, etc.. When the animal’s body is exposed to an allergen, various symptoms begin to appear, indicating an allergic reaction. Signs of allergy are different and similar to the symptoms of other diseases, so only a veterinarian can establish an accurate diagnosis.

An allergic reaction of the body can manifest itself both to food already present in the dog’s diet or to newly introduced ones. Allergies are most common in puppies under 6 months of age. The animal’s immune system often reacts to proteins (chicken, beef, veal, fish), milk, eggs, yeast, soy, red vegetables, fruits, and fish oil. This type of allergic reaction has no common symptoms and can manifest itself in different ways.

Moreover, intolerance may not appear immediately, but after a certain time. It is impossible to determine the presence of an allergy by a blood test or microscopic analysis of a sample of the skin. Only special tests, based on trial and error, are effective at identifying the specific agent causing the allergic reaction. 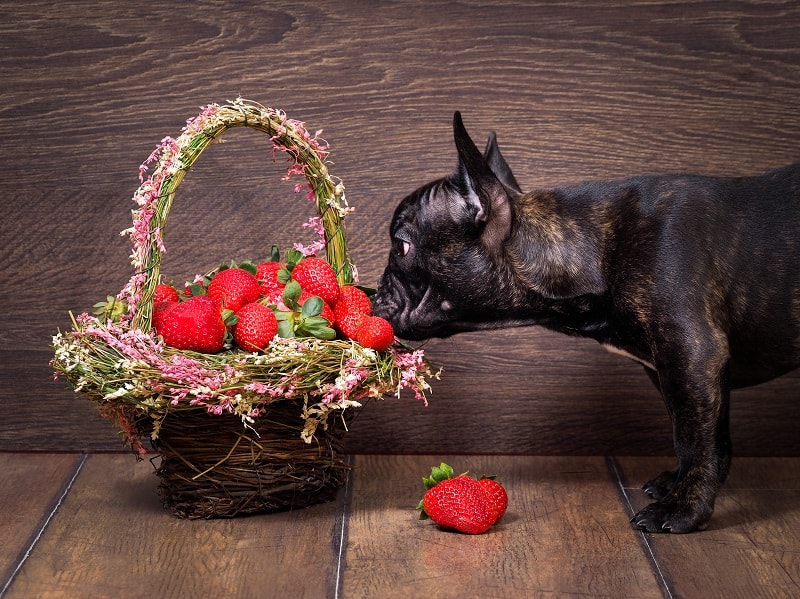 Such a reaction in the French Bulldog can occur when the dog is exposed to household chemicals and cosmetics (shampoos, balms, dog care products). Sensitive skin may cause your dog to react to some grooming products. If the French Bulldog is allergic, it is recommended to choose hypoallergenic shampoos, lotions and creams for him. Dermatitis can also manifest itself as a reaction to the fur, dandruff or skin particles of other animals or from humans.

When the immune system becomes dysfunctional, the French Bulldog’s body can start producing its own allergens. 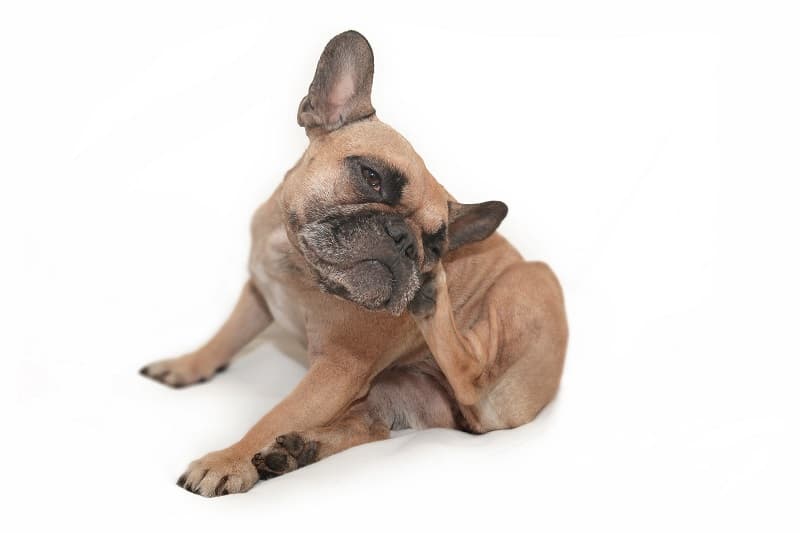 This hypersensitivity condition manifests itself in the form of a reaction to bacteria, viruses and internal parasites. Bites of blood-sucking insects such as ticks, mosquitoes and bees, can also cause an allergic reaction of varying severity (up to anaphylactic shock). 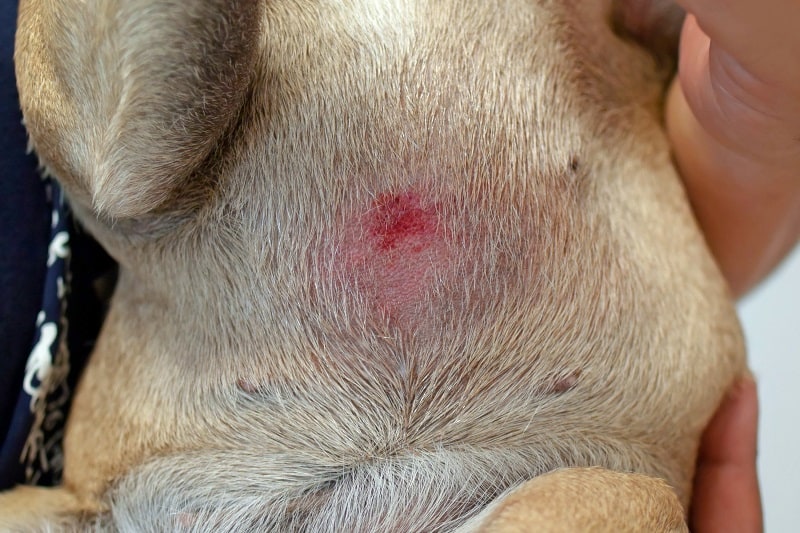 In addition to the appearance of one or more of the above signs, the animal’s behavior may also change. Your canine friend can become restless and irritable, shake his head, constantly scratches or gnaws at the area where the rash appeared. Limb irritation can also occur and lead to pain and lameness.

When observing how allergies manifest in French Bulldogs, pay attention to the areas affected. Itching in the perineum or tail may be a reaction to infection with helminths or ectoparasites. The skin can also begin to itch due to diseases of an infectious, immune or systemic nature.

There are many reasons for the manifestation of allergic reactions. Even a perfectly healthy French Bulldog with a balanced nutrition and proper care may have intolerance to a substance. The main causes of French Bulldog allergies are the intake of food that causes a negative reaction in the body or exposure to a non-nutritive substance.

An allergen can be a natural product or a component of ready-made or processed dog food. Often, intolerance manifests itself when the dog eats prohibited products (smoked, fried and salty foods, spices, chocolate, sweets). 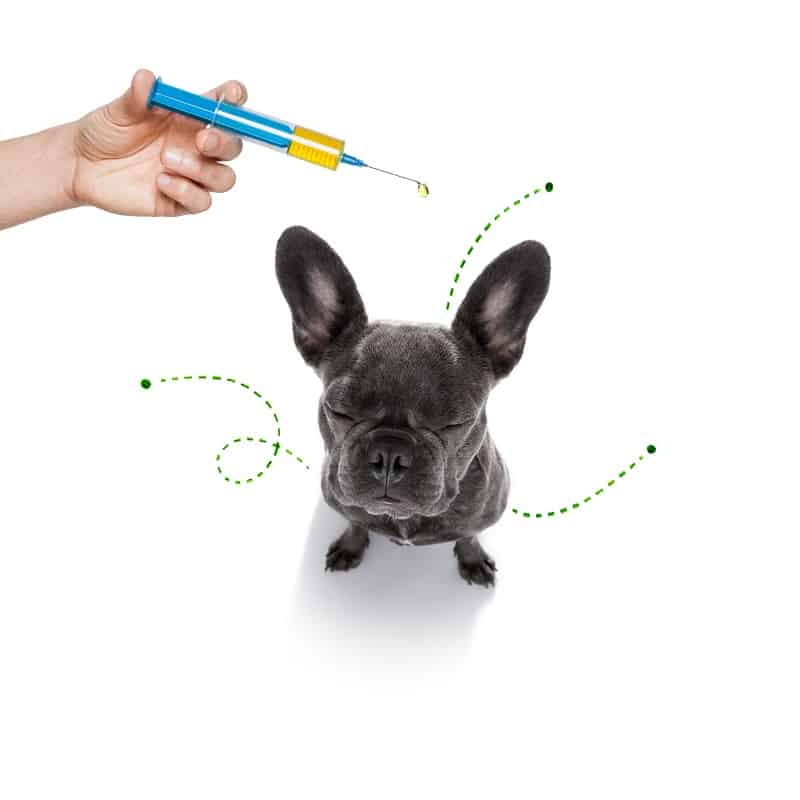 The cause of allergies in the French Bulldog can also be medical drugs, therefore, when given a vaccine or medication, you need to put the dog under observation for a few hours. Intolerance can also be caused by contact with detergents, shampoos, cosmetics, pollen, dust, and hair of other pets.

How to treat allergies in French Bulldogs

Dog owners must be ready to quickly provide first aid to their canine friend in case a strong and severe reaction is observed. In such a situation, the dog must be given an antihistamine (suprastin, etc.), and immediately taken to the veterinary clinic. Allergic dermatitis is treated with brilliant green (wounds), furacilin solution (scab on the ears). If vomiting occurs, you need to stop feeding the dog for 24 hrs and monitor the well-being and behavior of the dog.

Therapy includes three main areas of intervention: identification and elimination of an irritant, correction of a hypersensitive state, prescription of symptomatic drugs against allergies.

Identification of an allergen in case of food intolerance is carried out using special tests. After determining the reason, the dog is submitted to a protein-free diet and sweets are totally excluded. When prescribing medications, drugs that stop inflammation and drugs for parasites are not used. In some cases, antifungal and antipruritic drugs are prescribed in the complex. 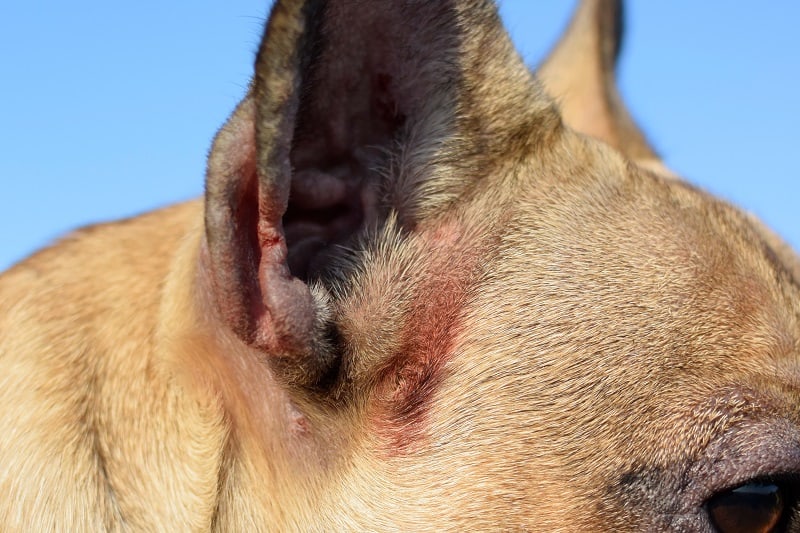 Given the characteristics of the breed, owners are advised to take preventive measures for possible French Bulldog allergies. They include keeping your dog from known food and non-food substances that can become allergens. Eliminate foods that cause allergies from the diet (especially for puppies under the age of 6 months), carefully observe the dog when adding a new item to the menu. Stay disciplined and never give your dog prohibited foods.

The main rule when drawing up a diet for French Bulldogs prone to allergies is the complete exclusion of the irritant, because food intolerances are cumulative and the response only compounds over time. An appropriate diet consists of natural hypoallergenic or premium processed food. Food supplements with B vitamins and yeast can also be appropriate but need to be are given in low quantity and with caution.

When choosing grooming products, give preference to hypoallergenic cosmetics. Ventilate the room where the dog hangs around and keep him away from household chemicals. Do not give medicine to your dog without a veterinary’s order

During treatment, vitamin and mineral complexes must be completely excluded. Treats and chewing toys are also prohibited. After the allergic attack and its treatment, feed your French Bulldog with rice or buckwheat porridge for the first 3-4 days. Then, boiled turkey or lean sea fish can be added to the diet.