This can be an indication that your dog will most likely need to be visiting the veterinarian, as coughing should not be taken lightly.

A dog will cough after drinking water most commonly because of either a collapsed trachea or Kennel Cough.

There are other respiratory issues that can cause coughing after ingesting water, but these two are by far the most commonly seen in conjunction with drinking and eating.

It is also possible that your dog just drank too quickly and, if so, there are no health risks at all.

This article will help answer your questions about your dog and why he is coughing after drinking water.

The trachea is also known as the windpipe for some. This important airway is a tube made up of small rings of cartilage that connects the throat to the lungs. There is also a thin membrane of tissue that helps to complete the internal anatomy of the trachea. 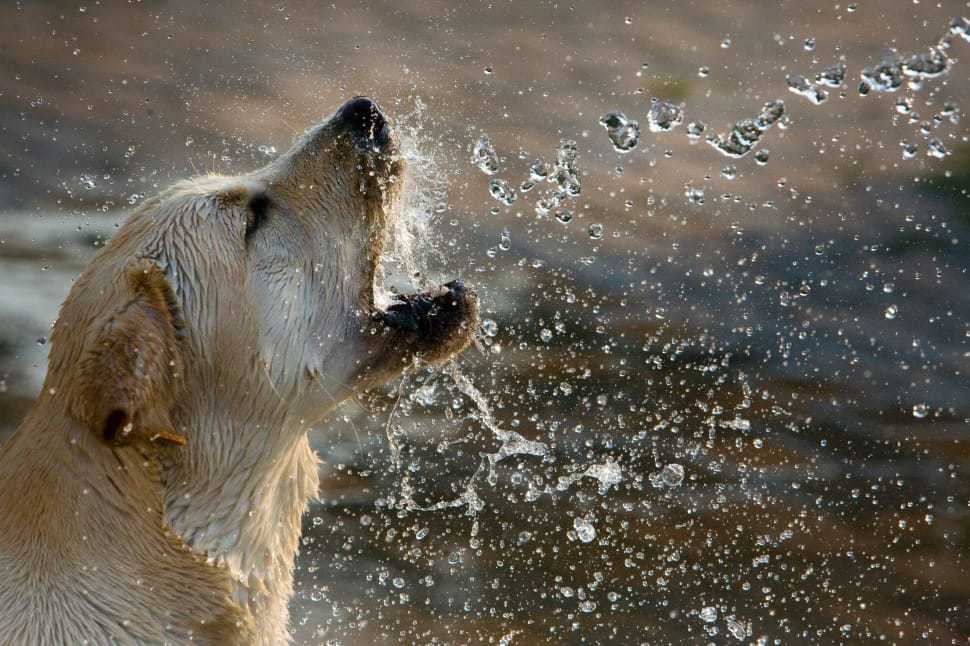 Symptoms of Tracheal Collapse and Who Is Most Affected

The signs of tracheal collapse usually include excessive coughing, especially during excitement and exercise, difficulty breathing, low energy and in more severe cases, their tongue or gum color will be blue or grey.

If they are turning an unhealthy shade of purple, blue or grey, they need to be taken to the veterinarian immediately!

Tracheal collapse is more commonly seen in small breed dogs, especially those that are overweight. Pomeranians, poodles, yorkies, chihuahuas and pugs are typically the most affected.

Why Does Tracheal Collapse Cause My Dog To Cough?

A pet will develop tracheal collapse if the rings or cartilage lose any of the rigidity and strength or if the inner membrane starts to sag. This will cause the delicate trachea to collapse, cutting off airflow and making it very difficult for the dog to breathe.

The reason that tracheal collapse causes coughing after drinking is because as the pet tries to drink, they have difficulty breathing as well. This causes them to occasionally inhale small droplets, making them cough. 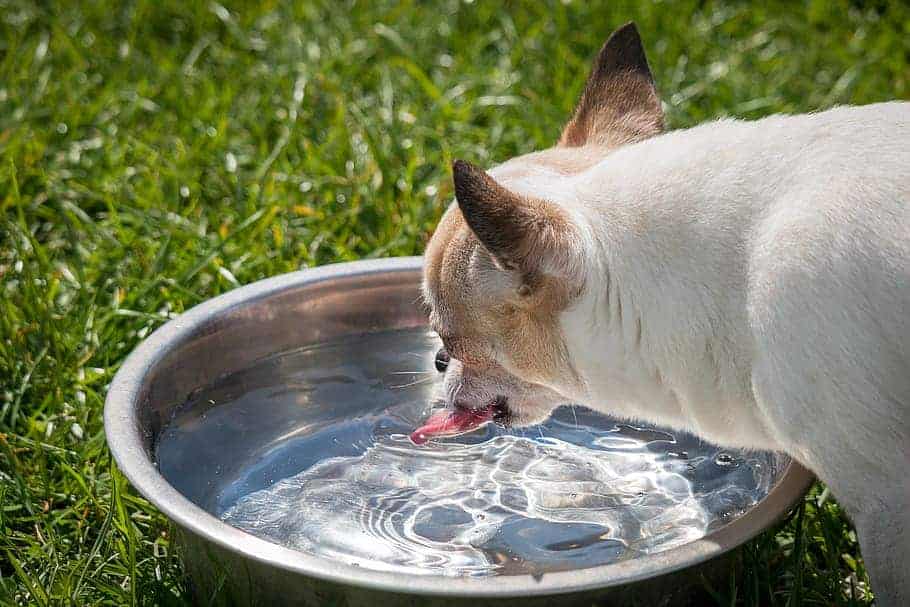 How Do You Treat Tracheal Collapse?

There are a few forms of treatment for tracheal collapse from medical management with cough suppressants like Guaifenesin and bronchodilators like Theophylline. It is also helpful if you can encourage weight loss and use a harness, not a collar, to minimize pulling on the throat.

In some cases, treating with an antibiotic and an anti-inflammatory may be necessary if a secondary infection is noticed.

Surgery – Is It Worth It?

Surgical management is very complex and should be performed by a board-certified veterinarian. A mesh is chosen and applied to the inner part of the trachea, holding it open in order to allow for proper airflow. Just like with any surgery, there is always the risk of life-threatening complications.

Even with surgery, it is very likely that the dog will still need to have cough suppressants and a change in diet and lifestyle afterward.

Is Kennel Cough the Reason My Dog Coughs After Drinking Water?

Kennel Cough is typically the second most common reason for a dog coughing after drinking water. This is a highly contagious, inflammatory condition of the upper respiratory tract. Kennel Cough is often contracted through a contaminated environment, such as the groomer or boarding facility, or by another infected dog. 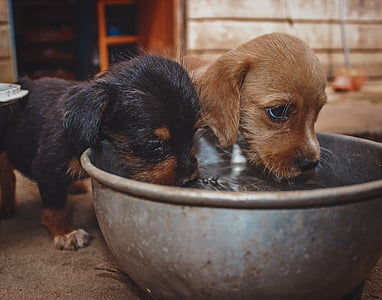 What Are the Symptoms Of Kennel Cough?

The symptoms associated with Kennel Cough are very similar to the signs of tracheal collapse. Except, often times the history of the pet and the breed can have a lot to do with the diagnosis. If Jack the Labradoodle was just at the groomer a week or two ago and is coughing now, it would be more likely that it is Kennel Cough over a collapsed trachea.

What Are the Risks Of Kennel Cough In My Dog?

Kennel Cough can cause pneumonia if it is left untreated. Death and severe illness have been seen when this condition has been ignored.

How Do I Treat Kennel Cough in My Dog?

Thankfully, antibiotics usually kick Kennel Coughs’ butt. Azithromycin and Clavamox are usually the weapons of choice when treating this irritating cough. They tend to resolve the issue within less than 14 days of administering.

Other Potential Reasons Why My Dog Coughs After Drinking Water?

There really is a list of possible explanations for coughing after drinking water. While collapsing trachea and Kennel Cough are the number one and two reasons, it is still possible that it could be something else ailing your pet. 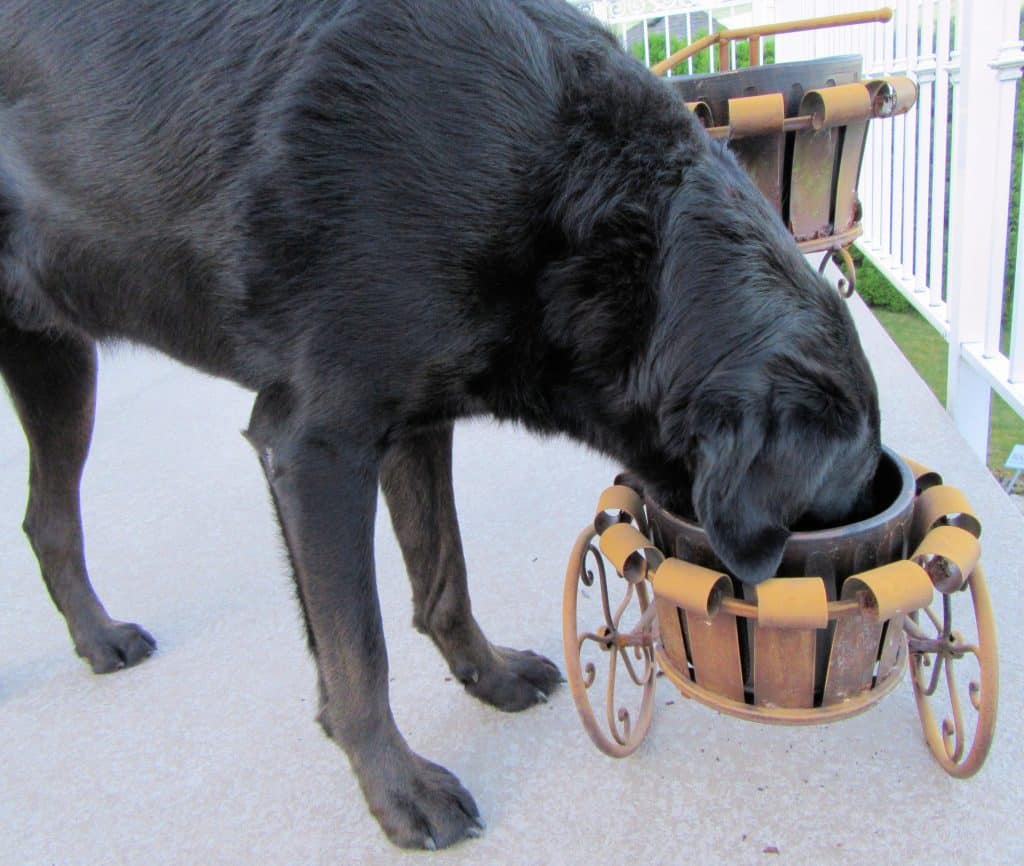 Coughing can most certainly be noted when the heart is not functioning at its full capacity. Typically a dog will start coughing from heart failure because there is either fluid build-up around or in the pericardial sac or some kind of heart enlargement that is applying pressure to the surrounding tracheal structures.

Symptoms can include but are not limited to persistent coughing, especially when getting up from rest or activity, lethargy, pale or poor gum color, inappetence and distended abdomen.

How Do I Treat Heart Failure?

Treatment of any kind of condition of the heart can be very tricky and delicate and depends entirely on what is causing the issue. Sometimes treating medically with diuretics can help but oftentimes this will still be the reason that the be passes away or is euthanized. It is important to confirm a diagnosis as serious as this one.

Performing an echocardiogram of the heart can help us better understand the causes of the dog’s heart issues and coughing, as there can be many ways that the heart fails.

Heartworm disease is an entirely preventable condition where a blood parasite called heartworms entire the bloodstream through a bite from an infected mosquito. From there the microfilaria (baby heartworms) migrate to the heart where they begin multiplying inside. Sounds creepy? That’s because it is!

Heartworm prevention is readily available online and at your veterinarian. They should be tested yearly for heartworm disease and be put on prevention as soon as possible to eliminate the possibility of your dog contracting this nasty parasite.

Many folks are familiar with HeartGard, Trifexis, Interceptor Plus and Proheart. These are all great products that will prevent your dog from heartworm disease and should be given under the instructions of your vet.

The treatment for heartworm disease is a complicated, risky and expensive one. It is far cheaper to have your pet on heartworm prevention for their whole life than it is to treat it one time. Typically treatment ranges depending on the size of the dog and the cost of medical care in your area.

It can be anywhere from as little as 1500$ to over 3000$ and takes at least 6 months to fully treat as you can only test for it again 6 months after treatment is finished.

Melarsomine is the drug that is used to kill the adult heartworms which are greatly affecting the integrity of the heart. Prior to treatment, they have to be on high doses of steroids and antibiotics for two months prior to their first melarsomine injection.

A dog coughing after drinking water may suffer severe allergies. The inflammation from the irritating pollen and airborne pathogens can cause a large amount of upper respiratory symptoms such as coughing, sneezing, running nose and eyes and general itchiness.

Yes, it is possible that your dog could just be affected by simple allergies and they are still coughing after immediately taking a drink. Sometimes this is just because of the way that your dog drinks, or because his esophagus and trachea are irritated from all the coughing he did.

Sometimes if the pet lives in a household with cigarette smokers, coughing can be seen due to allergic lung disease response to the smoke.

The diagnosis of lung cancer is one of the worst ones and typically indicates a poor prognosis. Once the pet begins showing signs of coughing and it is found through x-rays that they have lung cancer then planning for their goodbye is what is best for them.

Just like most things in this article, coughing is one of the first signs. Lethargy, weight loss and inappetence are also commonly seen in dogs that are suffering from this issue. Sometimes, the dog may even cough up bloody mucous.

Can I Treat Lung Cancer in My Dog?

It is extremely difficult to treat most types of lung cancers and is it unlikely that most therapies will be successful. Firstly, most lung cancer is derived by some type of metastasis (spread) from another organ or surrounding tissue, such as the liver, spleen or bone. Treatment can include surgical removal of a tumor or medications to reduce symptoms and improve quality of life.

In rare cases is your dog coughing after drinking water a sign of an actual problem. If your dog is young and healthy and otherwise doesn’t seem to be sick, then he probably just drank his water too fast. After all, I know that I have taken a sip of water the wrong way and choked myself.

Be sure to monitor your pet for any other symptoms of collapsing trachea and other causes of coughing. Always contact your veterinarian about any concerns you have with your pet and coughing as it can be an indication of something deeper.