While some animal lovers willingly take raccoons into their houses to turn them into pets, they are still wild animals. And no matter how adorable they might seem, these cunning creatures are perfectly capable of viciously attacking your four-legged friends.

In rare situations, raccoons can also kill dogs. Therefore, if you are thinking about bringing a raccoon home, it’s better to take your time and assess whether it’s a smart move for your canine or not.

This article will shed some light on why raccoons attack dogs, what makes these fights so dangerous, and how you can protect your snoopy from them. Stick around to find out!

Why do raccoons attack dogs?

Firstly, as a pet owner dealing with raccoons, you need to understand that these striped creatures never go out of their way to actively search for your dog to start a fight. Although raccoons do have a reputation of being vicious, they aren’t much of a fool to leave their territory and safety areas behind just to invade your dog’s house for the fun of it. They are way too smart for that. 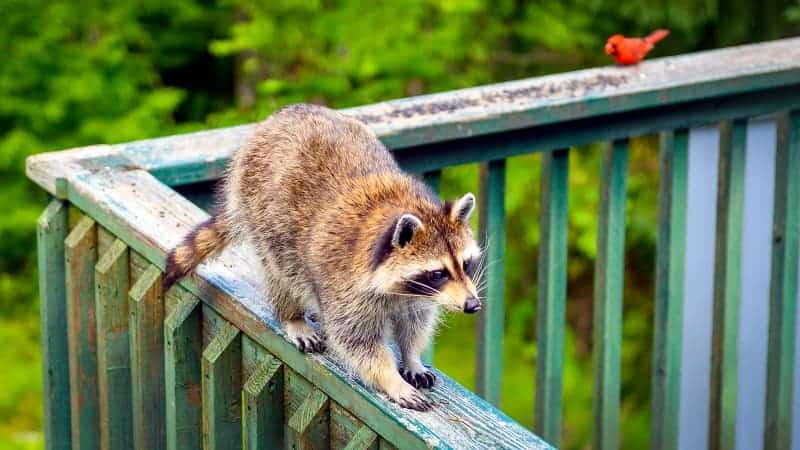 There is always another motive driving an attack against big animals such as your dogs. In fact, there are two fundamental reasons explaining why do raccoons attack dogs; food and self-preservation or safety.

Self-preservation is the primary force driving pretty much every living thing; the same goes for raccoons. So, when raccoons encounter large animals such as dogs, their first reaction is to get as far as possible. Though there is a possibility that raccoons may face off with your dog right at the spot, these stripey creatures are usually not the ones initiating the battle.

As long as there is a way to escape, raccoons will take their chances to back off, especially if the dog is huge. However, if the pooch is smaller or roughly equal in size, the coon may stand its ground. Still, everything depends on the factors and situation present.

Usually, raccoons attack dogs when they are really concerned. For instance, a raccoon may climb on your fence to get inside your property, and your dog notices. Recalling that canines are highly territorial, their natural reaction will be to run after the intruder and chase it away. Now suppose, during this chasing, your dog, somehow, was able to corner the raccoon in your backyard, and now the wild mammal has no chance to escape.

The fence is a little too high for the raccoon to climb, and there are no trees around. In such situations, raccoons need to defend themselves from upcoming dangers. It is entirely natural that, when concerned, animals take any necessary steps to save their lives and to create a chance for escape.

Another scenario in which raccoons may attack dogs is if our fluffy friends trespass into the wild mammal’s territory. If your dog unknowingly ventures into a raccoon’s territory who has young ones to protect, the coon may attack out of nowhere. 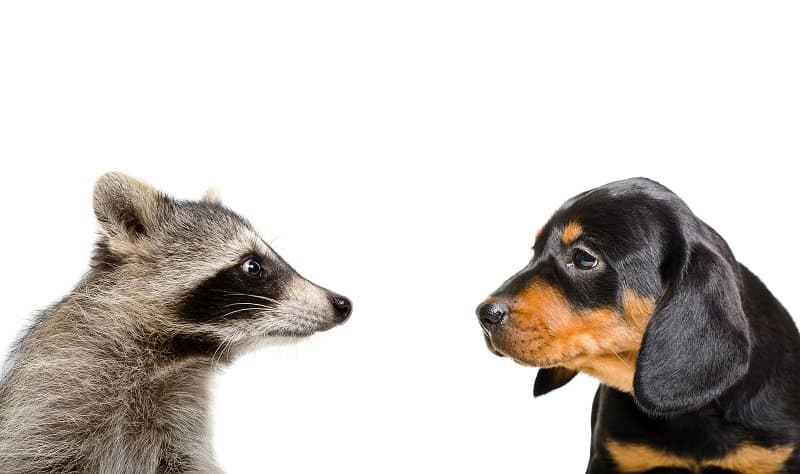 The third fundamental reason for which a coon might attack your pet is food. As stated earlier, raccoons are pretty cunning animals. They quickly learn and remember if there is food available in and around your property. Dog food left outside is also an invitation to these predators, which often puts them in conflict with your canines.

Well, the simple answer to this question is a definite yes.

Raccoons are dangerous for some pretty obvious reasons. First, you need to be aware that these harmless-looking animals have pretty strong teeth and razor-sharp claws that they don’t hesitate to use against animals like cats and dogs. Raccoons are wild predators that don’t necessarily feel any kind of guilt in disemboweling small animals.

Even many larger breed dogs have been severely injured by these ‘sweet and fluffy’ creatures.

As raccoons are clever, they go for the canine’s eyes, understanding that if the dog has impaired vision, tearing it into a thousand pieces is a whole lot easier. When these predators succeed with the first part, they try to roll their victim (and your dog) on its back to attack the belly.

That’s the part where they use their sharp claws to disembowel the canine with one swift motion. If things don’t work this way, the savages continue scratching and biting the poor little pup. 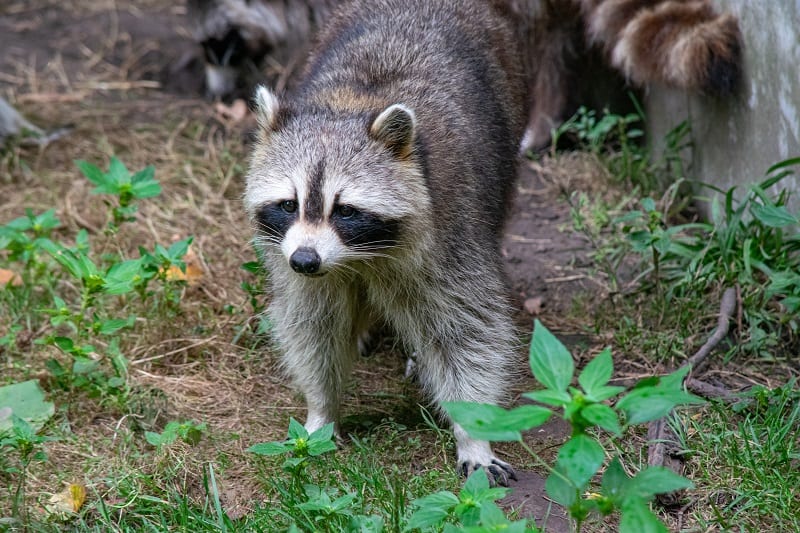 This whole experience is pretty devastating, but what’s astonishing about raccoons is that how quickly they move. Their reflexes are phenomenal; that’s why it is nearly impossible for even the most skilled canines to catch up with raccoons in terms of slashing abilities.

If a coon happens to go for a canine’s chest, there is a chance that he will puncture the lungs to make it collapse so that the dog cannot breathe anymore. If raccoons go for the abdomen, they can pierce the intestine in a flash, splashing all of its content in the abdomen, leading to septic peritonitis.

Sometimes coons go for the pelvis intending to slash the canine’s urethra, leading to urine accumulation and kidney failure. 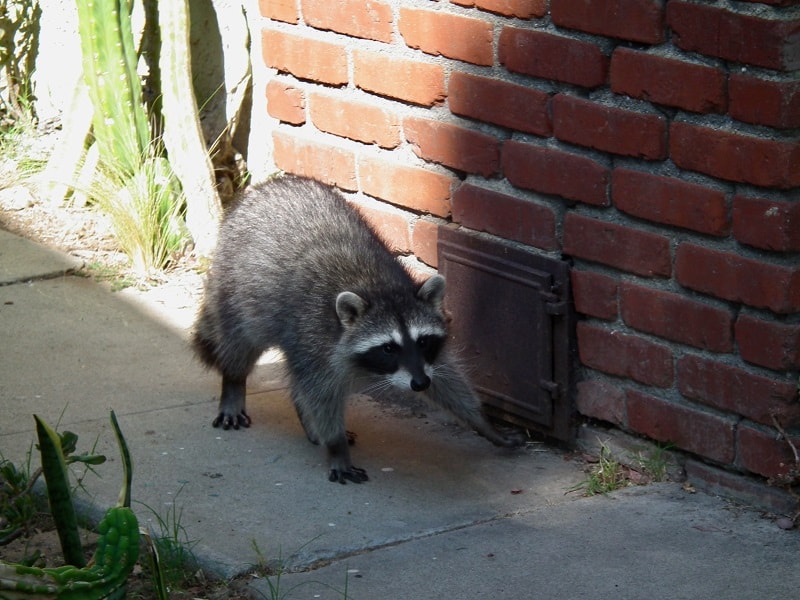 It may seem unrealistic, but raccoons have been noticed to lure canines into the water for drowning purposes. While some people believe that these are just rumors and raccoons don’t fundamentally plan on killing anything by drowning, others are sure that they have witnessed these animals in action.

According to the witnesses, raccoons pretend to be cornered and trapped before they head towards the water. Dogs, out of their hunting nature, follow the raccoons in the water. But as soon as the canine gets in, raccoons climb on their victim’s head and try to push him underwater.

Other than the numerous injuries our beloved canines can sustain in going face-to-face with a raccoon, they are also exposed to other health concerns, including mite, tick, and flea infestation. Raccoons, being wild animals, may also carry some severe diseases such as leptospirosis and rabies.

Are dogs afraid of raccoons?

Generally, canines aren’t afraid of raccoons. This is especially true for well-trained hunting dogs. On the other side, Cats will try their best to avoid any encounter with these masked creatures.

Dogs are curious by nature, so they usually don’t back down. They will definitely try to investigate what this creature is.

Plus, canines are incredibly territorial and have an innate sense of responsibility to protect their human pack, territories, food, and water resources.

However, it is vital to understand that not every pup willingly engages with a raccoon. There may be some canines who have already encountered a raccoon in their past and know how it feels to be attacked by a raccoon. In such situations, your dog will try to avoid getting in a conflict.

How to protect a dog from raccoons?

Whether you have a hound or a lap dog in your house, it is your responsibility to protect your loyal companion from raccoon attacks at all costs. Even if your pet doesn’t get wounded for battling a wild animal, there are some other ways in which raccoons can bring harm not only to your canine but also to the other family members. 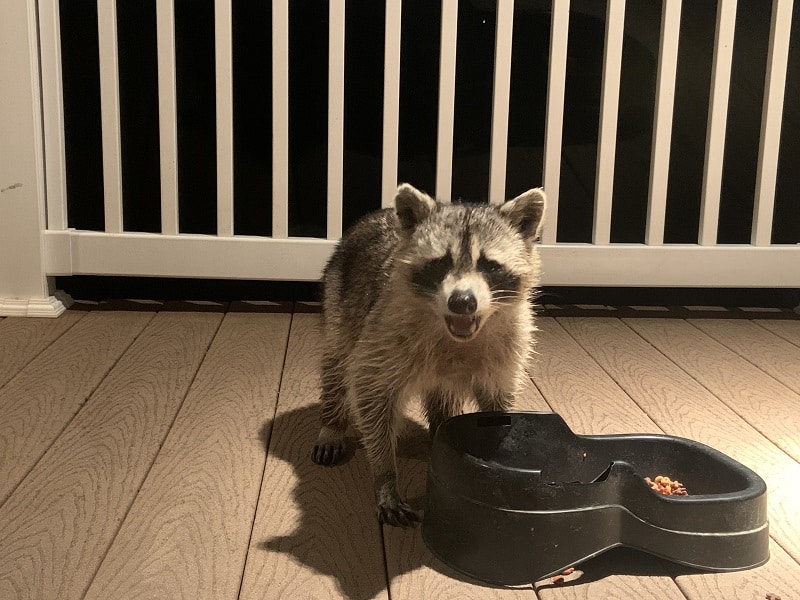 Securing your property is the first thing you can do to protect your dog from these wild creatures. For that reason, if you have a fence around your property, make sure it has no holes that can be used by the raccoons to come in.

The use of traditional bars may also be futile as raccoons know how to climb. Instead, installing electrical fences is an astute move.

Plus, if you have any trees looming over your property, try to trim the extra branches down, as raccoons can use these to gain access.

Some raccoons are bold, but their majority tries to avoid human encounters. Therefore, it is recommended not to leave your dog outside alone. Dog owners can also opt for floodlights and loud noises to scare these creatures away.

Finally, make sure you are not leaving any food outside. Raccoons don’t visit you to pick on your pets. Instead, it is the food that works as a magnet for these animals to invade your home.

Raccoons may have an innocent-looking personality, but don’t let their adorable look fool you. These stripey animals are clearly vicious and can easily square off your pets. If you ever encounter a raccoon while walking your dog, hold the leash and back off slowly.

Do not approach the coon, and don’t let the wild creature feel threatened. Though, they aren’t necessarily on the hunt for canines.

Do Raccoons Attack Dogs? Remember that whenever there is a face-off between raccoons and dogs, coons rarely lose a fight.