The dog is a social being, who cannot live alone and who must therefore communicate with those around him. Let’s discuss how do dogs talk to each other and with humans as well.

Communication between dogs and humans plays a fundamental role in the harmony or disharmony of their common social system. Man interprets (innately and culturally) the signals emitted by the animal But, how many times would you have wished you could “speak” with your canine companion in order to understand him better? Unfortunately for us, our dogs don’t speak our language.

So what do we mean when we refer to dog language? What is that? Canine language is the set of visual signals and facial expressions, sometimes subtle, that dogs use to express their emotions. Canine language can be deciphered and understood by observing the positions and movements of different parts of their body, from the tail to the ears. 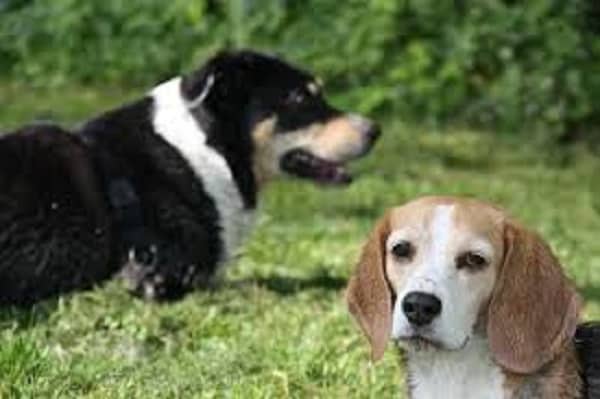 Do dogs talk to each other? 4 ways of communicating

Dogs communicate their state of mind and their emotions in 4 different ways: visual, vocal, auditory and olfactory.

Dogs communicate visually, by expressing themselves with non-verbal body language such as different postures and tone in their ears, eyes, mouth, tail, movements, etc. It is the most widely used type of communication in dogs, but not necessarily the most easily understood by humans. For example, we are all able to recognize the emotion of a person who is angry just by observing it from a reasonable distance. His eyebrows will be more furrowed, his gaze will be more piercing, his body will be tense, his movements will be more jerky, etc. The same principle applies in dogs, that is to say that it is possible for us to detect its state of mind, its emotion, by observing it. The whole body of the dog participates in the communication process.

They will help you describe the dog’s attitude, either a high posture for confidence or anger, a low posture for fear, doubt or appeasement and a mixture of the two. 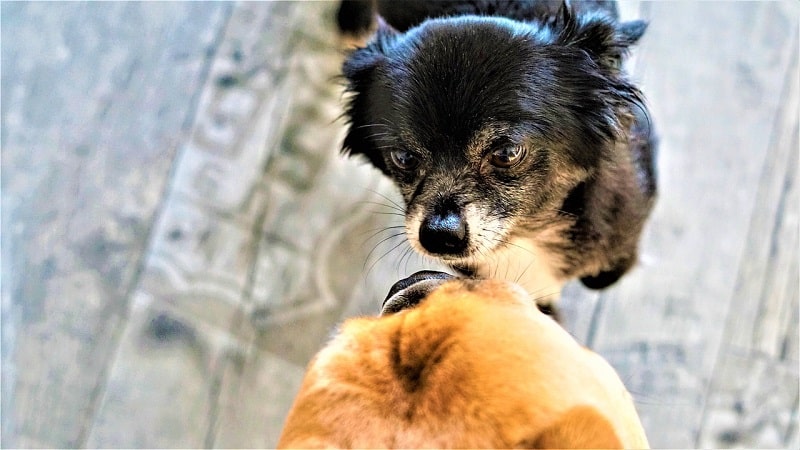 In a high posture, the dog usually has erect ears and tail, and his body appears larger. On the contrary, in a low posture the dog has rather the tail and the low ears and his body seems to want to make itself very small and sagging.

These are movements of intention, that is to say incomplete, simplified, exaggerated and theatrical. For example, a dog that threatens another has its mouth open, its lips rolled up revealing the canines and will stare at its opponent, all in an exaggerated way. On the contrary, a dog wanting to avoid conflict looks away, generally does not show its teeth and does not have tensions or folds in the face.

Do dogs talk to each other? Movements and micromovements

When we look at how to dogs talk to each other, we must consider movements in the tail, ears, eyes and tongue for example. We also talk about signs of appeasement or discomfort. These signals are mainly used to get distance between him and others. For example, a dog might show signs of appeasement when a person or canine congener. He gets on top of it, looks at him directly for a long time, appears aggressive and tense, adopts a direct approach (provocative approach), looks for confrontation, etc.

A dog can just as easily bring his ears forward when he is attentive, and after earing a noise for example, but it can also be a sign of self confidence, frustration or anger. On the contrary, low ears, contiguous to the skull, rather announce fear. 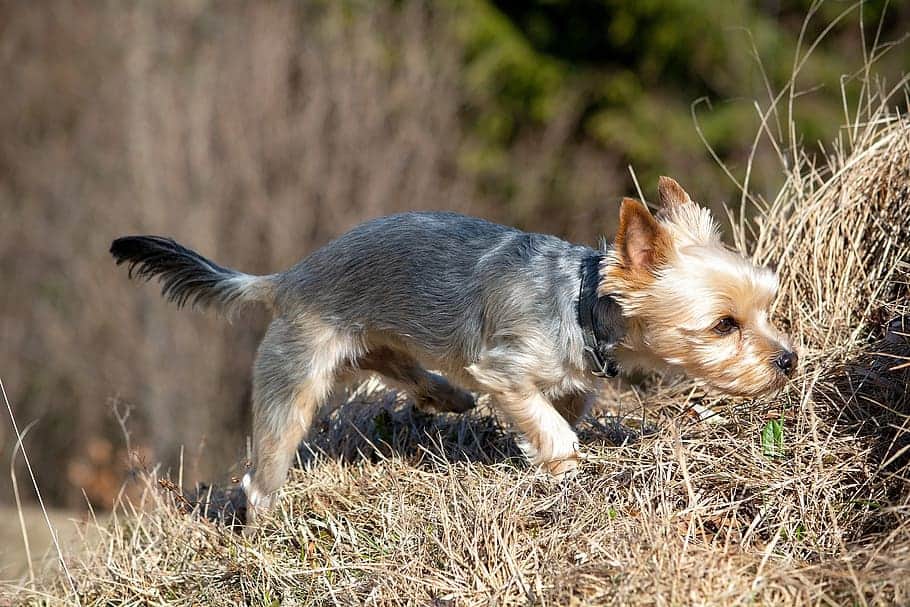 A relaxed and cheerful dog flaps its tail sideways and flexibly. The faster the tail beats, the more excited the dog is. The higher it is, the more confident the dog is. A dog’s tail that is high and stiff, however, may indicate an intention to attack (frustration and/or anger). Some dogs flap their tails just before attacking a human or another dog. However, this tail should be stiff and jerky, and the dog’s whole body should also tell us that he is going to be aggressive. A dog with its tail between its legs indicates fear and is usually accompanied by other signals.

Of course here we are referring to barking, moaning, growling and howling. Some dogs use it more than others. For example, huskies or sheepdogs are usually very vocal to express happiness, excitement or fear. They bark and scream in order to communicate their emotional state. This type of communication is generally not well received by humans. However, it is normal behavior that we should try to listen and understand when it happens.

Vocal communication usually supports body postures and give them more meaning. These two types of communication are mutually reinforcing each other in order to clarify the communication. For example, a dog in a high position with curled lips, in anger or frustration, utters low vocalizations in order to intimidate. If the second dog is intimidated, he opts for a low position sometimes accompanied by moans that are higher than lower.

Third, dogs communicate through their audible senses, which are 4 to 5 times better than humans. It allows them to hear noises that are imperceptible to us (ultrasound – 50,000 Hz). The dog therefore picks up information on the emotional state of another dog using the different tones of barks, growls or howls. When one dog wants to be soothing to another, he chooses high-pitched sounds, unlike a dog wanting to impose itself, which will be with low vocalizations. For example, a distinction is made between playing grunts, which are higher-pitched, versus warning grunts, which are more severe. The same principle applies to the way we talk to our animal. 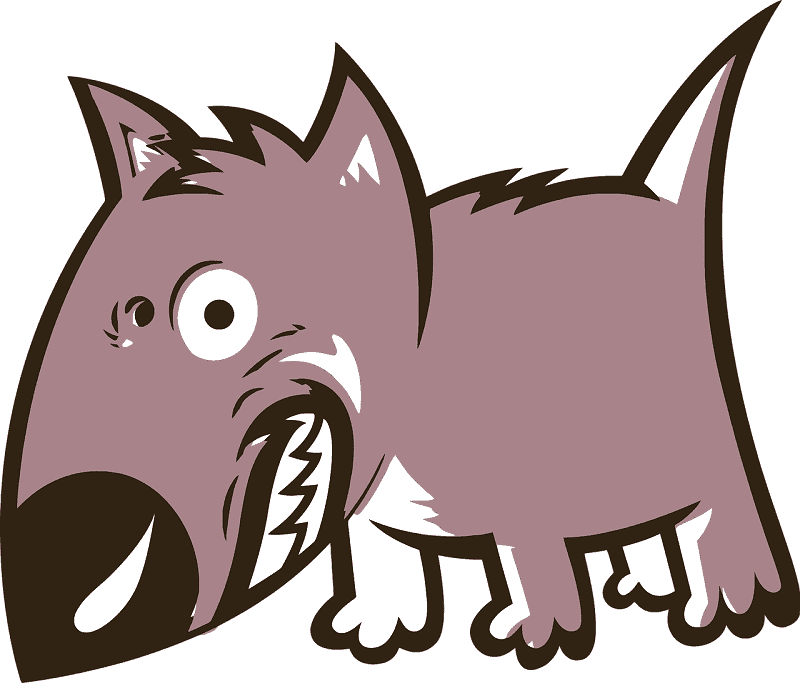 Everyone recognizes this difference in tones (except deaf dogs), however some dogs become more nervous or anxious than others when they hear low sounds. For example, a dog becomes very fearful following threats from his master while another might not care.

Finally, dogs communicate with their olfactory senses mainly between them, but also with humans. Knowing that a dog’s sense of smell is 200 to 10,000 times more powerful than humans, it allows them to easily gather information from another dog. That’s why it’s important to let your dog sniff the ground on his daily walks or at the dog park. Not only does this allow him to explore his surroundings, but it also stimulates him mentally. Be aware that mental stimulation is almost as important as physical activity.

Dogs give off and release hormones and pheromones, which are noticeable only amongst each other. This is one of the common reasons some dogs get stressed as soon as they walk through the door of a veterinary clinic, even though they’ve never been there before. Pheromones related to fear or stress were left behind by another dog and are still present. 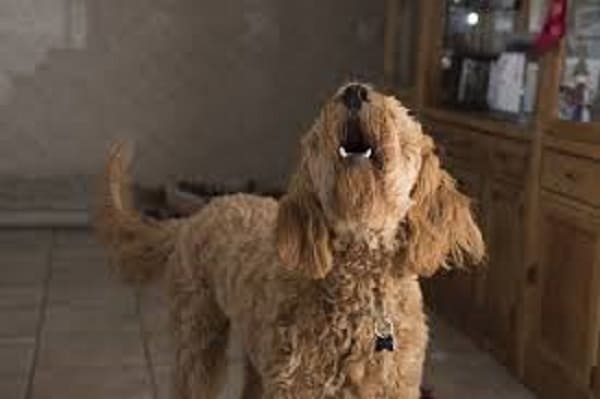 Do dogs talk to each other? While we know it is the case, it is not always easy to understand and interpret dog language. Everything has to be considered in the entire body. That is to say, we must look at the posture and tone of the dog, his eyes, his mouth, his ears, his tail, his hair … without forgetting to pay attention to his discomfort and stress signals.

Also, the body and morphology of some dogs complicate our ability to appropriately understand their communication process. It is more difficult to perceive muscle tension in the face on dogs with a flattened muzzle, or even under a long, curly dress. On the other hand, dogs with hair in front of their eyes do not necessarily see well. They can therefore tend to be quicker and more responsive as they are less aware of their surroundings. Other dogs will also have a harder time seeing their facial expressions.

It is also difficult to express yourself when you have no more ears or tail. This is why a dog’s ears and tail should never be cut off. These are are less well understood by others, both canines and humans. Have you ever seen a doberman with the tail and ears intact? It seems a lot less intimidating. And yet, it’s the same dog. Think about it! 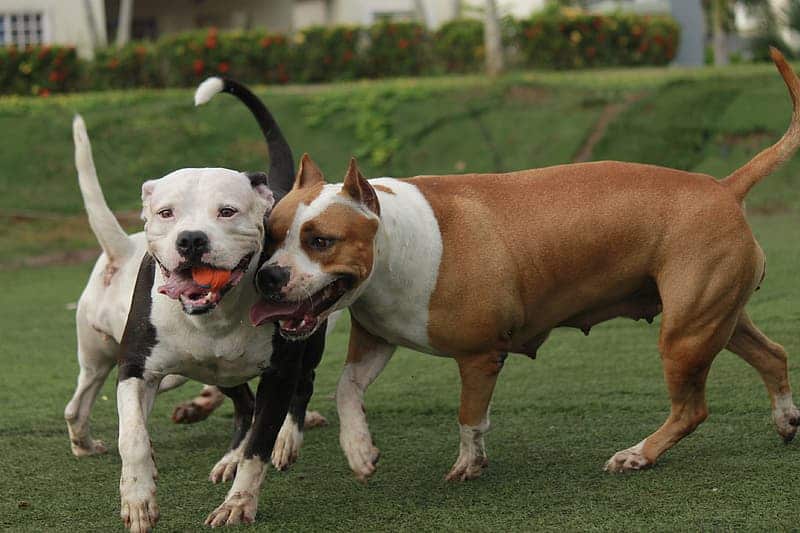 We can also observe limitations in how do dogs talk to each other when they have been poorly socialized. Dogs who have been around other dogs quickly and on a regular basis during their socialization period have an easier time reading and communicating with others. On the other hand, dogs who have been around other dogs infrequently may not understand the intricacies of dog language as well. All dogs can communicate, however some can communicate better than others as they have practiced and improved their technique.

Finally, a dog’s ability to communicate can be impaired if their signals of discomfort, stress and anxiety are turned down. Be careful not to punish your dog for communicating well! If you punish your dog for growling when placed in an uncomfortable situation, he may decide to used another way to communicate his warning signal as the last one was not understood or recognized. Unfortunately, this may result in more aggressive behavior.

Therefore, if your dog reacts by yapping (fear / intimidation / frustration / excitement) at the sight of another dog, the ideal solution is not to negate his reaction but rather try to change redirect his emotion by drawing his attention with a treat or his favorite toy to distract him. If your dog growls at your approach when he eats his bone, walk away, say “thank you for communicating” and ask him to come back to you in a positive state of mind!