Why are these Chihuahuas Growling so much! It might seem tough, being the smallest guy around.

Does it seem like your Chihuahua is more aggressive than other dogs in the neighborhood? Why exactly does your little guy growl so much? Is your dog growling becoming a problem?

Your adorable little Chihuahua is actually named after the Mexican state of Chihuahua, with its capital Chihuahua City. Chihuahuas were bred for many years as fantastic human companions and loving, social pets!

Experts think the breed descended from a similarly small-sized dog bred by the Mexican Toltec peoples, called the Techichi, stretching as far back as the ninth century A.D. These now extinct Techichi likely descended from dogs that have roots landing in Asia.

While these little dogs were bred for human companionship, like so many other small breeds around the world, they can be reserved toward other animals and strange people. That is assuming they aren’t socialized at a young age.

They weren’t bred specifically to be aggressive with other animals. Even larger rodents could pose a threat to these tiny guys. They certainly weren’t bred for any kind of protection work.

So, what reason do they have to be naturally aggressive at all? 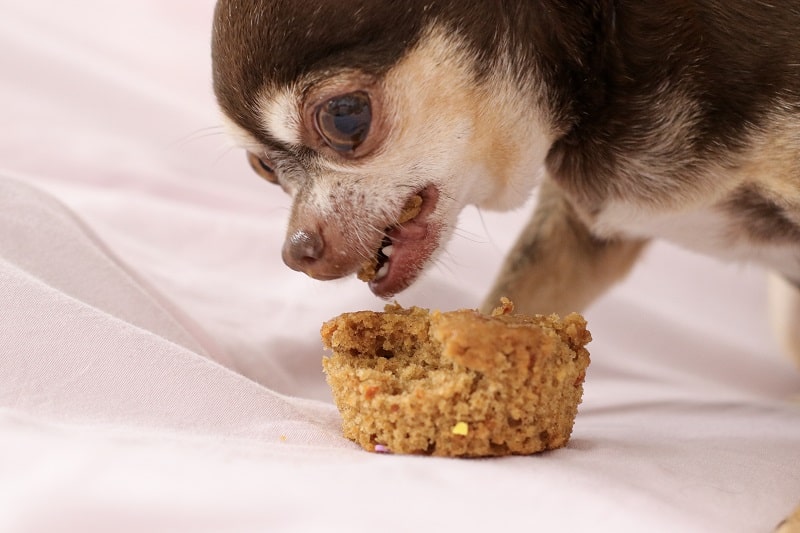 A roommate’s girlfriend moved in with us many years ago, bringing her son and tiny 10-pound adult Chihuahua, Melvin, with her. This was back in my early 20’s.

For perhaps the first week and a half, Melvin would quickly scutter in some corner of the house every time I approached or utter a consistent stream of growls and yips when he wasn’t able to.

Eventually, I began desensitizing and counterconditioning him to my presence, using treat rewards. At that point, he warmed up and we became best friends!

I would never have had to devote much effort at all had Melvin not been so antisocial. Dogs are a naturally social species, and friendship should have developed the very first time we met.

Chihuahuas Growling: Melvin and Other Dogs

It was clear his handler had never bothered to socialize him with other people. Melvin was pretty unfriendly with other animals, also.

His owner would frequently let him outside to potty off-leash (which isn’t a good practice without a fence or other barrier). After all, Melvin was so small, and couldn’t run very fast. 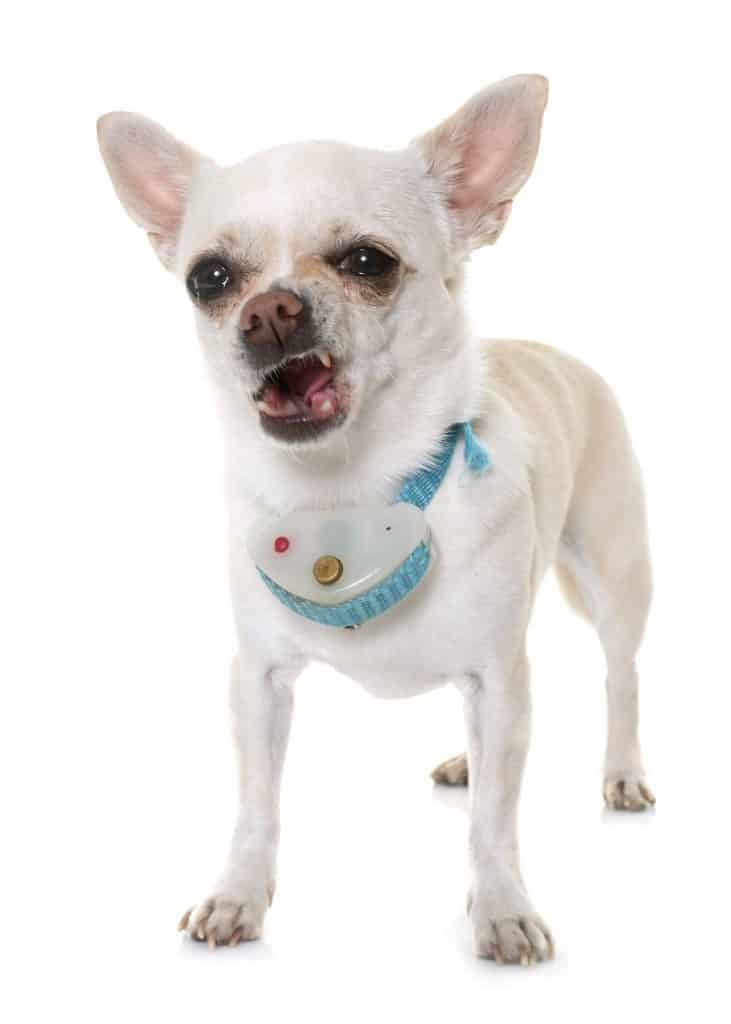 Whenever Melvin happened to see another dog being walked nearby, or any stranger simply walking, he would rush up to face it, uttering a constant stream of angry barks. It didn’t matter if the dog was 10 times Melvin’s size!

Thankfully, other owners always did have their dogs leashed. He wouldn’t have lasted but a split second or so had confrontations ever escalated.

Melvin and The New Beagle

Several years ago, I had brought an 8-week-old Beagle rescue home. He was about the size of a cup holder, much similar to Melvin’s size, though he grew up quickly.

Knowing how important social experiences were for any puppy, especially at a very young age, I was worried. I’ve always exercised great care when socializing my puppies, but they were never forced to grow up around angry little dogs.

Melvin wasn’t nice, to say the least. I was terrified he would ruin my efforts with Volly! He never actually bit my puppy but was constantly threatening.

In the end, I always incorporated enthusiastic praise, play, treats and other rewards every time Melvin was around. Even though Melvin wasn’t ever anything but aggressive, Volly would just think he was playing!

What She Did Wrong, and How to Avoid It

Melvin was never socialized. His handler clearly never devoted any kind of effort in that part of his development. Either this or he was traumatized as a young puppy and no effort was ever devoted to treating that trauma.

Had she simply spent the tiniest bit of effort introducing Melvin to other dogs and people when he was a young puppy, teaching him that social encounters are rewarding, he wouldn’t have grown so aggressively antisocial and constantly anxious. 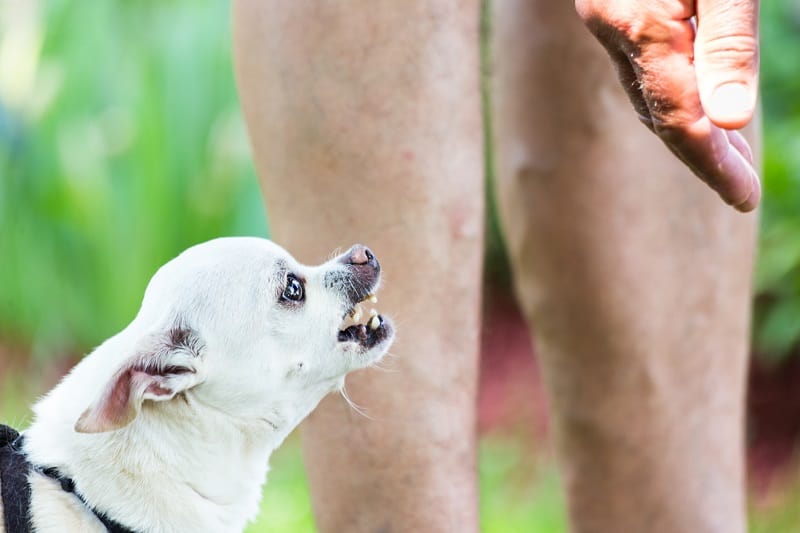 What is Small Dog Syndrome?

You might have heard this called a Napoleon Complex, and it refers to small dogs who misbehave or behave aggressively. These are the ”‘ankle biters” of the world!

These types of behavior are all too often ignored by owners (perfectly true in Melvin’s case). Owners of “ankle biters” rarely put any effort into correcting them, which is one reason why they persist. These are behaviors that wouldn’t be tolerated in larger breeds, easily sending a seventy-pound dog to the shelter.

Can you imagine what would happen if a 100 lb. English Labrador, or a Pit-Bull of any size, were to run upon a child and begin viciously barking his head off? It would be terrifying! Any mother would be furious such a dog was allowed to roam untethered.

Yet this behavior is easy to imagine with any Chihuahua, or at least the stereotypical Chihuahua. Most of us have heard stories of small dogs acting out like this.

Why is it forbidden if a human-sized dog acts this way, but accepted if a small or toy breed does?

The small dog probably won’t send you to the hospital if he or she bites you, and nothing weighing 6-10 lbs. is very frightening.

The Wrong Kind of Correction

Melvin’s case is a perfect one to examine because his handler did almost everything you could do, the wrong way, short of physically abusing him.

She would scream at him when he ran out to threaten any passing stranger or animal, which never accomplished anything other than encouraging his anxiety.

In Melvin the Chihuahua’s mind, her screaming probably meant this new threat was making his handler just as uncomfortable. He wouldn’t have understood the screaming was directed toward him personally.

If you need to correct your Chihuahua, be very careful not to scream or shout. This often makes our dogs feel more anxious. Calm corrections and rewarding methods of reinforcement are much more effective.

“For most behavior problems, especially those associated with fear or anxiety, the use of punishment is contraindicated since, even if it suppresses the undesirable behavior, it may further aggravate the pet’s fear and anxiety without teaching your pet anything new” (Horwitz, Debra. DVM). – Introduction to Desensitization and Counterconditioning

All dogs of any size should be vaccinated! Puppy vaccinations are especially important because puppies, like toddlers, are extremely vulnerable. A bad flea infestation could be deadly to such a vulnerable animal. 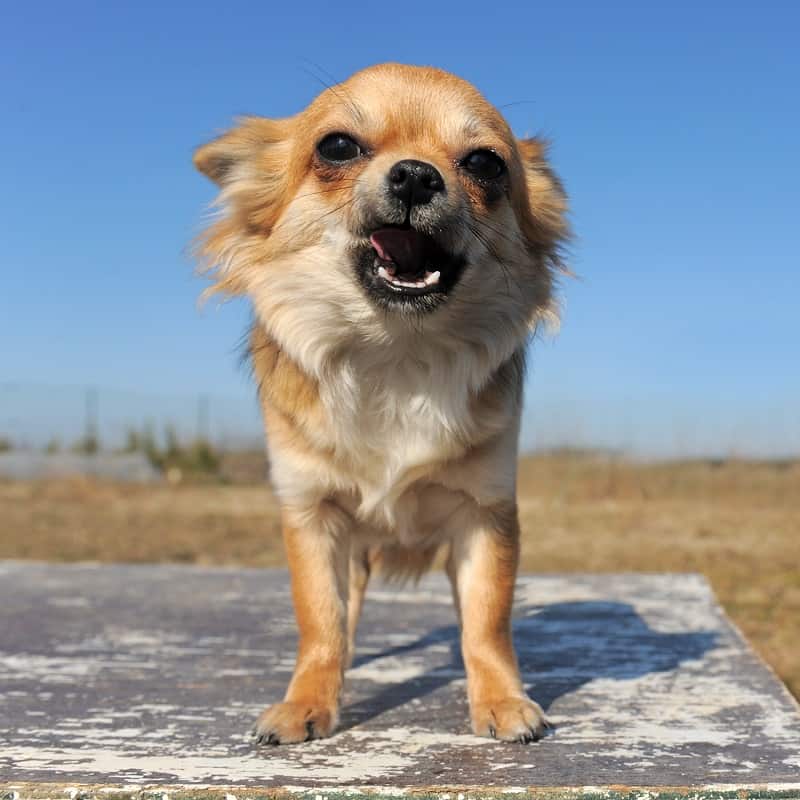 Parvo kills countless puppies every year and is nearly always fatal to young pups if untreated.

Rabies vaccinations are legally mandated in most states across the U.S. In many established countries of the world, Rabies has been all but eradicated. So why is it the only Vaccine all U.S. dogs must get?

Rabies Vaccinations are legally mandated because it is arguably the deadliest virus known to man and is nearly always lethal once contracted. Animals testing positive are automatically euthanized, so feared is this virus.

Why Do Dogs Growl

Growling is a form of communication for our dogs, as you’ve probably guessed. Dogs can’t speak our languages, and if your Chihuahua is growling you may have either missed or ignored any visual cues.

Chihuahuas growling is an expression that they are uncomfortable or unhappy. But why is our dog unhappy in the first place? What is making him or her feel unhappy?

Fear-based anxiety can cause our dogs to growl. Imagine a dog afraid of strangers. This dog begins growling as strangers approach. This is the dog’s way of saying “You’re making me feel uncomfortable. Back off!”

How would you avoid this situation? Socialize your dog with strangers while he is a puppy! Socialization is extremely important to a dog’s psychological development and would help you avoid several issues in addition to growling.

Sadly, many dog owners fail to ever socialize their dogs, then wonder why their dogs are acting fearful or aggressive around strangers. This isn’t any different with Chihuahuas, or any other dog breed.

All domesticated dog breeds have inherited this instinct from their ancestors, who had to often either guard or bury their food so other predators didn’t steal it. The key is not to simply take away food while your dog is eating or take away toys while your dog is playing.

If you get into the habit of doing this, your dog could become possessive, to the point of biting owners. Other dogs simply issue that growl as a warning sign.

Thankfully, resource guarding is very easy to treat! You’ll simply need to make a trade. Offer your dog something more valuable, like a tasty or rare treat, if you must approach his food bowl when he is eating. Eventually, the dog won’t fear your approach because he relates it to the treats.

Sometimes a dog will growl when he feels the need to defend his territory from a potential “threat”. Imagine a mailman approaching from the road. This could even be another dog. How does your own dog respond?

Delivery people will often carry treats for this very reason! 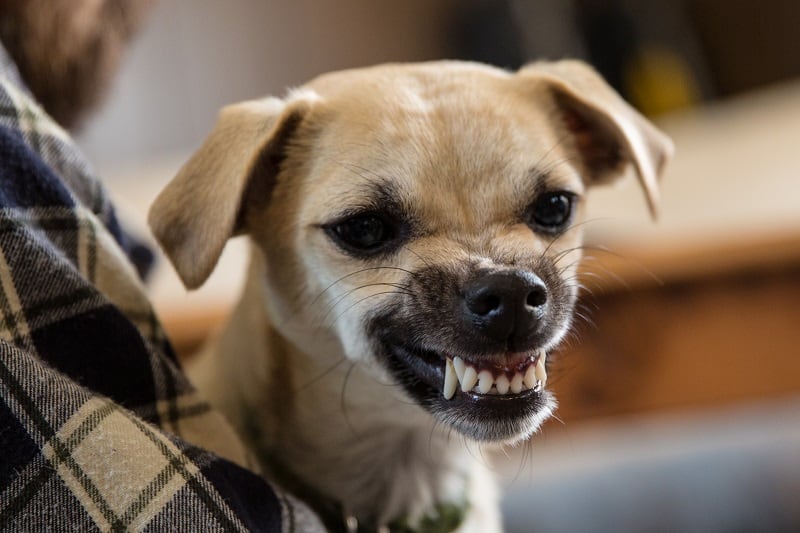 Injured dogs will often growl out of a defensive instinct. Your Chihuahua might be saying “I’m injured, in pain, and afraid. Stop hurting me!” In other words, your pup is telling you to back off.

Are Chihuahuas growling every time someone tries to pet them, or even just come near, and you aren’t sure why this is happening?

If you can’t explain a strange dog behavior, your next course of action should involve ruling out medical causes. Schedule a veterinary examination!

If your usually well behaved, social dog is growling or unusually aggressive, it’s very important you consult a veterinarian to identify any health issues!

Why are Chihuahuas Growling More than Other Dogs?

If you actually think about it, Chihuahuas seem like they might be more aggressive, on average, than other breeds. When most people use the expression “ankle biters”, Chihuahuas probably come to mind. There are a couple of different theories for this.

We have a very sad and dire animal overpopulation problem in America. Hundreds of thousands of dogs are euthanized annually. Most of these dogs are totally healthy and many are well behaved.

There are simply too many dogs bred each year, and not enough resources to care for each one. Chihuahuas are a popular breed and there is money to be made by breeding them.

A problem exists when amateur breeders skimp on breeding costs, such as not genetically testing the dam and sire or breeding just any male and female, instead of strictly well behaved, healthy and sociable dogs.

Many Chihuahuas genetically prone to aggression could usually turn out to be wonderfully well-behaved dogs if they were socialized well as puppies.

Teach these puppies that other dogs, strangers and other animals mean great things and are fun to be around, while they are young!

If you’ve done that with your Chihuahua (or any breed) successfully at an early age, he won’t have any reason to become aggressive as he grows older. Your Chihuahua would know he has more to gain by being friendly.

There is one huge problem. Many Chihuahua owners simply never socialize their puppies. They might think “He will only ever weigh 15 pounds. Why should I bother?”

Because the breed is so small and delicate, many owners don’t want to take them outside or around other animals. This makes sense from a safety perspective, but you can’t socialize if your dog is confined to the house his entire life.

69.6% of Chihuahuas tested with the American Temperament Test Society passed, as one of the lowest scores of all breeds tested.