Can You Get Roundworms from Your Dog Licking You? The answer here is yes, though it is unlikely you’ll get roundworms in this way.

There are other, more likely ways a human could contract roundworms. Let us explain below!

Can You Get Roundworms from Your Dog Licking You? What Are They?

Roundworms are one of several possible intestinal parasites that could be living in your dog’s intestines. They feed on partially digested foods your dog consumes and get their names from their round shape.

Roundworms aren’t the only gastrointestinal worm that can be found in your dog, but they are the most common!

Infected animals will shed roundworm eggs in their feces. Dogs can contract roundworms by licking or eating infected feces with roundworm eggs.

Roundworms are much larger than some other intestinal parasites and easily visible to a human! These look a bit like noodles of spaghetti. Believe it or not, these nasty parasites can grow up to 13 inches long! Adult roundworms are usually between 4-6 inches in length though.

These are white worms and can be seen in both human and dog waste. These parasites can even be vomited by an animal. 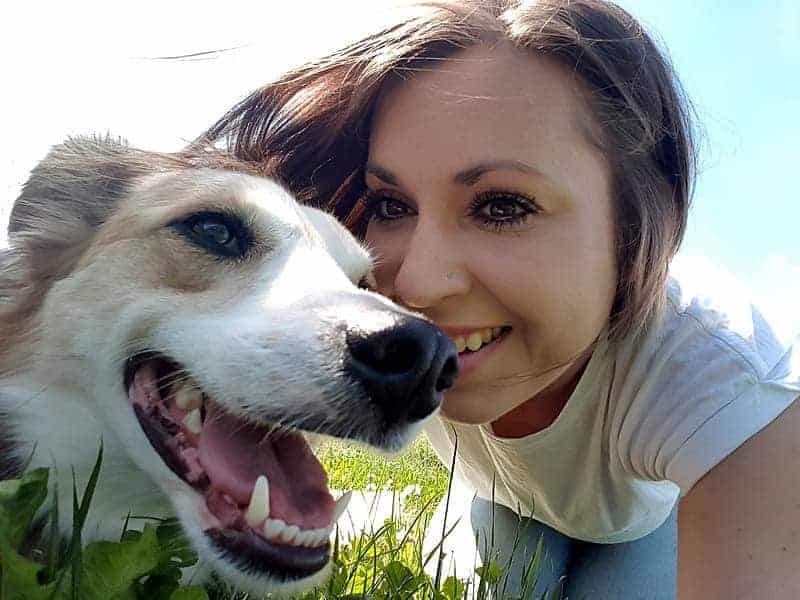 Are Roundworms Dangerous to Dogs?

Roundworms are most dangerous to small, developing puppies. Because they eat off of partially digested foods, they can steal nutrients from your growing puppy! The most common harmful side effect is a reduction in growth.

This can lead to growth defects that result from malnourishment.

When it comes to parasitic organisms, there are far worse parasites than roundworms! Still, you don’t want your pup becoming infected at all.

As far as dangers, there are dangers in malnourishment. Developing puppies need all the nutrients they can get! You can’t afford to have a parasite stealing those nutrients away. This (along with other parasites) is one reason it is so important to properly deworm your puppy!

Can You Get Roundworms from Your Dog Licking You?

The answer here is probably not. Chances you can get roundworms from your dog licking you are low. First, your dog either needs to be infected or have just recently licked/eaten feces with infectious eggs. After the dog licks up the roundworm eggs, they still need to be present on the tongue when your dog licks you. 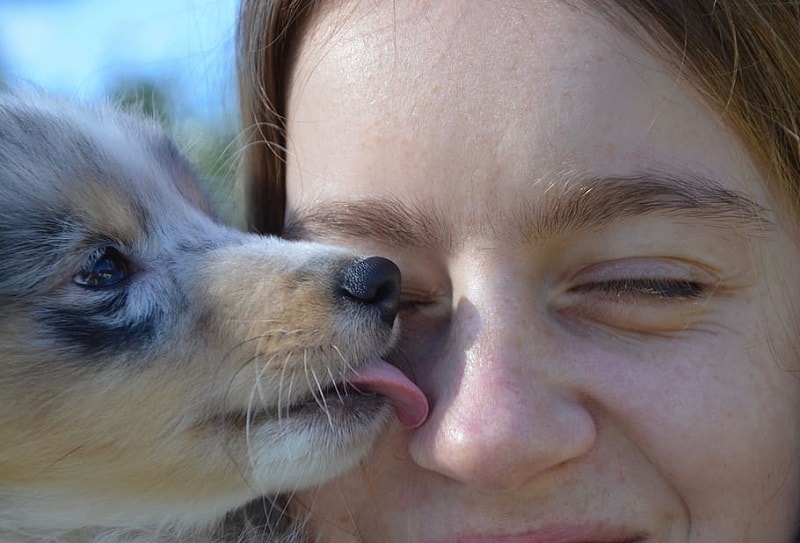 If this weren’t enough, the dog can’t simply lick you. The contents of that egg-filled slippery dog drool need to wind up inside your GI tract, meaning you’ll have to swallow it. Your dog will have to lick the inside of your mouth or face.

Unfortunately, this can indeed happen to children who make a habit of kissing their dogs!

There is almost no chance of this happening in another way unless the eggs wind up on your hands, and your hands touch food. So, you’re probably not going to get roundworms from your dog licking you, even if he/she is infected.

The dog would have had to have eaten contaminated feces within a certain amount of time, then lick your face or the inside of your mouth.

It’s more likely this would happen to a child, though chances are still pretty low! Children don’t often think there is anything wrong with kissing their beloved pets. 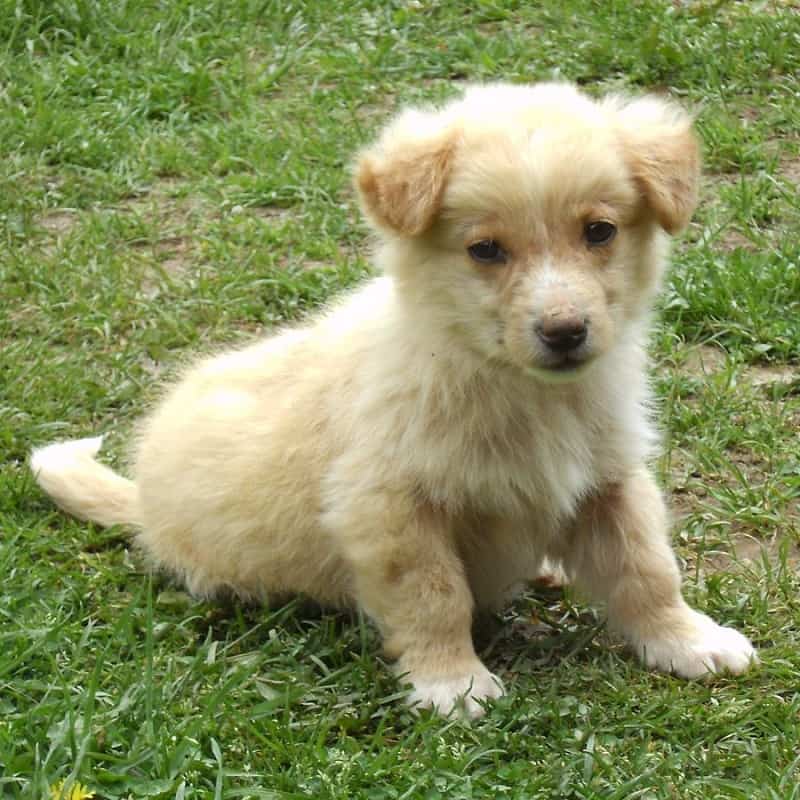 How Humans Can Get Roundworms

In the United States, as well as several other developed countries, water is treated with chemicals in order to kill off any contaminants. If you live in one of those countries that don’t treat the water, you could literally be drinking microscopic bits of fecal matter.

This includes any microscopic invader or parasitic organism (eggs in this case) in that untreated water.

Basically, the human has to either ingest something that has come in contact with infected animal faeces or contaminated soil.

Depending on the type, some roundworms can get in through our skin.

From Hands to Mouth

Either roundworm eggs or larvae can live in the soil. Let’s say your hands get soil with contaminated eggs on them. Maybe you are a child playing in the dirt, or you are working in your garden outdoors.

Now those roundworm eggs are on your hands! You would be surprised how often we touch our faces or the food we eat without thinking about it, much less washing our hands beforehand. 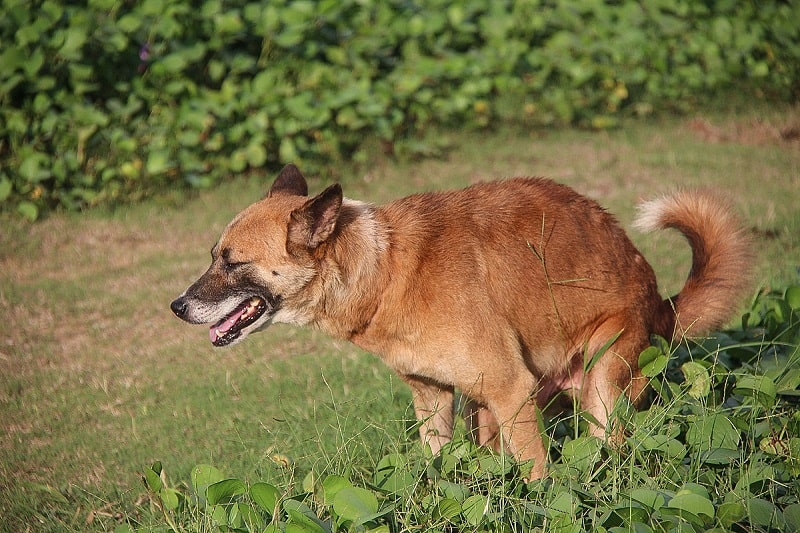 Symptoms of Roundworms in Humans

Can you can get roundworms from your dog licking you? If so,  you must be aware of the symptoms commonly observed in humans.

Unfortunately, there are more than one species of roundworm! These can do different things to the body. The most common type of roundworm is spread due to poor hygiene, from infected hand to mouth contact.

Some people with intestinal roundworm infections might not even have symptoms! When they do appear, symptoms can include:

Pinworms are extremely common intestinal worm parasites! In fact, these are the most common human intestinal parasites in the United States. A human (normally a child) can become infected when ingesting or inhaling pinworm eggs.

Pinworms are spread by the fecal to oral route (CDC).

Pinworms can cause itching near the anus, sometimes leading to restlessness and inability to sleep. Other than this, pinworms usually don’t cause much harm and are pretty easy to treat.

Hookworms live inside the host’s small intestines. These worms most often infect hosts that walk barefoot over contaminated surfaces.

Blood loss and anemia are the most serious symptoms a human patient infected with hookworm might experience, but most don’t see any symptoms at all.

Unfortunately, you can get hookworm from your dog. Infected dogs will pass hookworm larvae in their droppings. Hookworms can penetrate the skin, so a human walking barefoot over contaminated soil can pick these up. Immature hookworms are microscopic, so you won’t see the larvae. 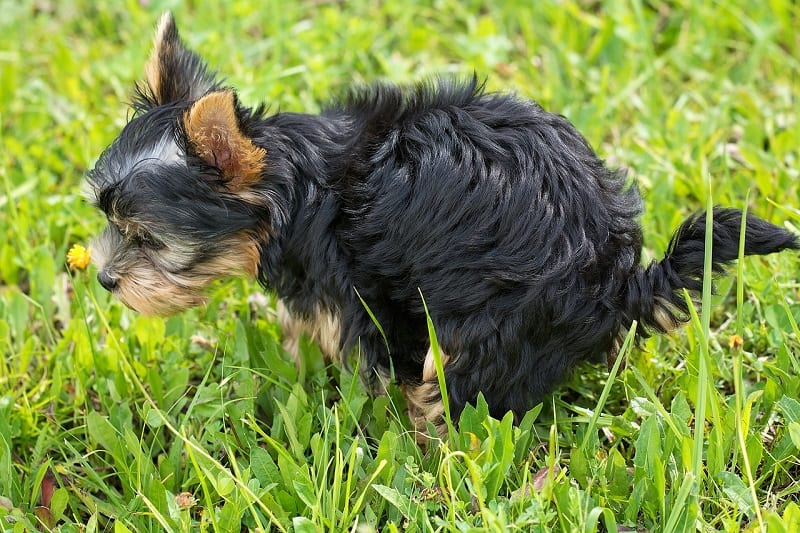 Whipworms live where your dog’s small intestine and large intestine meet, called the cecum. Like all the others here, dogs can become infected by swallowing whipworm eggs either found in feces or contaminated soil.

Whipworms can cause severe irritation to the intestinal lining around the cecum, leading to bloody diarrhea, weight loss, and a host of other gastrointestinal issues!

Thankfully, whipworms aren’t zoonotic and don’t infect humans. You have nothing to worry about from these nasty parasites! They are one of the more damaging intestinal worms a dog can get, however.

How is Roundworm in Humans Treated?

Roundworm infections in humans are most often treated with anti-parasitic medications. Children under one-year-old need special instructions from a treating physician. Without this treatment, roundworm infections might live inside of a human host’s intestines for up to two years!

Where is Roundworm Most Commonly Found?

Roundworms, along with many other parasites transmitted via feces, contaminated soil, or even untreated water, are most often found in areas of the world with poor sanitation. Roundworms can be found all over the world but are also more common in tropical to sub-tropical climates.

Where can you get roundworms from your dog? It’s possible to get them anywhere in the world, but much less likely in first world countries like the United States or many areas of Europe. Clean, treated water is huge!

If you do live in one of these underdeveloped areas, make sure to:

Can Roundworms be Fatal?

Roundworms specifically (not the other four listed above) are very rarely fatal, but it is possible! A certain type of roundworm most commonly found in raccoons can cause a lot of damage if left untreated.

Because these worms are so large, a big number of them can lead to an intestinal obstruction, which can indeed be very serious!

Who is at Most Risk for Roundworms?

Besides people living in unsanitary conditions, children are at a greater risk than adults. Children play outside more often, are more likely to be around an animal’s mouth, and are less likely to practice good hygiene.

People who don’t wash their hands and walk around outdoors barefoot, or play around in the dirt often, are more likely to contract these parasites.

Since animals are the main host, pet owners are more likely to get roundworms than non-pet owners, but this depends largely on the area you live in.

Can Roundworms Wind Up in the Lungs?

After hatching in the intestines, larvae can migrate to the host’s lungs. If this happens, they can cause respiratory symptoms like shortness of breath, continuous coughing, etc. Patients might see abdominal pain or even experience organ damage later on!

Can you get roundworms from your dog licking you? If so, you want to have a solid prevention program in place.

This isn’t something you want to treat homeopathically. Deworming medication prescribed by a veterinarian is best here.

When most people think of de-worming a puppy, they imagine large roundworms or tapeworms they can easily see! Indeed, these worms can get very large but there are also much smaller parasitic worms, like whipworms or hookworms.

These worms could be difficult to kill off entirely with anything but the proper prescribed veterinary treatment.