Loratadine is a type of antihistamine. Antihistamines are meant to diminish allergic reactions or treat the symptoms of an allergy.

Loratadine basically reduces those natural histamine effects when your body is reacting. It helps relieve those symptoms of allergic reactions.

What is an Antihistamine?

Histamines are chemicals created by the body, defending against any potential allergen. An allergen is considered a dangerous or harmful invader by the immune system. It reacts by releasing histamines (specifically released by white blood cells). 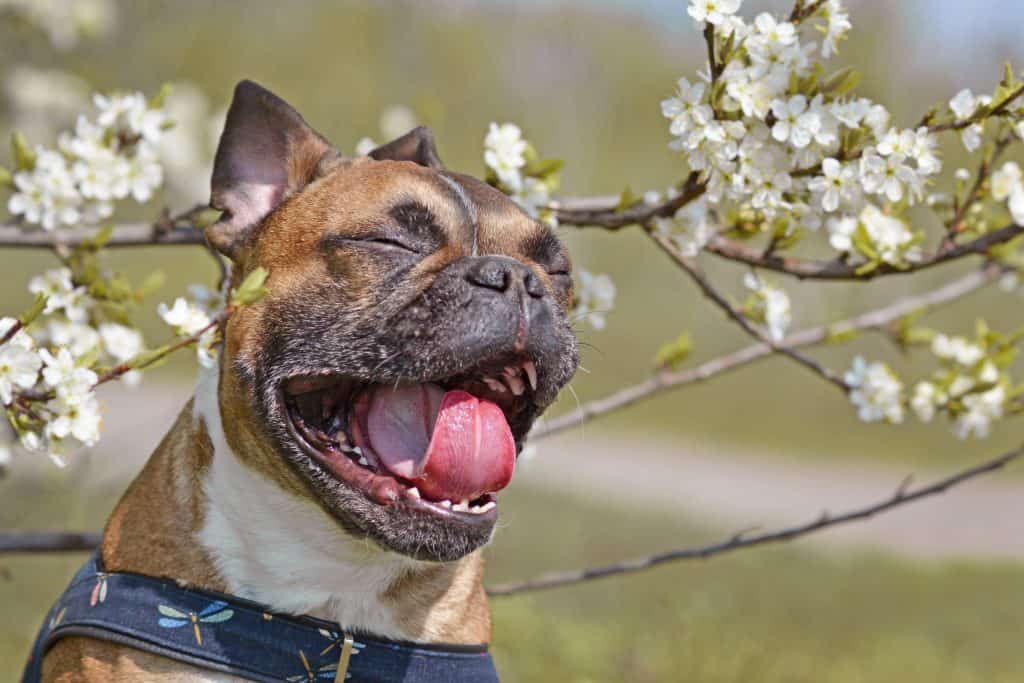 But what happens if our body (or your dog’s body) misinterprets this invader? What if it really isn’t harmful at all, but the body reacts anyway? What if the body overreacts to something that is really meant to help, mistaking it for something harmful?

We’ve created antihistamines to treat side effects caused by those histamines. Like Benadryl (Dyphenhydramine), Cleratin (loratadine) is an antihistamine.

Why We Take Antihistamines

Our immune system has made a mistake! By trying to help, it is actually making things worse.

If this happens, we want to use antihistamines to deal with the symptoms of that allergic reaction.

How allergic reactions show in dogs

Most allergic reactions manifest in the form of a rash on a dog’s skin. Of course, this can be irritating and uncomfortable for your dog, but it usually isn’t a huge medical issue! Your dog isn’t going to die, or his throat probably isn’t going to close.

It will itch though. Your dog won’t like this itchy feeling! So, your pup is probably going to scratch at that itch. He might even bite at it. 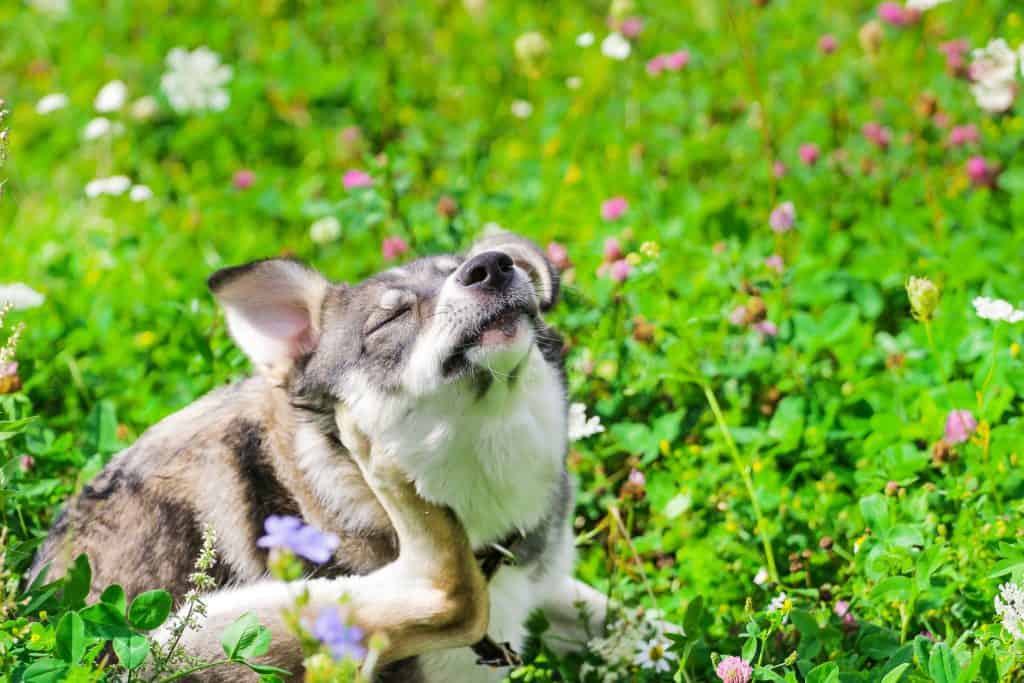 This can lead to hair loss and open sores from all that scratching and biting. Now that barrier (the skin) against any outside bacteria, such as the countless ones that will collect on your dog’s paws and nails, is completely open!

Imagine your dog scratching at that open wound. All that dirt and bacteria (and anything else) your dog picked up from the ground has an open doorway into your dog’s bloodstream. This can have severe consequences!

On top of the allergy, now you might have to deal with an infection your dog got from introducing bacteria to the wound when scratching. This can be much worse than the allergy you started with!

It’s better to treat an allergy before this happens.

You’re probably wondering if your dog can take loratadine for allergic reactions!

It’s important to remember this medication was developed for humans, not animals. Even though it might be safe for dogs to take Loratadine, you should get into the practice of asking your veterinarian before giving your dog any medication. 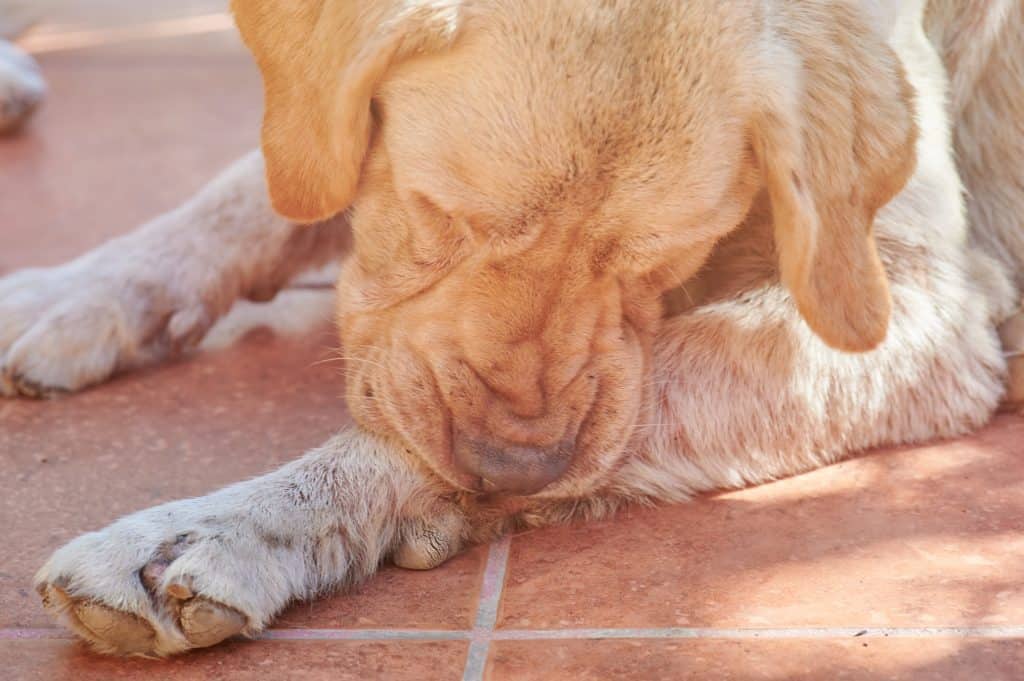 The answer is yes, dogs can take Loratadine for skin allergies! There are a few exceptions though.

Are there any side effects of Loratadine?

Loratadine can have some side effects, just like any other medication. Though there aren’t many and they are rare, it’s important to know about them.

Side effects aren’t as well known in dogs, but we’ll list side effects of Loratadine that were observed by humans. Remember, we aren’t dogs so we can’t say first-hand how they feel!

If too much Loratadine is taken, these symptoms have been observed in dogs:

How do i give my dog Loratadine?

Does your dog hate medications, and absolutely refuse to take anything that isn’t tasty human food? Are you looking for some helpful hints? Try the suggestions below!

“Pill Pockets” taste like dog treats but are shaped in the form of a capsule that will “wrap” your pill. These taste great for our dogs and are wonderful ideas! 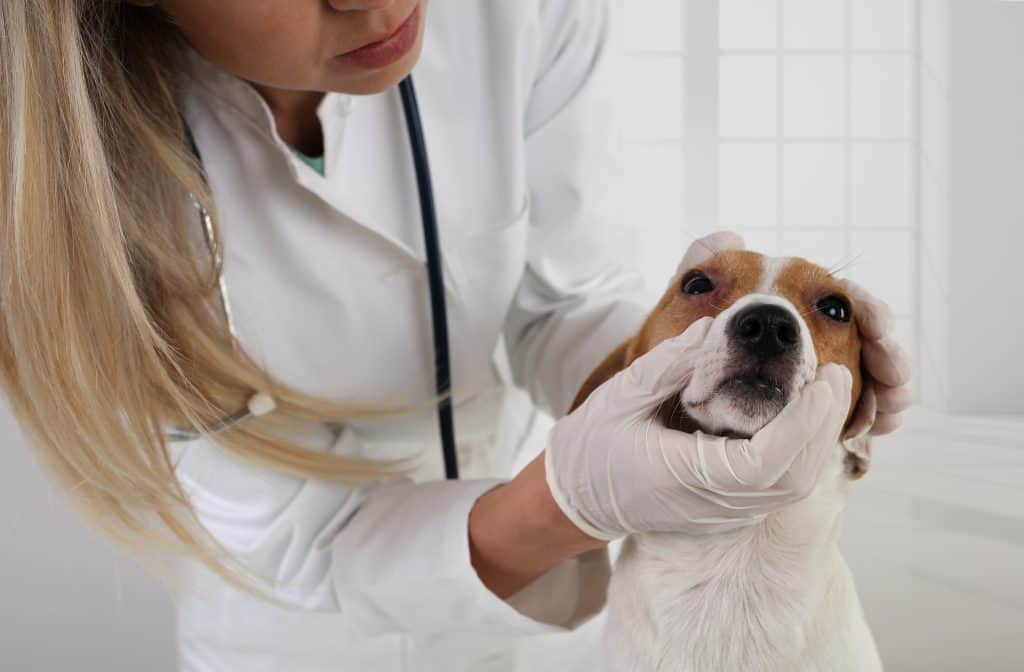 Hide the pill in food

The best general advice veterinarians give for owners with dogs who don’t like to take pills is to hide the pill in food! Now the question is how exactly you’re going to do that.

Wrap in a piece of bread covered in peanut butter

The peanut butter will help the pill adhere to the bread and make it easier to wrap the bread and cover up the pill. Most dogs would never even know they took anything!

Dogs might sometimes spit out the pill after eating their food, so you’ll want to keep an eye on your clever canine friend.

How much Loratadine can my dog take?

Your veterinarian has given you the ok to give your dog Loratadine for his skin allergy, but you’ve either forgotten to ask how much or forgotten the dosage advice your vet provided you. You don’t want your dog to get an overdose!

What are you going to do?

You can give ¼ mg. per pound, or half of a 10 mg. Loratadine (Claritin) tablet for every 20 pounds your dog weighs. Give this only once daily, unless otherwise advised by your veterinarian!

Though dogs can take Loratadine in most cases, there are always going to be some situations when they shouldn’t. Make sure you take a look at the tips below! 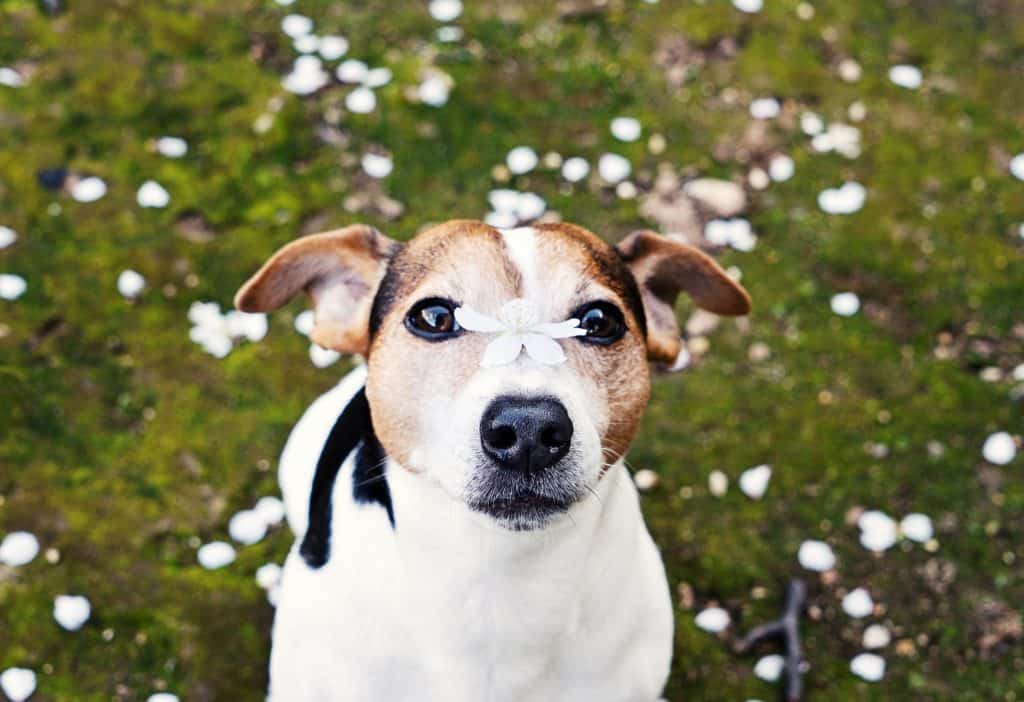 In fact, you should never give your dog any medication or drug designed for use with humans without the approval of a veterinarian! This is a general rule covering any medication.

This is because many medications that are harmless to humans and very common for us to use can be toxic or include ingredients not suited to your dog’s condition. You also need to be able to get the dosage correct for your dog’s age and weight.

Claritin-D contains pseudoephedrine, which is toxic to dogs.

Don’t give Loratadine to pregnant or lactating female dogs

The safety of Loratadine hasn’t been evaluated with pregnant dogs or puppies. Since it can pass through breast milk, you should not give Loratadine to breastfeeding female dogs.

Don’t give Loratadine to dogs with liver or kidney disease

Dogs suffering from kidney or liver disease can be at a greater risk of suffering from side effects. Talk to your veterinarian if you’re unsure or still want a way to treat those allergies!

Xylitol is an artificial sweetener that is used in many human foods but is highly toxic to our dogs! Certain Loratadine tablets could contain Xylitol. 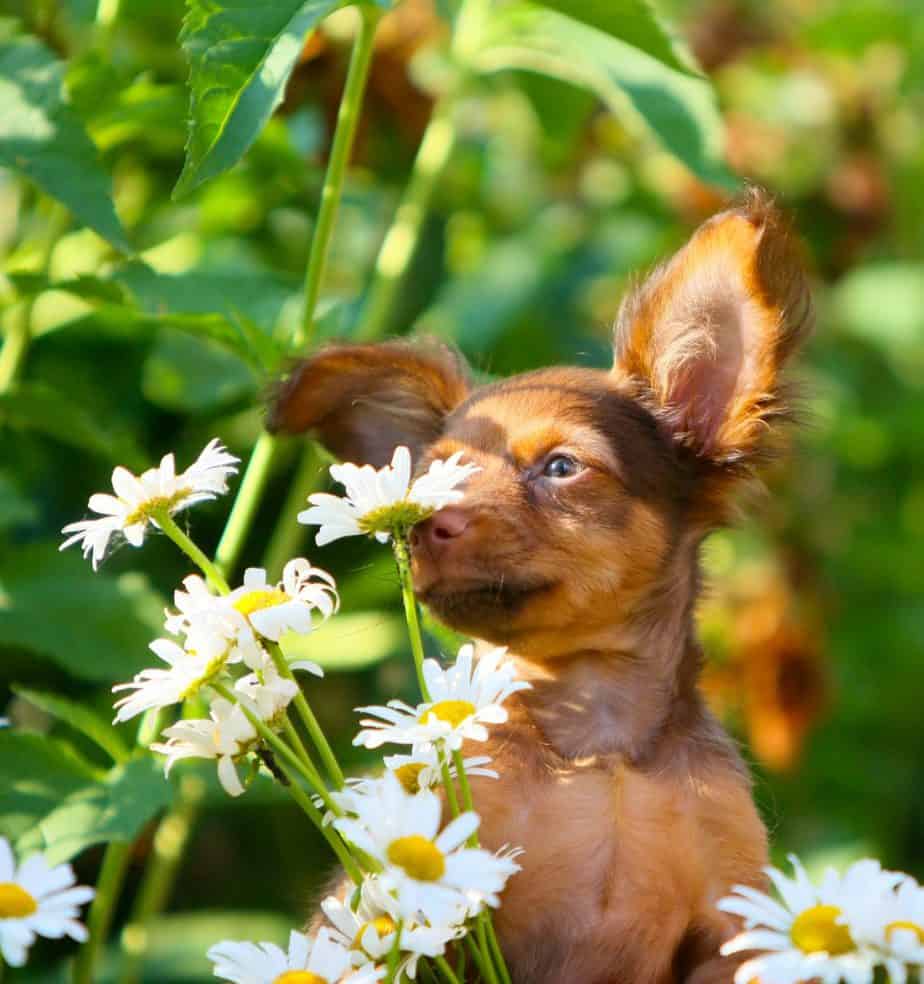 Can my Dog take Benadryl?

Like Loratadine (Claritin), Diphenhydramine (Benadryl) is also used to treat mild allergies and can also be given to dogs, with your veterinarian’s permission. About 1mg of Benadryl per pound of bodyweight is safest for your dog.

Benadryl can also have a drowsy effect and might be suggested for situations like travel anxiety. Loratadine probably won’t cause as much drowsiness, which is really one of the main differences between the two products.

While most allergic reactions can cause skin rashes, some dogs can still suffer from severe reactions impacting their airways/upper respiratory system. If severe enough, it can cause your dog’s throat to swell and begin to close.

Loratadine can be used to treat mild reactions but might not be very effective in such a life-threatening emergency. That is if your dog can swallow food at all!

Ask your veterinarian for advice in case of severe allergic reactions.

My dog’s skin rash isn’t improving after taking Loratadine. What do I do?

It’s important to know exactly what caused the allergic reaction, or if it is an allergy and not something totally different. For example, many dogs are allergic to the saliva of a flea bite, but other parasites (i.e. ticks) can cause rashes Loratadine might not treat.

Following the example of the tick, it’s important that it be removed properly for symptoms to go away.

Is something in the house causing the allergic reaction? Is it a food-related allergy? Is it caused by a chemical from the outside environment your dog is continuously exposed to?

These questions highlight why it is always important to first consult a veterinarian before giving medication, even if we think it is the right decision! After all, licensed veterinarians are Doctors of Veterinary Medicine, and no less competent than general human practitioners.