The answer to the question “Are pregnant dogs more aggressive?” cannot be provided without a discussion of the causes and symptoms of nervous pregnancy in dogs.

What is nervous pregnancy in dogs?

Nervous pregnancy is not just a problem affecting dogs but most mammals. Its scientific and uncommon name is pseudocyesis, but this term is not much used in the veterinary world.

Nervous pregnancy manifests itself in unsterilized bitches after the heat period. The female dog displays a behavior and physical reactions similar to those of pregnant bitches, without going through complete intercourse.

Contrary to what one might think, a dog’s nervous pregnancy has nothing to do with its nerves but rather to hormonal imbalance. 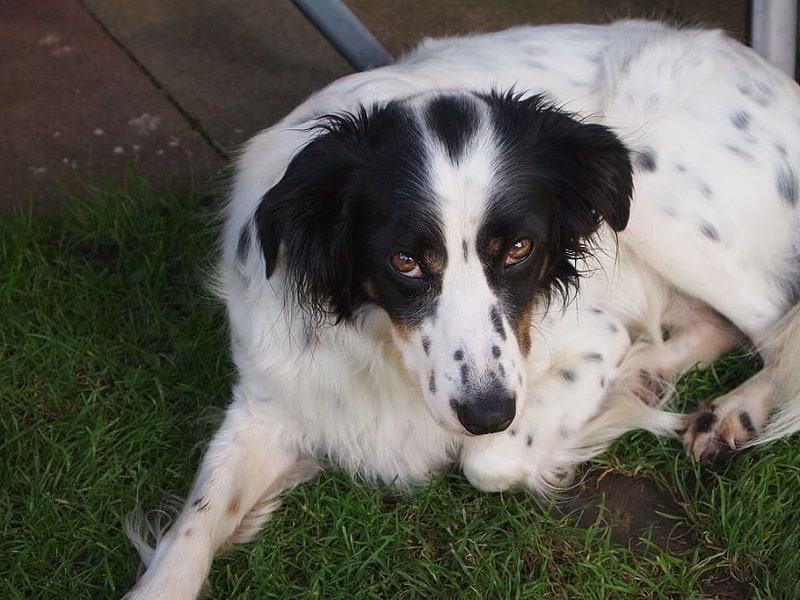 Cause of nervous pregnancy in dogs

A bitch of childbearing age (6 to 24 months depending on the breed) experiences an heat period every 6 to 7 months that lasts 3 weeks on average. It is important to know that the bitch ovulates systematically in each cycle and that unlike other mammals, the production of progesterone increases before ovulation occurs.

The bitch, fertilized or not, then enters the metoestrus or diestrus phase. This phase, which lasts about two months, is characterized by a high progesterone level. Once the metoestrus ends, the level of progesterone plummets, resulting in an increase in the hormone responsible for milk production, namely prolactin.

This is part of the reason that bitches, during a nervous pregnancy, produce milk, just like a pregnant bitch. To better understand your dog’s sexual cycle, we recommend that you contact your veterinarian. He will also be able to establish a fertility check-up of your dog and measure the level of progesterone present in the blood of your female dog.

It is difficult to explain the real causes of a nervous pregnancy. Some theories relate it to a natural, adaptive mechanism. In fact, in a pack of dogs, the cycles of the bitches are synchronized, which would ensure puppies who have mothers with lactation problems, do not lack food. 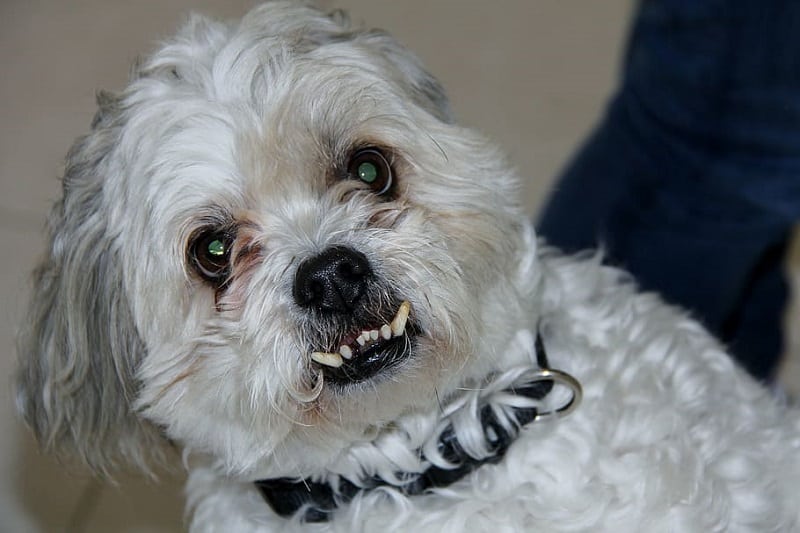 The symptoms of a nervous pregnancy in a dog are similar to those of a normal pregnancy. This is why it is sometimes difficult to know if your dog is in a nervous pregnancy condition or not, especially if her lifestyle allows her to go outside as she pleases and therefore be in contact with males hanging around the neighbourhood.

However, there are certain symptoms that can point to nervous pregnancy, such as:

Swelling of the udders

The production of prolactin starts the lactation process. In some cases, more or less milk flow may occur.

Licking of the udders

The production of milk that will stagnate can create pain in the bitch, who will tend to lick herself in that area.

Licking of the vulva

The body of the bitch sends out false signals of gestation. The bitch will lick herself more at the level of the vulva and can even sometimes face contractions, as if she was going to really give birth.

A change in appetite

A nervous pregnancy in dogs can result in a decrease in appetite or even a refusal to feed.

The preparation of a “nest”

This phenomenon is quite representative of the nervous pregnancy of the bitch. The dog will fetch fabrics or pieces of cushions and bring them in her basket or kennel and hide them.

The adoption of substitute objects

Some bitches will go so far as to find soft toys and care for them as if they were their babies.

The appearance of nervousness or abnormal behavior in your dog should get your attention. Depending on the dog and her personality in normal times, she may start to act in an unusual way. For example, an independent dog may seek the attention of her master, or conversely, one usually very close to her master may tend to isolate herself. 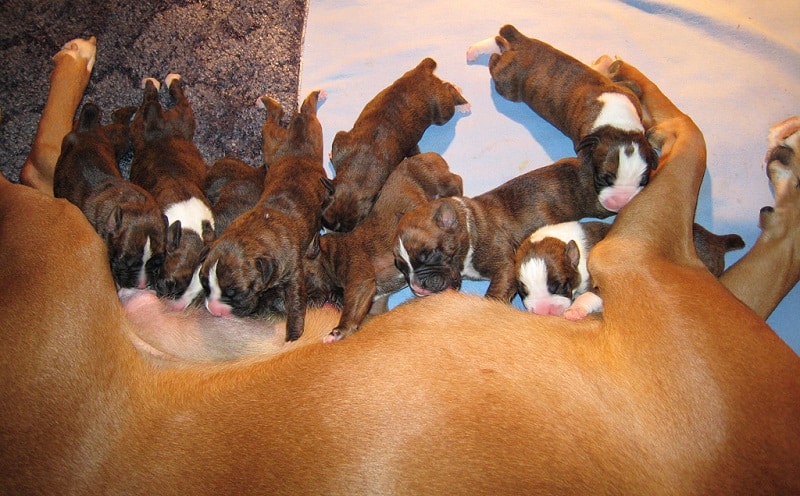 Are pregnant dogs more aggressive? How long can this last?

A dog’s nervous pregnancy can be a difficult time for both dogs and owners. Indeed, if your dog has already had a nervous pregnancy, she will be more prone to relapse during her next heat period.

Fortunately, after a week or two, sometimes three, things should be fine. Obviously, if it’s not the case, we strongly invite you to make an appointment you with your veterinarian who will be able to identify the cause of the problem.

How to react to a nervous pregnancy in your dog?

Nervous pregnancies have an impact on the well-being of your dog as well as on her health. Female dogs that are prone to have nerve pregnancies have a greater risk of developing health problems, particularly related to the reproductive system, such as uterine infections, inflammation or abscess of the udder, or even longer term, breast tumors.

Unfortunately, there isn’t much you can do when your dog is dealing with a nervous pregnancy. However, you can be careful not to reinforce your dog’s mothering behavior. If she has adopted a soft toy and cares for it as if it were one of her little ones, for example, it should be taken away.

Providing more time for outings and games can also have a beneficial effect, and if she tends to be overly affectionate, don’t let that upset you and push her away. You can also limit access to its nest and distract her to other places or activities. 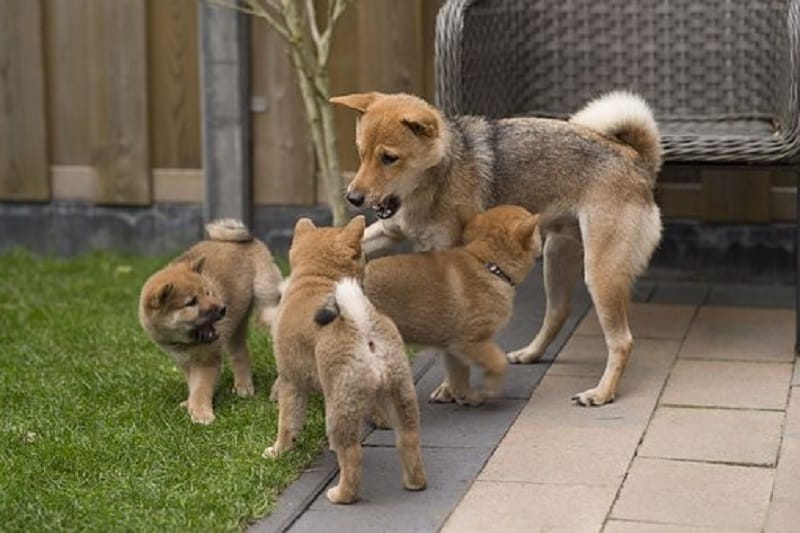 On the physiological side, do not touch your dog’s udders in the hopes of relieving her. Likewise, be careful that she does not lick herself too much, as this may further boost milk production.

Treatment of nervous pregnancy in dogs

Are pregnant dogs more aggressive? Now you know it can be the case and as a first step, it is obviously necessary to take your dog to the vet for a complete check-up.

The first step will be to confirm the nervous pregnancy condition. Indeed, some symptoms of nervous pregnancy are very similar to those of a real pregnancy, so this hypothesis must first be ruled out. An ultrasound can be performed starting on the presumed 21st day of gestation. An x-ray (possible from the 45th day) will also confirm a possible pregnancy of your dog.

If it is established that it is a nervous pregnancy and that your bitch is not pregnant, then she can be administered an inhibitor of the secretion of prolactin, the hormone responsible for the production of milk in the bitch. The treatment lasts about a week, sometimes a little longer, and is aimed at ending lactation and thus providing relief to your dog.

The symptoms of nervous pregnancy could be relieved by the bean of St. Ignatius (Ignatia amara), which has a tranquilizing effect on dogs. However, consult a homeopathic veterinarian before giving anything to your dog. Indeed, only a specialist can tell you the best approach to adopt. 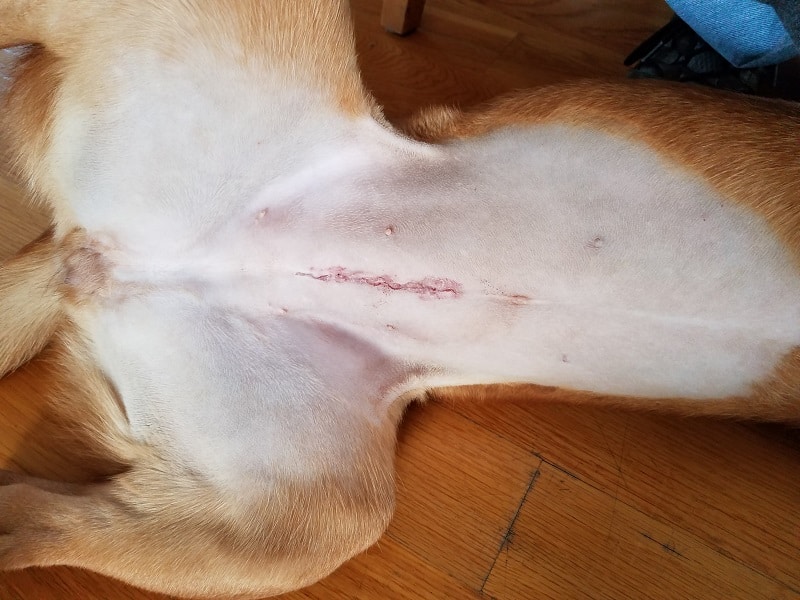 The only preventive treatment for nervous pregnancy in dogs is sterilization. The sterilized female dog is no longer able to reproduce, does not go through heat periods anymore, and all the symptoms associated with it. She is therefore no longer prone to bleeding, her behavior is more stable and she no longer seeks contact with males.

Spaying your dog will prevent her from developing infections of the uterus associated with nerve pregnancies, in particular, pyometra, which is a serious condition. In addition, as the heat period no longer occurs, the lactations linked to the nerve pregnancies that she may have experienced will also disappear. Finally, as we have seen, nerve pregnancies promote udder disease, especially breast cancer. Sterilization will have an effect on preventing breast cancer. However, the earlier it is done, the more effective it will be. In fact, the risk drops from 0.5% during sterilization during the first cycle to 26% if it is carried out after the second cycle.

Many dog owners are confronted with nervous pregnancies. This hormonal imbalance, may not have much impact on the quality of life of the dog and her master and may not be that serious. However, in many cases, symptoms are quite serious and disrupting and need to be treated. To avoid nervous pregnancy of your female dog or any recurrence, sterilization is recommended. Do not hesitate to discuss this with your veterinary.