The husky breed is known for a lot of personality traits such as talking too much and their stubbornness and sass. But what about their intelligence? Are Huskies smart?

Many owners interested in adopting a Husky wonder about how smart they are beforehand. This article is here to tell you all about the breed, their intelligence and how they compare to other dogs.

Some of the most helpful pieces of data about whether huskies are smart came from studies and material written by a canine psychology professor and avid studier of dog intelligence and behavior, Stanley Coren, PhD. Coren reached out to and collected a load of information from 200 professionals in the North American Kennel Club (Canada and US) about over 100 dog breeds, huskies included, of course.

So are huskies smart? Dr. Coren’s data shows that huskies rate around the average level of intelligence, scoring in the middle at 74th place (out of 138).

There is more to understand about how we measure and rate a dog breeds intelligence. While plenty of dogs scored higher than huskies, there were several factors that went into the testing. This article will explain how and why Dr. Coren and his Kennel Club help came to the conclusions they did about Husky intelligence and behavior.

This arctic breed has some mixed history with Russia and the US wanting to stake claim over the breed’s origin. They were bred to be runners and working dogs that helped Inuit people pull sleds and do other physical work in the snow.

This breed has a high prey drive, meaning that they will often go after small animals and are known for their stubborn nature. Many owners of huskies will tell you that while they are smart dogs they are more obstinate and difficult to train than others.

These dogs thrive on having a job to do and crave contact with their favorite people. Allowing them to be bored and frustrated will only lead to them becoming destructive and potentially running off.

Huskies are sociable and funny but can also be annoying when they don’t listen and scream or talk back constantly. However, their ability to ‘verbally communicate’ also shows a higher level of intelligence. No matter how annoying it may be when you’re trying to get something done and your husky is barking behind you about treats, it means they know how to get what they want.

How Do We Measure Dog Intelligence?

There are two factors that were used to identify an individual dog breeds intelligence levels, and that was based on the number of repetitions it took to comprehend a new command and the success rate for obeying a known command.

While this criteria is a good structure to use for determining breed intelligence, there were some mixed reviews about the results and their accuracy. Coren attempted to make the system fair by only accepting results from breeds that had at least 100 responses.

Overall, while there was criticism circulating around his data, it was also met with a lot of positivity as well.

Besides repetitions and obedience, there are two other factors that Dr. Coren uses to interpret canine intelligence. Those are instinctive vs adaptive intelligence. 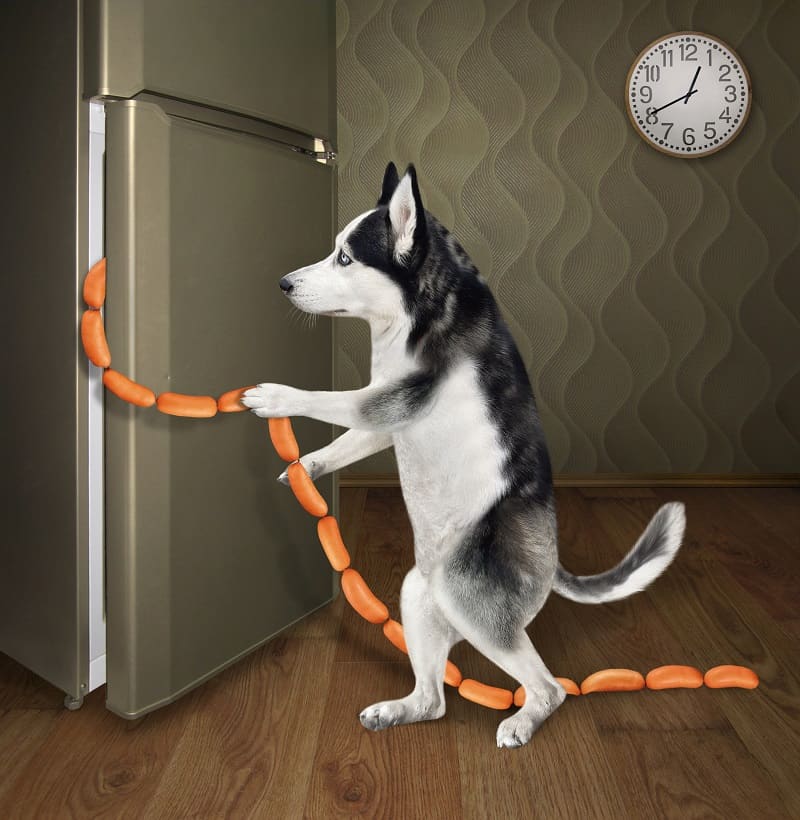 Adaptive intelligence is something that huskies rate highly for, but this is the most difficult to accurately measure. This is what indicates how independent a dog is and if they are able to learn on their own through trial and error without human guidance. Clearly, huskies have a lot of this adaptive intelligence, as they most of the time prefer to do their own thing.

You probably guessed it already, but instinctive intelligence is describing the skill set and behavior that the breed was originally created for. Huskies are part of the working group of dog breeds, which means that they were of course bred for physical work. Specifically running and pulling sleds.

This breed will immediately take to its old job and will instinctively be able to pull a sled without much human command or training. Huskies have been known to work as search and rescue dogs and can also run a truly impressive number of miles in a short amount of time. Some dogs can run close to 100 miles a day!

Huskies and Their Intelligence Rating

Huskies land right near the middle at 74th place, while it puts them in the average intelligence category, it certainly doesn’t mean that they’re not that smart.

Based on the scale criteria that Dr. Coren uses, huskies needed about 25 – 40 repetitions in order for them to learn a new command and when it comes to obedience, they would obey a known command at least 50% of the time.

Several other dog breeds such as Boxers and Australian Shepherds fall into the same average intelligence category. 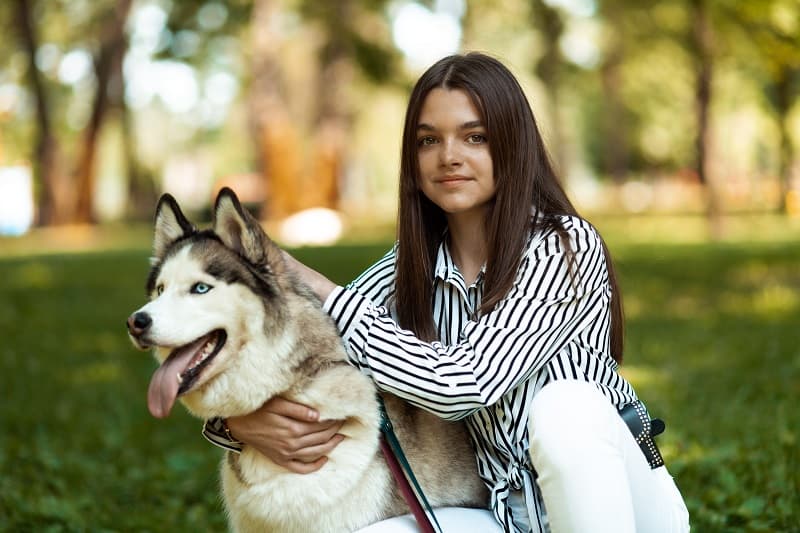 Why Are Huskies Ranked Lower in Intelligence Than Other Breeds?

The honest truth is that huskies would probably rank higher on this scale if they weren’t so dang stubborn. They really like to do things on their own time and their independent-mindedness is really what docks some points for the breed. Sure, their independence can be seen as a positive trait, but many people view it as a complication in the training process.

Many husky owners wonder, is my husky smart? Usually after struggling to get them to listen to somewhat simple commands. What the real issue is that they probably know what you’re asking or telling them to do but they just don’t want to obey. I’m assuming they have their own plans in mind instead.

Huskies Are Smarter Than They Seem

Despite where they land on the canine intelligence scale by Dr. Coren, Huskies are actually smarter than they lead on. As mentioned before, their independence, while it is a benefit and a crutch at the same time, it does mean that they are self-sustaining and quick to learn on their own without human interaction. Which is actually pretty impressive!

Their stubbornness gets in the way of their actual intelligence by causing them to easily lose focus and follow their own personal priorities. Sometimes finding a motivator like food, play or toys can help keep your Husky’s attention on your instead of their own plans.

Absolutely! Don’t doubt this breeds level of intelligence, they will surprise you. Even though this breed doesn’t rank super high on Dr. Coren’s intelligence test, they are still among one of the more popular breeds of dogs in the US. For good reason. They are funny and endearing and have sassy and amusing personalities.

Yes, they are stubborn and that can make them seem less smart than they really are, but a well-trained husky can be amazing. Huskies can make great service dogs because of their adaptive intelligence and their independence. They can make their own quick judgements about what to do and how to solve a problem, most likely saving someone’s life. 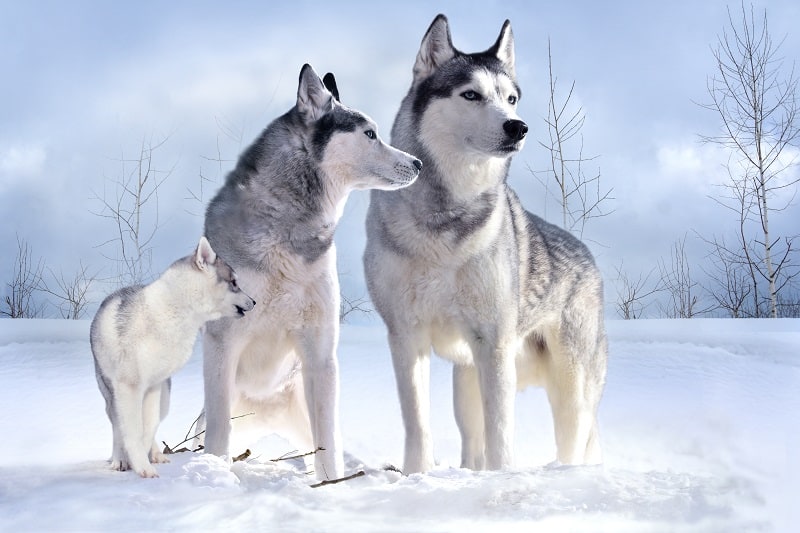 While training a husky can be difficult and requires tons of patience, you can easily teach your dog a new command in one afternoon, as long as you can find a motivator. This breed can be hugely rewarding if you have them trained properly and they listen to you (most of the time).

Remember, they will find ways to test you and your sanity as the alpha on a regular basis, they can’t help it, it’s just their nature. They’re almost like a kid, they want to see what they can get away with.

Are Huskies Smart? What Do You Think?

If you have ever had or met a husky, you probably remember their striking features and personality, but do you feel like they were smart? Most likely, YES. It’s hard to deny that this breed is intelligent with its communication skills and seemingly human-like understanding of things.

This goofy breed and their amusing temperaments make for great companions and family dogs in a world where pulling a sled isn’t necessary. Although, giving your husky some work to do will help you keep them busy and from making impulsive decisions.

Don’t let their stubborn nature and sassy personalities deter you from bringing home a husky. They can make excellent companions and family pets as they are lovable and affectionate, independent and clever. But what do you think? Are huskies smart?