Because huskies are a larger dog breed that is known for their willful personalities, many people looking to welcome a new dog to their family may find themselves asking, “are huskies aggressive”? While there is no denying that each and every dog has their own unique personality (just like us!), the American Kennel Club describes the temperament of Siberian Huskies to be affectionate and well behaved with other dogs and children.

As mentioned above, even though huskies aren’t genetically predisposed to show aggressive behavior, because each and every dog has their own personality, they can be aggressive under certain circumstances. Here, you will learn everything that you need to know regarding the temperament and behaviors of huskies.

Are Huskies Aggressive? – Exploring Their Temperament

Huskies are, for the most part, are very mild-tempered dogs. They are great with kids and other dogs while displaying a happy openness to new people. If you are looking for a stoic guard dog to watch over your house, these guys may not be your first option. However, they are typically known for their welcoming and king nature.

However, if you are looking for a dog that is highly adaptable and happy to share his or her space, then huskies may just be a great match! One thing is for sure; huskies are very vocal and known for their high-energy levels. In short, these dogs need stimulation and plenty of activity – a perfect addition for families who are active and happy to spend time playing with their family and friends.

Environments They Thrive In

Ultimately, your husky is very likely to show you and your family plenty of affection, including your smaller and younger kids. They usually have no problem getting along with other dogs, meaning they will interact well with other dogs if your household has more than one pet.

To best keep your huskie in his or her happiest mood, there are a few things you should keep in mind. Huskies are very active and greatly benefit from plenty of exercise and time spent outside. While they are generally happy and pleasant, huskies are known for being strong-willed. A confident owner who finds it easy to take charge will have an easier time with the will of a husky. 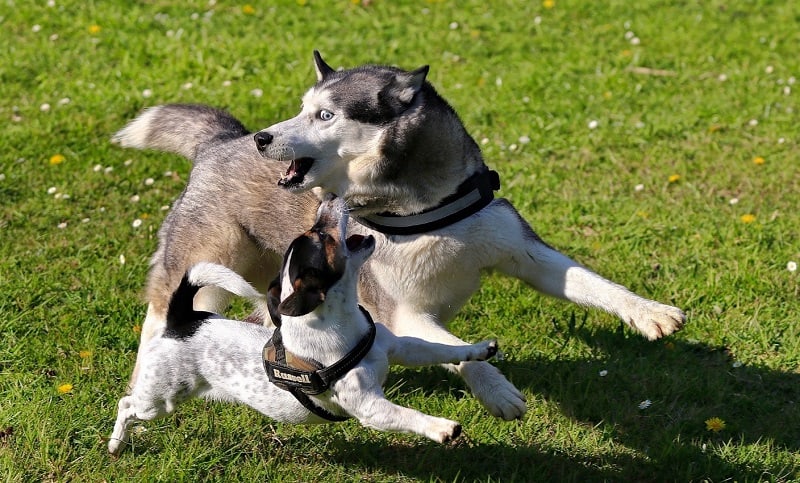 What Do The Stats Show?

Of course, statistics do not always describe the whole picture accurately. Still, if you are the type of person who appreciates figures or needs something concrete to put their mind at ease, then you will be happy to know that huskies are rarely responsible for attacks against humans.

A study conducted between 2005 and 2017 demonstrated that canines killed 433 Americans over a thirteen-year period. Of those deaths, often referred to as DBRF (human dog bite-related fatalities), pit bulls and rottweilers were responsible for over 75% of these deaths. Huskies made up just 3% of these dog-related fatalities – which accounts for just one each year over the time of the study.

In comparison, golden retrievers, who are widely regarded as one of the most peaceful breeds, were responsible for nine deaths in the same study over the same period of time. This incredibly close figure provides sufficient evidence that huskies are nearly just as peaceful as golden retrievers. As a whole, huskies are incredibly peaceful dogs that rarely show signs or outward behaviors of aggression.

Characteristics That Demonstrate Huskies Are Not Aggressive Dogs

Usually, when we think of a dangerous or aggressive dog, we may describe them as being skittish, suspicious, anti-social, among other disturbing behaviors. Luckily, huskies have been domesticated for a long time and continue to be considered a favorite dog breed throughout the world.

They have many characteristics that contribute to their likeability, especially among families. Exploring these characteristics paints an honest and typical picture of how they interact with people and even other dogs.

Understanding the friendly and sociable nature of huskies starts with understanding their origins. Like a family, huskies were initially bred and raised in big packs, with groups reaching up to fifteen or more dogs. This early socialization led to huskies developing very playful and social qualities.

Today, huskies maintain their need to be around others. Most of the time, they prefer to play, eat, sleep, and live in the constant company of others – hardly a characteristic of a dog that could be described as aggressive.

As mentioned above, huskies love to be in good company. Rather than spend their time alone, huskies prefer the company of other dogs and humans. Generally, huskies are ready to make friends with nearly anyone in hopes of creating new friendships. 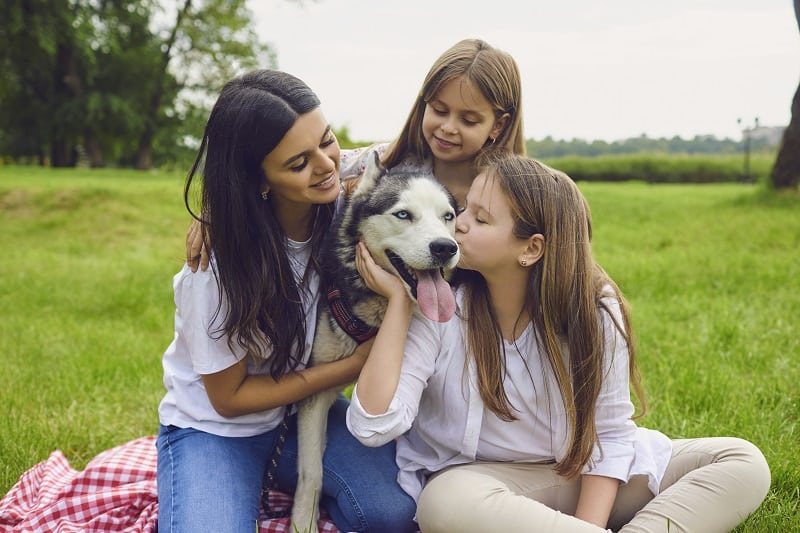 Their idea of a day well spent includes plenty of time spent outside playing with their loved ones and snuggling up on the couch with the family in the evening. This behavior is usually what makes it so easy for huskies and children to form strong bonds.

Huskies are not inherently suspicious of strangers or those who they do not know very well. While this may not be the most sought-after trait for those who want a dog that guards their home, it is certainly great for families that like to welcome many guests into their homes.

Their strong sociability makes them more inclined to befriend a new face rather than display suspicion, aggression, or any other form of hesitancy. With little suspicion towards other humans and dogs, huskies are much less likely to act poorly because of their misunderstanding of new people.

Are There Any Potential Threatening Behaviors?

Are huskies aggressive? This is the question at hand. So far, we have discussed all of the characteristics and traits that demonstrate the peaceful nature of huskies. However, there are certainly some behaviors that may be misconstrued as aggression in certain circumstances. Here is what you should keep in mind.

Huskies are a very active breed, so they must be both physically and mentally engaged regularly. You have to remember; huskies were originally bred to pull heavy sleds through brutal weather and often long distances. They like to “work” and, as a result, need consistent activity throughout their day.

Without a healthy amount of activity, huskies can become frustrated, and in extreme cases, destructive. When dogs experience these feelings, they are more likely to act out – much like humans. While aggression is not particularly typical behavior, under these circumstances, it is possible.

Huskies are categorized as a medium to a large dog breed, with males typically larger than their female counterparts. Big dogs usually have more strength and power than smaller breeds. Because they are playful and tend to jump around, they may accidentally become hazardous to small children. 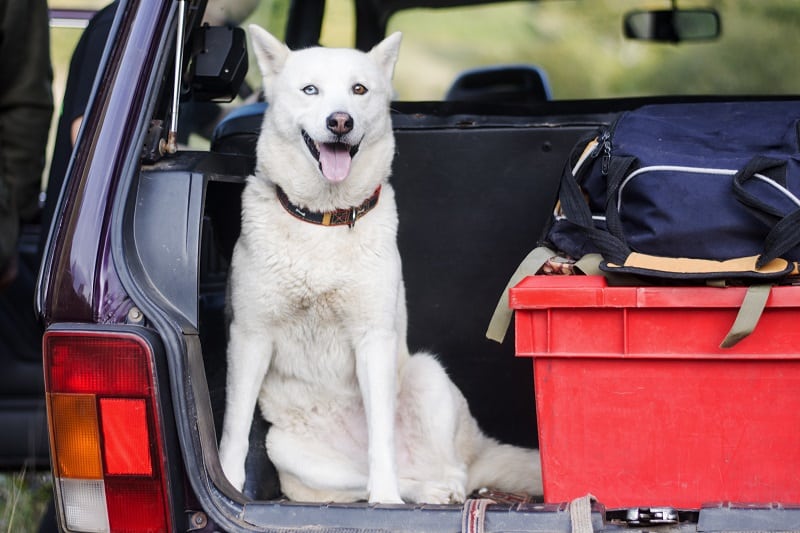 They love to play fight, which can sometimes be misunderstood as aggressive behavior. However, proper training from a young age can help curb their excitement, jumping, and overly playful behavior when necessary.

While the level of independence and stubborn behavior huskies demonstrate depends on each and every dog, huskies are widely considered self-willed and independent. Their typical attitude is “ I do what I want when I want.”

This is another characteristic that can be managed in a healthy way with early training. Their independence and stubborn nature make them a bit harder to control, which some may consider making some families consider them to be less trustworthy. However, with the right approach, this can usually be easily managed.

If you have or are considering welcoming a husky puppy into your home, there are a few things that you should keep in mind when it comes to training and preparing for a happy and healthy relationship with your new addition to your family.

From a young age, your husky will likely show some signs of dominant behavior. This is completely normal, and it is actually their way of testing their boundaries with you. As a dog that is more used to a pack environment, your new pup will have to be taught that they aren’t the dominant party in your home.

The most effective way to ensure this behavior is curbed from the beginning is to instill the proper training if he or she begins to bite too hard, jump on others, or display other forms of boisterous behavior.

As a very high-energy dog breed, you husky will need plenty of exercise to maintain healthy behavior. To give you a clear understanding of their energy level, huskies can run up to 100 miles per day. So, it is incredibly important that they have many opportunities to work off that excess energy throughout the day. 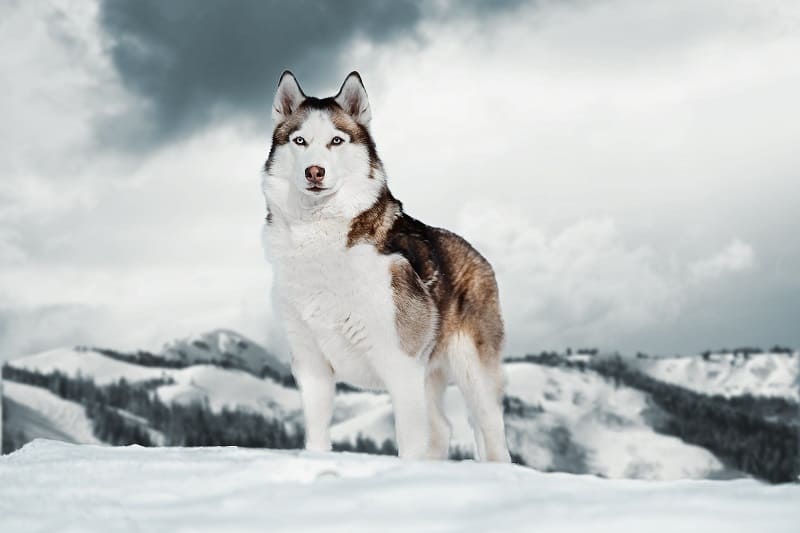 For a husky to sufficiently satisfy their need for daily activity, it is best to ensure that he or she enjoys at least two hours of exercise each day. Incorporating interactive toys and socialization throughout daily activities is great for their mental and physical stimulation.

It is only normal to consider “are huskies aggressive” as you consider welcoming one of these wonderful furry friends into your home. In short, huskies are usually very kind, open, and family-friendly dogs. While it is important to keep in mind that each and every dog is an individual with their own unique personality, with proper training and a healthy lifestyle, they are very likely to make a fantastic addition to your family.