If your dog is scratching his ear, seems to be suffering from the area, you should go to the veterinary because treatment must be put in place quickly!

The treatment to implemented must be bases on the diagnosis of your veterinarian. Do try a different route!

Causes of ear infections in dogs 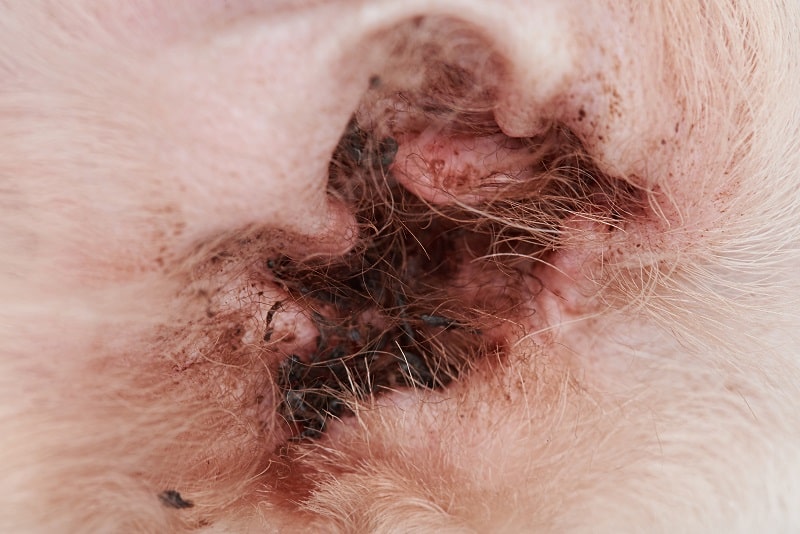 An ear infection is an infection or inflammation of the pinna or ear canal. There is not one, but different ear infections, which can be distinguished according to the origin of the problem:

This parasite (Otodectes Cynotis) looks like a microscopic spider and multiplies in the ear canal by feeding on the earwax it contains.

Ear mite parasites produce dark brown or blackish dirt that can be observed inside the duct. However, be careful, the presence of blackish content in the ear does not always mean that the dog has an ear infection!

These parasites cause very unpleasant itching for the dog. He then scratches his ears frequently while moaning.

It could also lead to a dog shaking his head repetitively. 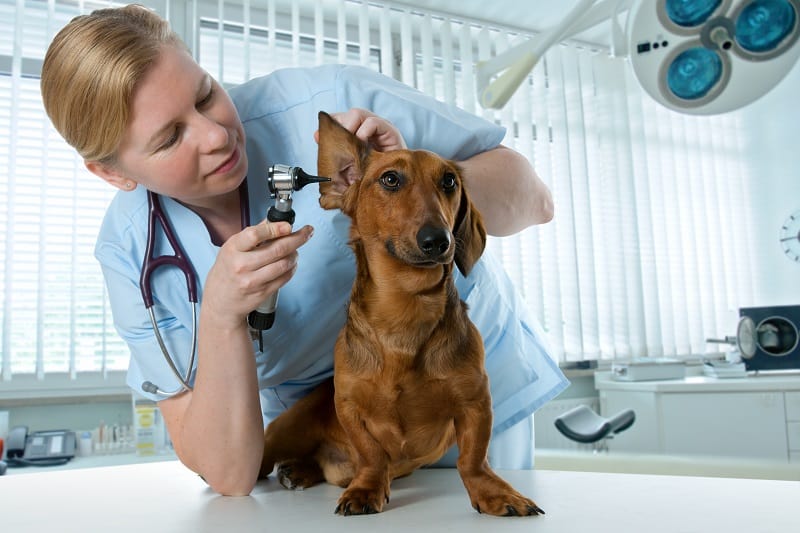 In such a case, you should consult your veterinarian so that he can establish the diagnosis and quickly initiate treatment. This usually consists of drops to be placed in the back of the ears for at least 4 to 6 weeks. It may also include oral antibiotics depending on the severity of the infection.

Ear mites are very contagious from dog to dog, or from dog to cat, but it does not affect other species, nor do they affect humans.

They are manifested by severe pain in the ear, and by the presence of pus and sometimes bleeding in the duct.

They can be the consequence of a “cold snap”, for example when the dog has remained with his head out of the car window. They can also be due to maceration, especially in breeds with floppy ears because the flag permanently covers the orifice of the duct, limiting the proper ventilation of the ear canal. 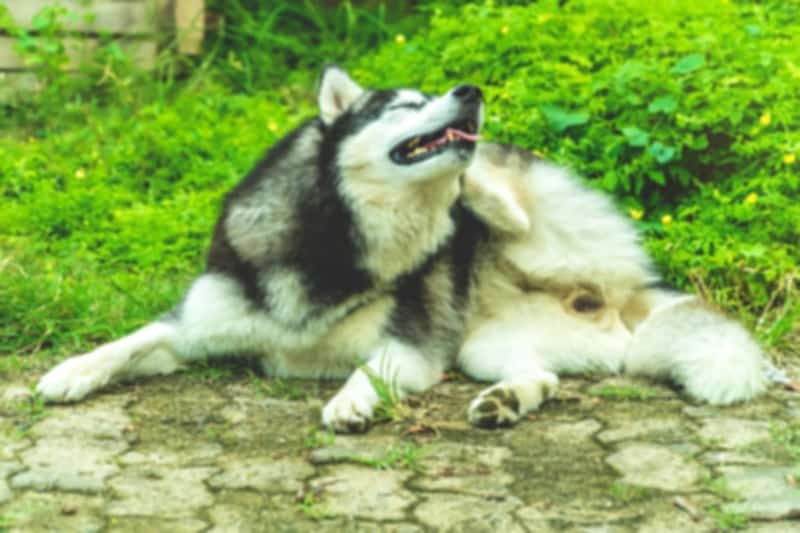 In some small breeds (poodles, bichons, shih-tzu, etc.) hairs grow inside the ear canal, which further increases the risk of maceration. If you notice such phenomena quickly consult a veterinarian. You may need to get on a strict ear grooming protocol.

They are quite frequent. Also called erythematoceruminous ear infections, they are mainly found in dogs with an allergic tendency.

They are mainly manifested by redness and itching on the outside of the ear, on the pinna, and in the cartilages surrounding the entrance to the ear canal. There may also be an accumulation of very thick, yellowish, fragrant earwax, which may be due to a secondary infection.

These ear infections being of allergic origin, they tend to be renewed regularly and must often be the subject of a general treatment of the allergic ground of the animal. 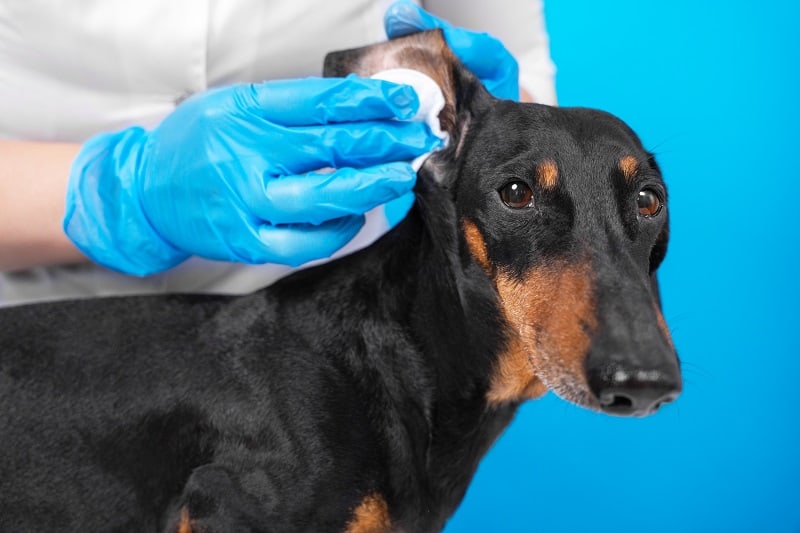 The type of treatment should be discussed with your veterinarian.

This type of infection involves a yeast called Malassezia Pachydermatis. It can be responsible for chronic ear infections and the relapse or poor healing of other types of ear infections.

Infections other than ear mites are often due to maceration and allergies. None of these causes are contagious to humans.

Treatment of ear infections in dogs

Your veterinarian will prescribe a treatment suitable for the origin of the ear infection. It will consist of liquids to instill in the ear canal (cleanser, antibiotics, etc.), tablets, dermatological milk to pass over the pinna, etc.

The most important element of the treatment to be successful is to place the drops properly at the bottom of the ear canal. This will be all the easier when the dog has been used to having his ears cleaned from an early age.

The process should be seamless and painless and certainly without risk for your canine friend if you abide by the following instructions:

Vets recommend to let the dog shake its head so that the dirt goes up towards the entrance of the duct. I prefer to clean up the outer part of ear myself. More precisely, I slightly wet a non-woven compress with a medicated soap such as Hibitane (2% concentration) and wipe the inside of the ear above the entrance of the ear canal.

Bottom line, it’s important to collect the earwax and the dirt that goes up. Repeat in both ears until there is no more dirt coming up.

Please note that the use of a cotton swab is not recommended. There is a risk of irritation by the cotton of the very tight cotton swab as well a fine cotton filaments getting stuck in the area, which can create further infection. 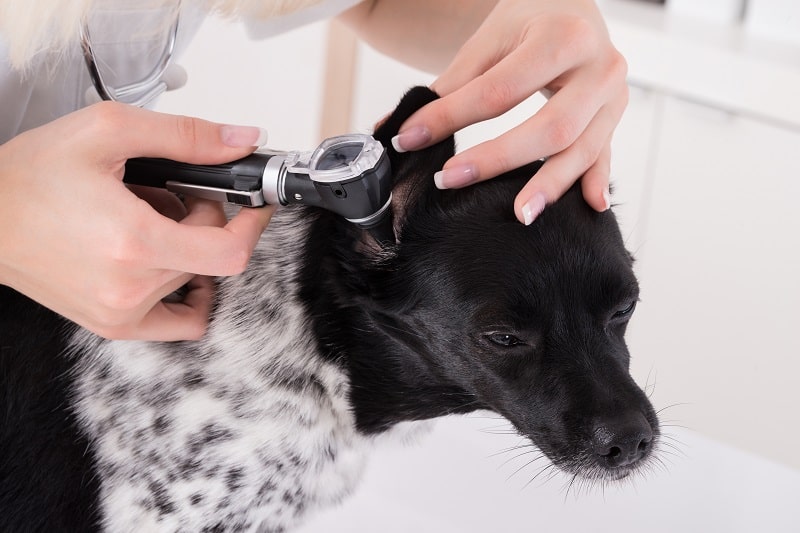