While Pitbulls are known to be very strong and quite energetic, owners of this breed will need to cope with several common pitbull health issues. In the following paragraphs we will review them but first, let’s take a brief tour of the breed’s main characteristics.

The history of the pitbull breed goes back about 300 years old when it was created in the United Kingdom. Initially, the dog was bred to participate in dog fights, as well as for hunting large animals, including bulls. Pitbull Terriers are descended from the American Bulldog and Fox Terrier. As a result, mankind has inherited a dog which combines the best qualities of these breeds.

Dog fighting in England was banned in 1835, after which they stopped breeding pitbull terriers, because these dogs were considered dangerous to people. Pitbull breeders moved to America during prohibition and they started to register this “new” breed. As a result, the American Pit Bull Terrier dog has gained great popularity, but until now, in some countries this breed is prohibited from participating in exhibitions. 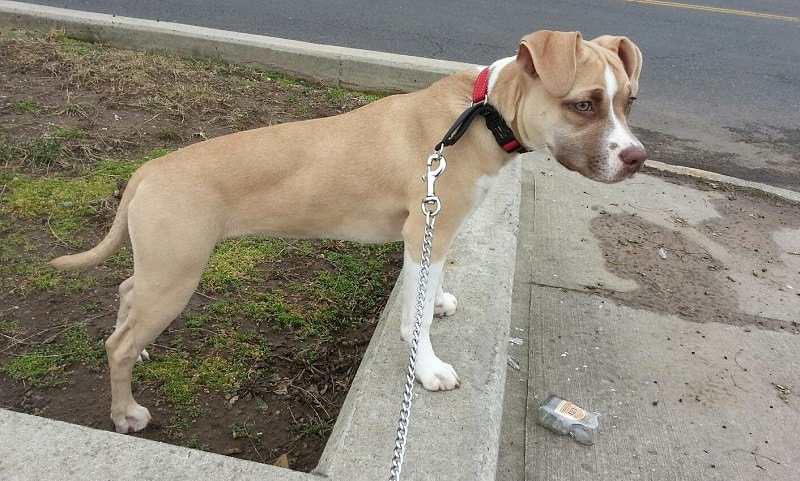 The appearance of a pit bull terrier

The physical appearance of the American Pit Bull Terrier projects the looks of a very strong and robust dog, thanks to its muscular constitution. The height at the withers in females of this breed is 44-48 cm and in males it’s in the 46-50 cm range.

The head of the breed is medium-sized, rectangular, with wide muzzle and strong jaws. The bite of a Pit Bull Terrier is scissor-shaped, the ears are set high and they are often cropped.

Their eyes are almond-shaped, located at an average distance from each other. The coat color can be different, from white to dark brown and black. The coat is short and rough to the touch.

Pitbulls have a strong neck, powerful chest, and a tail that tapers towards the end, sometimes docked. The paws are medium in size, the back is short and strong, while the dog is active and agile. 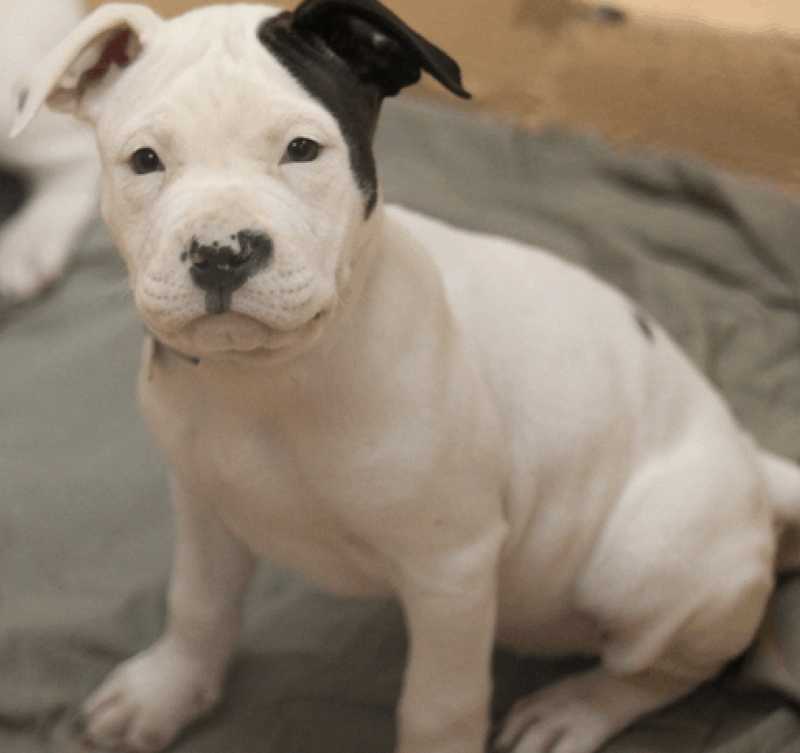 Pitbulls are suitable for small or larger living spaces but this dog should not be chained as it may become aggressive. Pitbulls are quite active and need daily walks and intense physical activity. This is particularly important as they tend to be overweight.

Their coat is short, therefore they do not need frequent combing. You can bathe a pit bull terrier once every six months. It is necessary to check the dog’s eyes and teeth daily, brush them, and cut the nails. It is very important to get the dog accustomed to these procedures at an early age.

You can feed the Pit Bull Terrier with both food for large dogs and natural food. Puppies should be fed 4-5 times a day while 2 times a day is appropriate for an adult, subject to appropriate calorie intake.

It is very important that the diet be balanced and the dog gets all the necessary vitamins. Sometimes the pitbull needs to be given vegetables and cartilaginous bones to promote the good health of the teeth. The diet should not contain sweet and starchy foods, but cereals and meat are needed, except for pork.

But, as a general rule, you should never force your dog to eat food that he does not like and take into account his diet preferences, within acceptable norms of course!

Owning If an American Pit Bull Terrier lives in your home, devote a lot of time to it, then it will live for a long time, about 12 years. 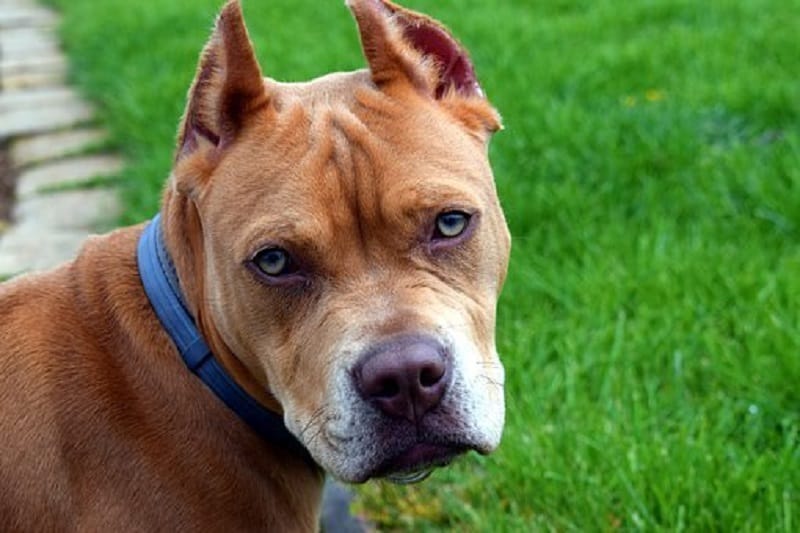 It is very important to monitor the condition of your dog, despite his appearance of strenght, as he may be prone to allergic conditions. In that respect, proper nutrition is the key to success, but not everyone knows how to manage a Pitbull’s diet. The dog needs vitamins, because it is not always possible to get them from food, so consult your veterinarian for proper advice.

Pitbulls are very active and often suffer from heart disease such as dirofilariasi and demadecosis. Prevention of these problems is much easier than having to treat them after the fact.

Symptoms of heart disease in pitbulls may include wheezing and coughing. The dog stands with its front paws spread wide, head bowed, refuses to lie down and breathes heavily. A pitbull can lose consciousness for a few minutes while walking and fall down.

It is imperative to undergo a cardiological examination, do an ECG, an ultrasound of the heart. Quite often, heart failure is acquired if appropriate rest periods are not observed during the treatment of infectious diseases. 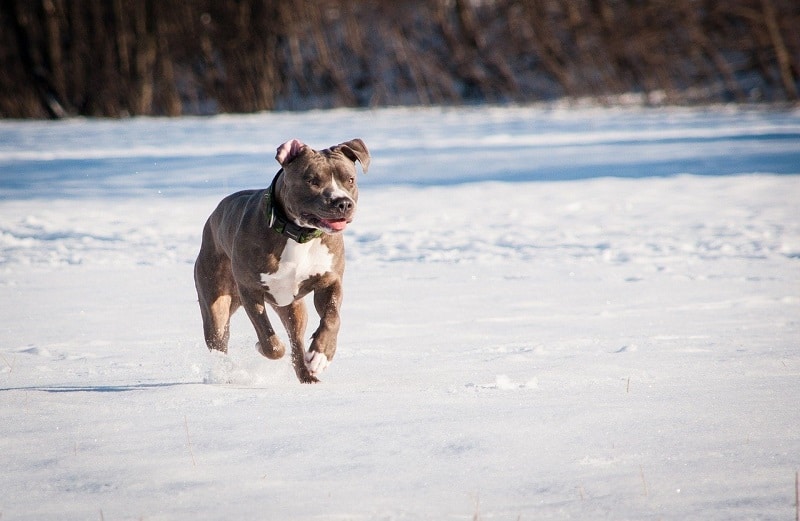 Cases of piroplasmosis in pitbulls have been steadily increasing. The main vectors of this disease, more commonly known as canine babesiosis, are hard ticks. However, after a week of treatment, the pitbull usually begins to feel relatively well.

Dogs can develop leptospirosis if their mucous membranes get in contact with infected substances such urine or contaminated water. In 90% of cases, complications from leptospirosis will lead to cardiovascular failure. Being an energetic dog, the Pitbull begs the owner to go out to jump and run but for a period of 30 days he should be limited to leisure walks on a leash.

In recent years, cases of dogs infected with dirofilariasis (heart worms) have been quite common. Dogs become infected by the bite of a mosquito (which is a carrier). In addition to the heart, the liver is affected and renal failure as well as ascites (fluid in the abdominal cavity) may develop.

In early spring, start a prevention protocol by treating the dog mosquito repellents that are not toxic when licked off (bio-repellents suitable for children). 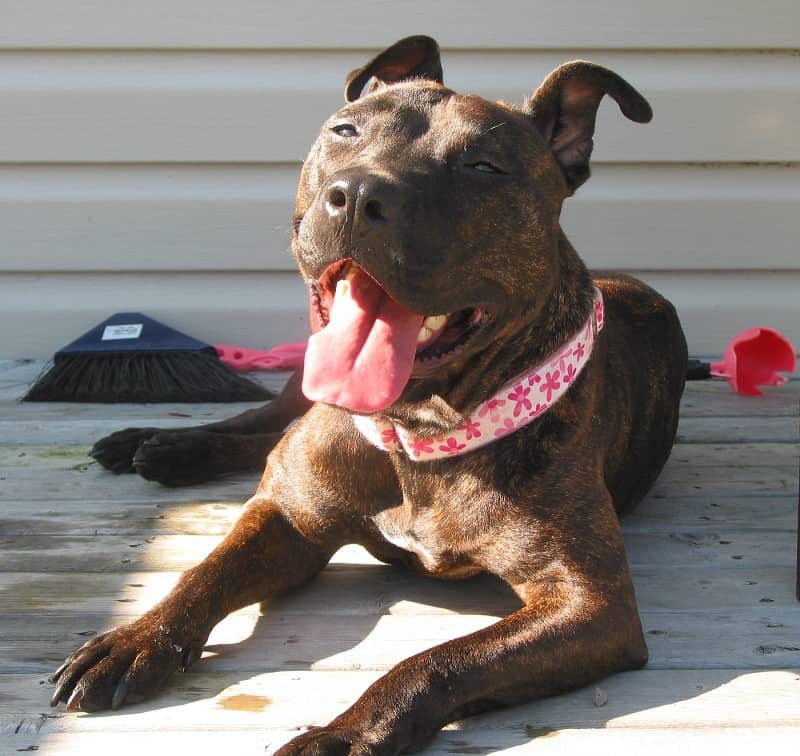 Demodicosis is amongst the most common pitbull health issues. The causative agent of the disease is a tick that infects and lives in the hair follicle. The dog has bald patches, as a rule, on the elbows and, muzzle (around the eyes).

These areas begin to severely itch. Waste products of the tick and combing can also lead to a secondary infection (up to Staphylococcus aureus).

The infected spots begin to merge and fill with a crimson color and the size of the affected skin keeps growing. At the very beginning of the disease, it is important to scrape the skin to collect samples of the tick. After examining it under a microscope, the veterinarian will diagnose and prescribe the appropriate treatment.

However, a pitbull with a strong immune system is less susceptible to this disease. Therefore, don’t hesitate to provide your dog with natural supplements promoting a healthy immune system.