German boxers are loved for their cheerful character, intelligence and dedication. However, Boxer dog health issues are a factor to consider if you are looking at owning this dog breed.

Despite their belligerent appearance, Boxers are the kindest and affectionate dogs that take every opportunity to be close to their owner. Boxers are good at performing their duties, but they can also be just pleasant companions. Before diving into potential health problems of the breed let’s take a brief look at its origin.

The origin of the breed

It is believed that the progenitors of German boxers were Bullenbeisers living in Central and Western Europe. Having a relatively small size, they were characterized by extraordinary mobility and fearlessness. These qualities made it possible to use them for hunting large game and baiting bulls. Dogs similar to modern German boxers are found in 17th century history. 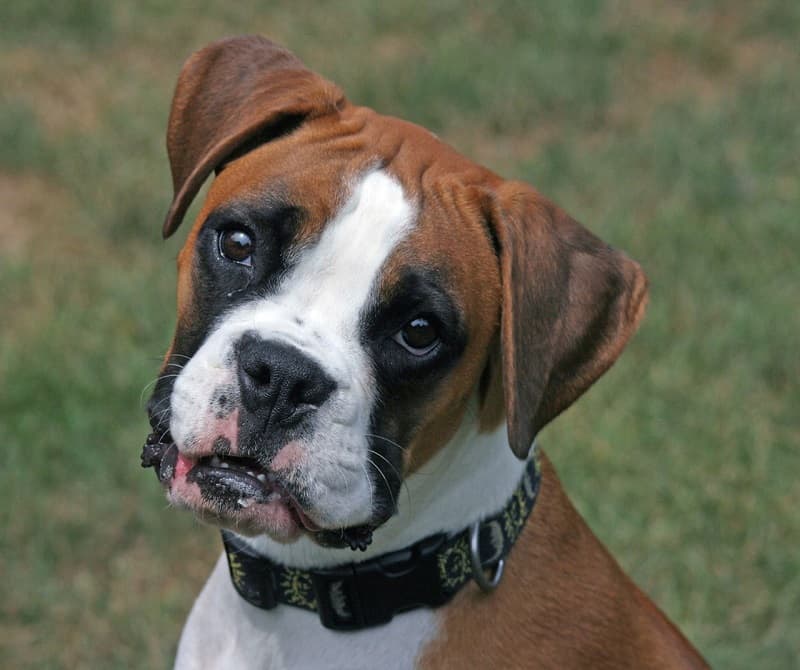 The first dogs were bred in 1850 in Munich. The breeding involved dogs with by rare courage and excellent fighting qualities such as mastiffs, bullenbeisers and bulldogs. The final creation period of German boxers dates back to 1896, when the breeders managed to get a breed that combines strength and power, developed intelligence and healthy aggressive behavior.

German Boxers are medium sized dogs. They are characterized by a stocky physique, dry muscles with a relief clearly protruding under the coat. Males weigh from 27 to 32 kilograms, height at the withers of up to 63 centimeters. Bitches are more miniature with typical weight in the 25-29 kg range and height at 53-60 cm. 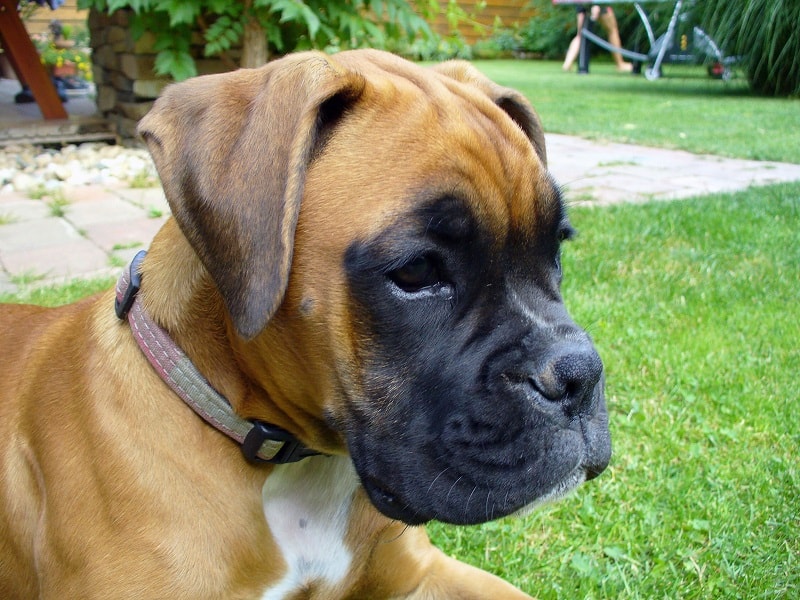 According to the standard, German boxers have two colors, brindle and red. Gray, black, and others are considered cross breed dogs. White markings on the coat are acceptable and give the exterior a more aesthetic appearance.

German boxers cannot be counted among the centenarians, as they rarely reach the age of 10 years. The immune system of the breed is generally not very strong, therefore they are often hypothermic, prone to colds, allergies, and demodicosis.

A common disease in boxers is hip dysplasia, characterized by pain and lameness. In more serious cases, it leads to complete paralysis. Pathology is difficult to treat and most often surgery is required.

Boxers are often diagnosed with brachiocephalic syndrome, which is characterized by hoarse breathing, shortness of breath, and severe snoring during sleep. This is caused by the structure of the muzzle. Breathing problems and suffocation episodes are worse during intense exercise and in hot weather. Quick and immediate treatment is required.

Like other large dogs, Boxers are inclined to overeat, so food intake must be controlled. Gluttony leads to volvulus and other pathologies that can only be eliminated through surgery.

One of the most often Boxer dog health problems observed is hypothyroidism. Thyroid dysfunction significantly reduces the quality of life, contributes to a deterioration in appearance, and leads to infertility and obesity. To eliminate the disease, substitution therapy is prescribed.

Boxers’ congenital diseases include eversion (volvulus) of the eyelid, which can be corrected through surgery. In some puppies with a predominate white coat, complete or partial deafness is often diagnosed (up to 40% of the population).

German boxers are prone to cardiac diseases, the most common of which are arrhythmogenic right ventricular cardiomyopathy, aortic stenosis.

In older boxers, they often develop cancer and this is also due to a weak immune system. According to veterinarians, this is one of the breed that is most susceptible to the development of malignant neoplasms. 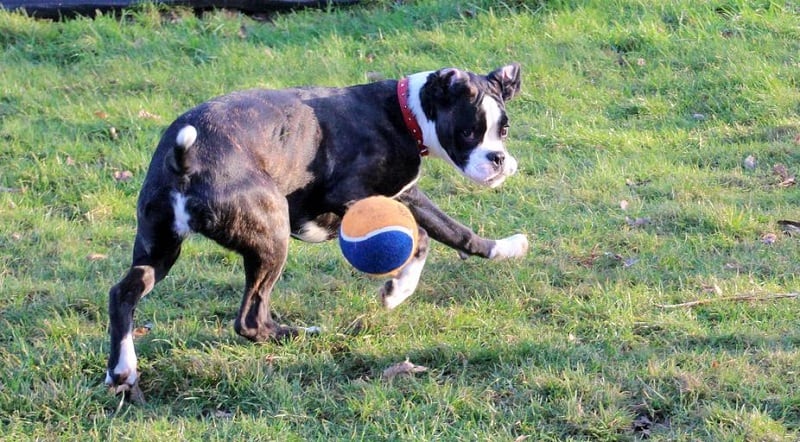 providing the necessary care for german Boxers is generally easy and even inexperienced dog owners can appropriately attend to the needs of their dog to keep him healthy and happy.

Particular attention should be paid to the skin of the facial area. The folds and the nose should be cleaned on a regular basis to remove food debris and moisture.

The coat should be combed 1 to 2 times a week using a silicone or rubber brush. Brushing has a relaxing effect, improves blood circulation, and removes dirt and dead hair. The dog should be trained to put up with the grooming at an early age.

You do not really need to bathe boxers often, once every six months will suffice. Unscheduled bathing is organized only in exception cases where the boxer was heavily exposed dust, mud, dirty water or other substances. If you wash your boxer, set the water temperature at a maximum of 32 degrees celsius. For hair care, it is advisable to use special shampoos with a lower pH level. 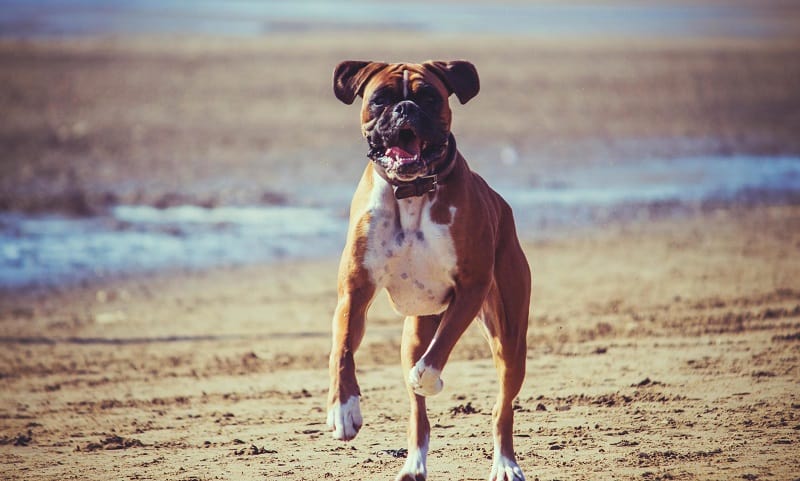 After walks, the boxer’s paws should be wiped with a damp cloth, examined for scratches, abrasions, and cuts. Their pads are quite strong, but, nevertheless, they are often injured.

Regular clipping of the nails (once a week) will relieve the pet from discomfort when walking and prevent the curvature of the nail plate.

When walking in cold weather, it is advisable to put warm clothing, such as a vest, on the boxer. Dogs are prone to colds, and the short coat does not protect from the cold unless they are very active.

Like any other breed, German Boxers have advantages and disadvantages that must be considered in order to avoid unwanted consequences.

Dog handlers do not recommend getting a German boxer if you have a busy life. In the absence of the owner, this kind and loyal breed will get bored, which can lead to depression. If you have a lot of free time and are ready to provide enough attention to your boxer, you can be sure that this charming and affectionate breed will become your loyal friend and will reliably guard your home!