Husky body language signs can sometimes be difficult to understand. It’s quite normal as dogs and humans don’t speak the same language.

We are all very aware that language differences are a major barrier to communication. A unilingual Francophone will have a lot of difficulty discussing with a unilingual Anglophone, for example. Of course, non-verbal language can help them, but the message lacks precision, and we can never be sure that we have correctly decoded what the other wants to tell us. This often results in frustration, and even anguish if this message is important, as much for the sender as for the receiver of this message. 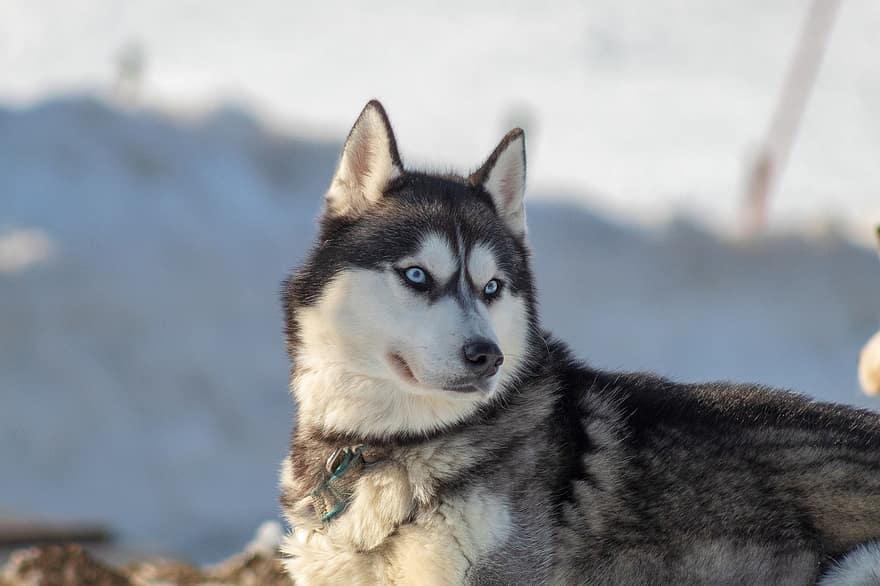 This is also true between a human and his dog. The difference in language is obvious. Of course, we teach part of our language to our husky (sit, lie down, stay, give a paw, etc.) and we learn from his (wag his tail: he is happy, growls: he is angry, etc.). Nevertheless, the message can often times be blurry and can be a challenge to decode, leading to important miscommunication.

In addition, we demand, as a human and a master, that our husky understands what we ask him, that he learns our language. However, we often neglect to hear his, except for a few of his more common “expressions”. However, understanding what our dog tells us allows us to partly know his moods, what he wants, what he feels. A relationship is always much more enjoyable and less frustrating when both sides can effectively communicate with each other.

Husky body language signs represent his main way of communicating his message and feelings. By carefully watching our husky, we can learn a lot about our relationship, and how he perceives his environment. We can sometimes predict his behavior and intentions. In fact, these signs allow us to understand our dog much better. 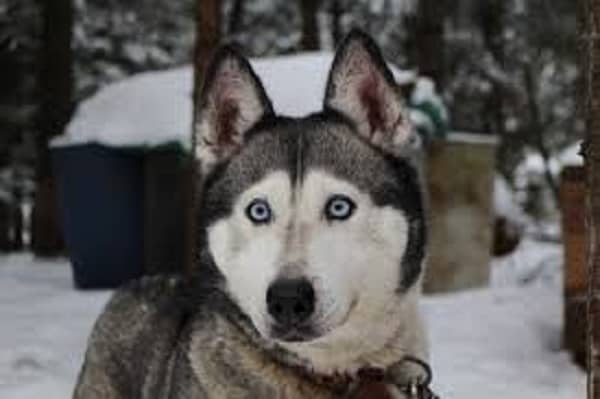 Below, you will find 25 Husky body language signs you should learn to recognize and interpret. The language can vary somewhat (e.g. positions of the ears and the tail). This list is far from being exhaustive but covers all the basics. If you learn these signs to perfection, you will be on your way to a much better understanding of your dog and an enhanced relationship.

Please note, that in my opinion, the position of a dog in relation to another dog is not, on its own, a reliable indicator of the real relationship between these dogs (dominant versus submissive). When a dog appears submissive, I prefer to view his behavior as an intent to avoid confrontation.

As for humans, the dog can yawn to oxygenate the brain (upon waking up for example) but it is also and above all a signal of appeasement, which means that for one reason or another, if the dog is uncomfortable or worried, yawning will allow him to calm down. 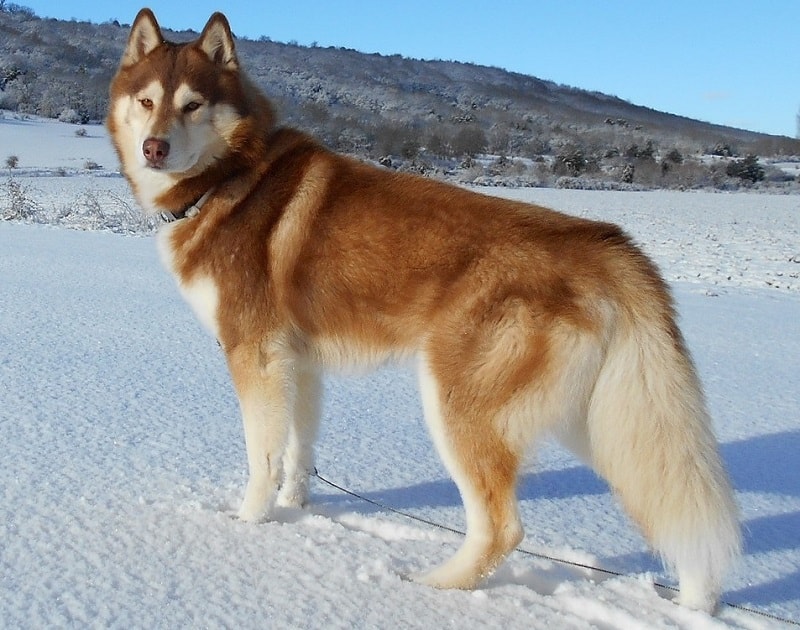 Can a conclusion be drawn from this Husky body language sign? None, except the dog is excited. It is therefore wrong to believe that if you approach a dog wagging its tail, he can get overexcited and bite you.

The Husky senses a threat but does not want to be seen as threatening others.

The dog senses a significant threat, he is ready to defend himself but does not currently intend to bite.

Your Husky friend senses a significant threat, he is ready to defend himself and intends to bite. 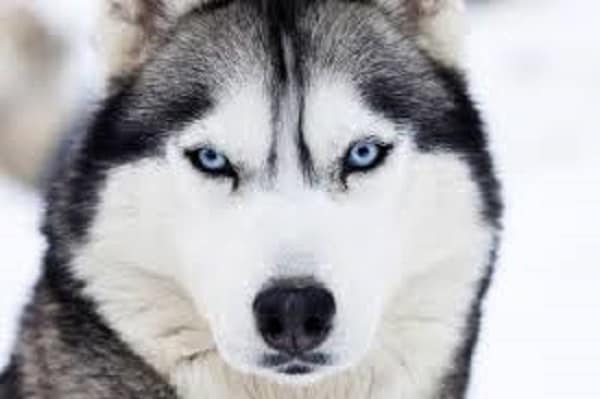 The Husky who looks away in front of another dog or a human sends a sign of appeasement, he does not want a confrontation.

6) Turns his head away: signal of appeasement

7) Front of the body lowered and behind raised: call to play

The dog wants to play, he invites the other (human or dog) to come and play with him.

The interpretation of this Husky body language sign depends on the situation and may indicate appeasement when his head is down, to the side, and looks away (often seeking attention), or is a sign of dominance when his head is held high and he’s staring at you.

Depending on the situation it can either be a sign of submission (most often), when a dog will spontaneously lick the other’s mouth, often with his head down or a sign of dominance. After a confrontation or a fight, the dog who won will lick the mouth of the loser, and if he tolerates it it means he accepts the dominance of the other dog.

The dog is uncomfortable and tries to calm down.

The dog is stalking prey.

12) Puts his head on another dog’s back: a sign of dominance

If the other dog accepts, he agrees to submit (unless it happens while playing). 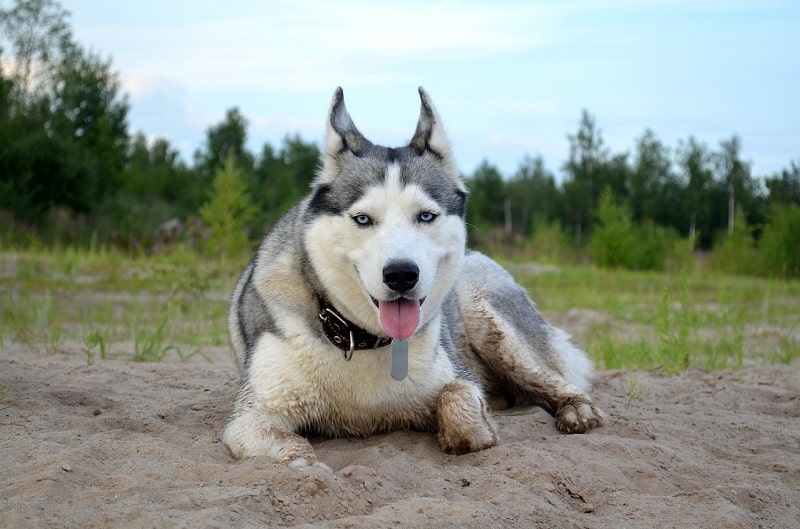 13) Puts one or 2 legs on the back of another dog: sign of dominance

If the other dog accepts, he agrees to submit (unless it happens while playing).

This sign depends on the situation and most of the time needs to be interpreted with the signals. Either your Husky is uncomfortable, fearful, or showing signs of submission.

16) High tail: the dog is sure of himself and at ease in his current environment

17) Low tail: the dog is hesitant and unsure of himself

18) Tail between the legs: your dog is afraid!

This signal is often times observed at the same time as the Husky is looking away and shows discomfort and anxiety. 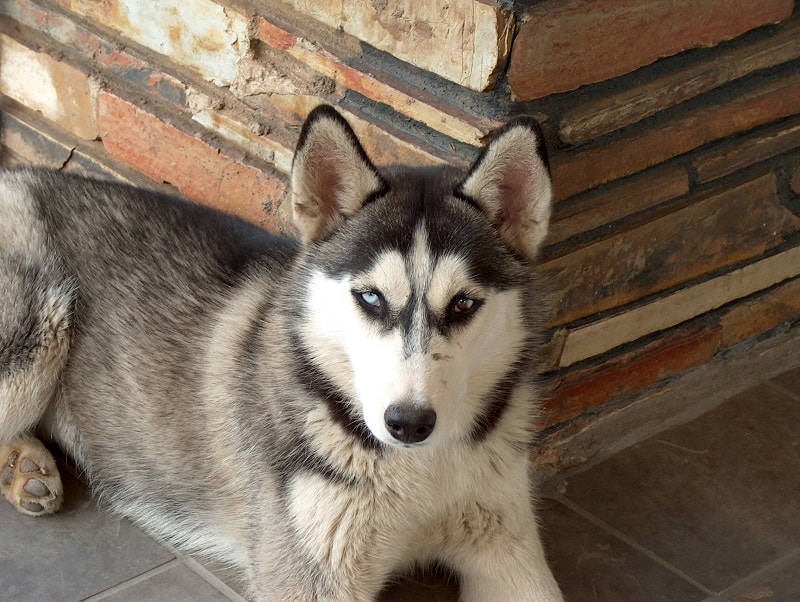 20) Sits down: Signal of appeasement or submission

Your dog is either sitting when he gets closer to a human or another dog or human or turning while turning. The dog is uncomfortable and tries to calm down and/or calm the other party (dog or human) or is being submissive.

21) Goes to bed: Signal of appeasement and/or submission

The dog is uncomfortable and/or wants to avoid confrontation.

22) Lies on your back: submission

The dog wants to avoid confrontation (except if he behaves that way while playing).

The dog is uncomfortable and tries to calm down.

24) Supports the gaze of a human or another dog.

This is a Husky body language sign indicating a position of dominance, with the exception of situations where something or someone is attracting his attention.